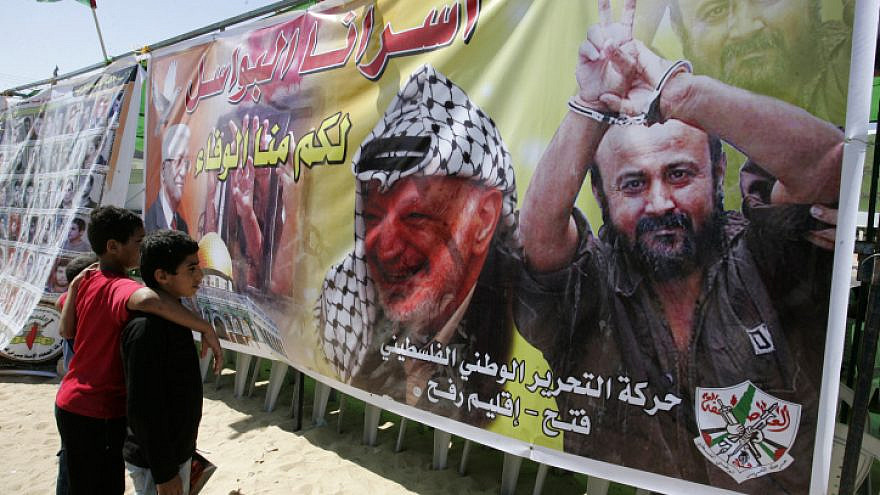 Palestinian children look at the image of PLO chief Yasser Arafat and terrorist Marwan Barghouti during a demonstration in the southern Gaza Strip calling for the release of prisoners held in Israeli jails on Oct. 6, 2011. Photo by Abed Rahim Khatib/Flash90.
Spread the word.
Help JNS grow!
Share now:

(March 31, 2021 / Israel Hayom) Convicted Palestinian arch-terrorist Marwan Barghouti, who is serving five life sentences for his involvement in deadly terrorist attacks on Israeli civilians during the Second Intifada, will run his own list of candidates against members of Palestinian Authority leader Mahmoud Abbas’s Fatah party.

The development came one day before the candidate deadline expired on March 31. Barghouti, who has reportedly mulled his entry into Palestinian politics for months, could pose a serious threat to Abbas’s hold on power in Ramallah.

Barghouti’s wife, attorney Fadwa Barghouti, said that the new list will include more Fatah activists who wish to break away from the party’s line, as well as other independent candidates.

His brother, Muqbil, told Qatar-based Al-Araby TV that the decision was made after Abbas’s Fatah party failed to honor previous agreements.

“The decision came after it was confirmed to Marwan Barghouti that the Fatah movement did not comply with what was agreed upon with regard to choosing the names on the movement’s list,” he said.

Barghouti is a widely popular figure in the West Bank and, according to recent opinion polls, would likely win in a head-to-head election against the aging Abbas.

A recent poll showed Barghouti’s independent party taking 28 percent of the vote, while Abbas is currently at 22 percent. There are at least 25 groups taking part in the upcoming election, including Hamas and exiled Abbas rival Mohammad Dahlan.

Fatah had sought to persuade Barghouti not to run, while rival factions have attempted to persuade the popular prisoner to join their ticket.