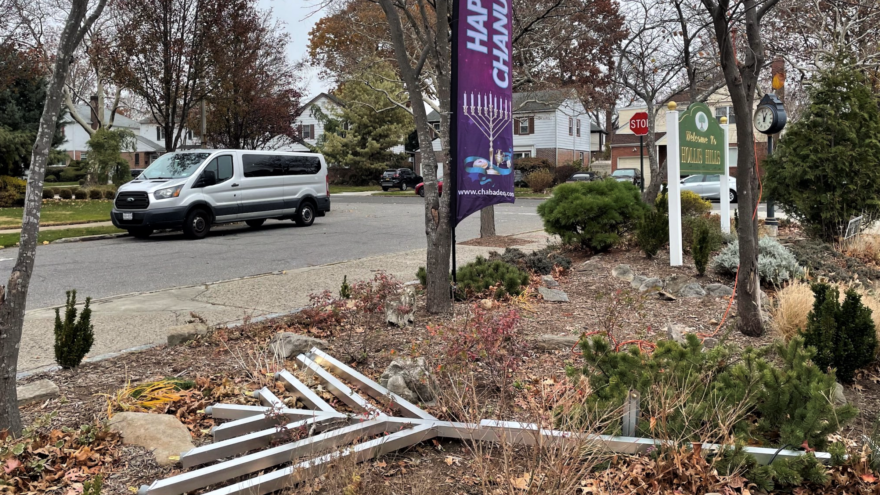 A menorah erected by Chabad of Eastern Queens, N.Y., during Hanukkah 2021 was knocked down, the second time a menorah placed at that particular location in the Hollis Hills neighborhood was damaged; the first incident occurred in 2014. Source: Twitter/New York State Sen. John C. Lui.
Spread the word.
Help JNS grow!
Share now:

(December 10, 2021 / JNS) At the start of Hanukkah this year, a menorah put up by Chabad of Eastern Queens in New York City was knocked down by an unknown vandal. It was the second time a menorah placed at that particular location in the Hollis Hills neighborhood was damaged; the first incident occurred in 2014.

U.S. Rep. Grace Meng (D-N.Y.), who represents the New York City borough of Queens, was among politicians who spoke out against such desecration.

“I condemn this despicable act of vandalism as the Jewish community celebrates Hanukkah. There is no place anywhere in our society for anti-Semitism and hate, particularly here in Queens, where we welcome and embrace great diversity throughout our borough,” she said. “We will not tolerate this disgusting and cowardly behavior, and we must continue to call out these crimes. Those responsible must be held accountable.”

It was hardly the only area subject to anti-Semitic incidents and vandalism during the eight-day holiday.

A city holiday display in Medford, Mass., included a “backward-facing menorah and an explanation of the candles’ symbolism that included Christian references”; a 460-pound steel menorah in Lancaster, Pa., was damaged by vandals; and a rock was thrown through the window of a house in Baltimore moments after a family lit their holiday candles.

On the West Coast, a man stole a six-foot-tall menorah outside a home in Hollywood, while an anti-Semitic leaflet was found at the base of a menorah in the heavily Jewish Beverlywood neighborhood of Los Angeles.

Outside of the United States, the Combat Antisemitism Movement (CAM) recorded at least 17 “anti-Semitic incidents specifically tied to public menorah displays or other Hanukkah celebrations.” The group noted six different menorah desecrations across Ukraine and two incidents in Germany. In Hof, Germany, a menorah put up outside St. Mary’s Church was hit and damaged by a truck, the second such incident at the location since 2019. Also in Germany, a menorah on display in central Nuremberg was damaged twice by vandals.

In London, a group of Jewish teens celebrating Hanukkah were subjected to anti-Semitic slurs as Palestinian supporters slammed on the windows of the bus they were riding to a celebration.

In a release issued on Friday, CAM noted that in the past week, there were “67 new media reports of anti-Semitic incidents—a 36.9 percent increase over last week.”

The organization broke the incidents down this way: 35 came from the far-right; 10 from the far-left; 11 “with Islamist motivations”; and 11 that were “unidentifiable in nature.”

“CAM is concerned, but not surprised by the uptick in anti-Semitic incidents during the Hanukkah holiday. As anti-Semitic views have moved from the fringes and become increasingly mainstream and tolerated, Jewish communities worldwide should remain vigilant, but feel confident to publicly celebrate their Jewishness while enhancing security and working with law enforcement,” said CAM executive director Sacha Roytman Dratwa.

He added that “we are heartened to see an increase in attention in the struggle against all forms of contemporary anti-Semitism by political leaders, law enforcement and members of civil society. In that spirit, we ask people of good conscience the world over to rededicate themselves to building a more tolerant and inclusive society.”