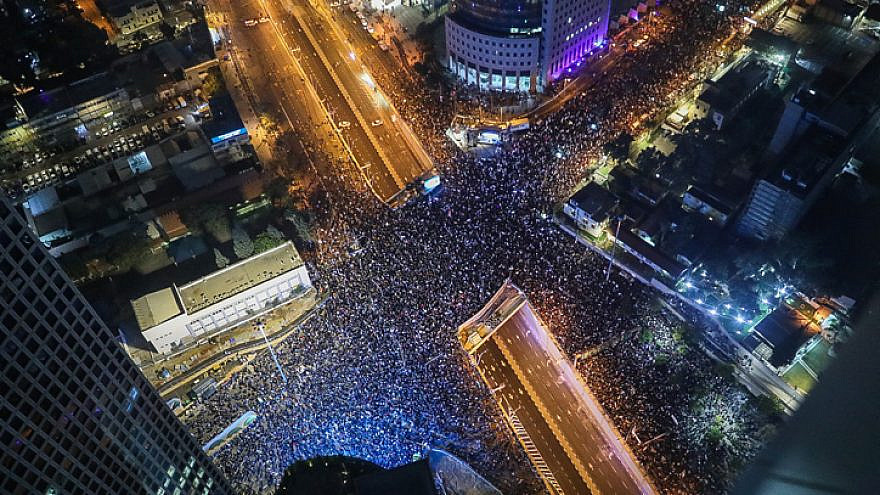 Tens of thousands of Israelis protest against the proposed changes to the legal system in Tel Aviv, Jan. 21, 2023. Photo by Flash90.
Spread the word.
Help JNS grow!
Share now:

(January 22, 2023 / JNS) Tens of thousands of people took to the streets in Tel Aviv on Saturday evening to protest against the government’s planned judicial reform.

It was the third mass rally in as many weeks, and the largest. The main demonstration took place at the intersection of the Azrieli towers. Police cordoned off the main roads to permit the demonstration to take place.

“People who love the state came here to defend the state, its democracy and its courts,” opposition leader Yair Lapid told demonstrators in Tel Aviv .

Moshe Ya’alon, former politician and IDF chief-of-staff, and one of the protest leaders, told Channel 12 that “the nation of Israel woke up and won’t let his happen,” referring to the plan of the Netanyahu-led government to rein in the Supreme Court, which it views as having overstepped its authority.

The organizers hinted on Sunday that they intend to go further than demonstrations and their next step will involve acts of civil disobedience, Channel 12 reported.

“We are on the way to escalation. It is clear to us that this protest will lead to the disruption of public order and shutdowns in the private sector and the economy in general. There will be actions to disrupt public order that will send a message to the government that the coup will not be on our watch. There will be a warning shutdown,” the organizers said.