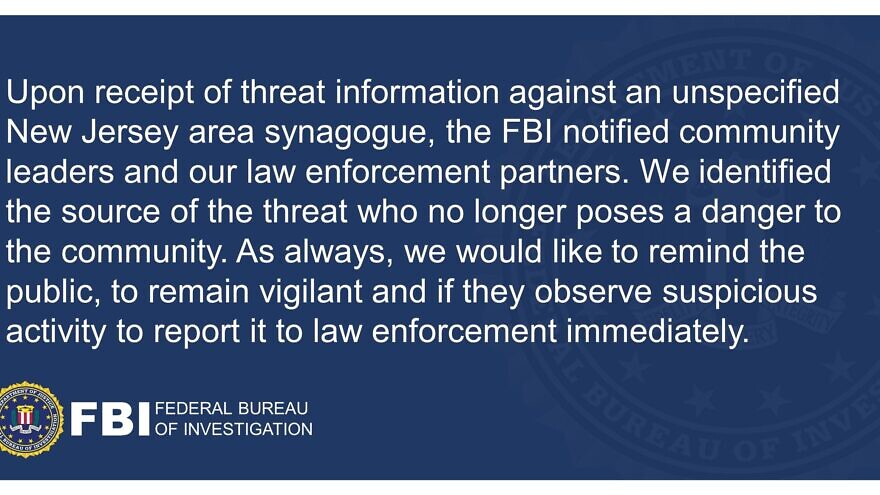 Alkattoul was charged with one count of transmitting a threat in interstate and foreign commerce.

“No one should be targeted for violence or with acts of hate because of how they worship,” said Sellinger. “According to the complaint, this defendant used social media to send a manifesto containing a threat to attack a synagogue based on his hatred of Jews. Along with our federal, state and local law enforcement partners, we acted swiftly to respond to the alleged threat.”

Law enforcement authorities questioned do not believe Alkattoul had the means to carry out any specific attack, AP reported. He told federal agents that he was angry with Jewish people because he’d been bullied in the past, a source told the news agency.

The FBI’s Newark Field Office, which first announced the threat last Thursday, posted a statement on Twitter on Friday saying, “Upon receipt of threat information against an unspecified New Jersey area synagogue, the FBI notified community leaders and our law enforcement partners. We identified the source of the threat who no longer poses a danger to the community.”

“While this specific threat may be mitigated, we know this remains a tense time for our Jewish communities who are facing a wave of anti-Semitic activity. We will not be indifferent. We will remain vigilant. We will take any and every threat with the utmost seriousness and we will stand up and stand shoulder to shoulder with our Jewish congregations,” Murphy said in a statement.

“This threat violated one of the most fundamental tenets of our nation— the right to worship according to the dictates of our consciences and our sacred and holy traditions. We will always endeavor to ensure that every New Jerseyan of every faith may continue to live, study, and worship without fear for their safety.”