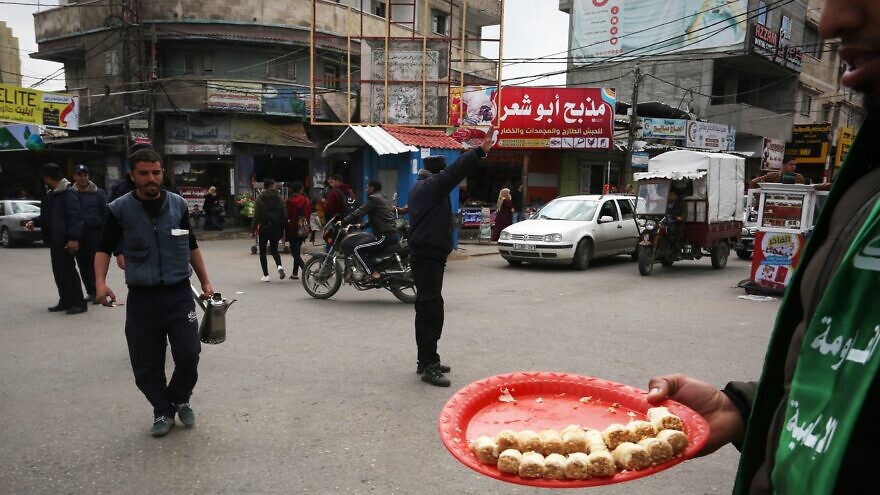 Palestinian supporters of Hamas pass out sweets in the street in Rafah in the Gaza Strip, following the terrorist attack where a Palestinian terrorist killed at least one man near Ariel, in the West Bank, on March 17, 2019. Photo by Abed Rahim Khatib/Flash90.
Spread the word.
Help JNS grow!
Share now:

(April 7, 2022 / JNS) Palestinian terror groups were seen celebrating the attack that has left two people dead and at least a dozen wounded in downtown Tel Aviv on Thursday night.

Hamas said the attack was a “natural and legitimate response to the escalation of the occupation’s crimes against our people, our land, Jerusalem and Al-Aqsa mosque.”

The terror group that rules the Gaza Strip added that it would “not allow the continuation of the occupation’s terrorism and crimes, and its attempts to Judaize Jerusalem and to make sacrifices in the courtyards of Al-Aqsa mosque to build their alleged temple, on the so-called Passover holiday.”

So far, no organization has claimed responsibility for the attack.

Meanwhile, as in the wake of previous recent attacks, men were seen handing out candy and other sweets in Palestinian-controlled areas to celebrate the attacks on Israelis.

“Masked men distribute sweets in Ramallah to celebrate the Tel Aviv operation,” according to a tweet from the Palestinian Al Asimah News.