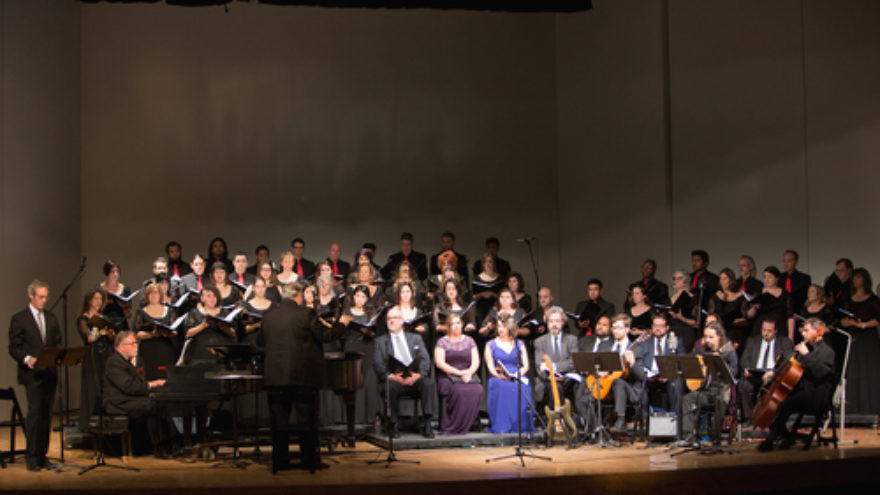 A performance of Neely Bruce’s oratorio, “Circular 14: The Apotheosis of Aristides,” named after Aristides de Sousa Mendes's issuing of thousands of lifesaving visas to Jewish and non-Jewish refugees against the Portuguese government’s “Circular 14,” which made it illegal for Holocaust refugees to pass through Portugal. Credit: Courtesy of the Sousa Mendes Foundation.
Spread the word.
Help JNS grow!
Share now:

(October 19, 2021 / JNS) Portugal honored Aristides de Sousa Mendes, a former diplomat for the country, who helped save thousands of Jews from the Nazis during World War II.

“People who at the decisive moment put their and their family’s safety at risk for the greater good are rare. Sousa Mendes was one of those people,” said Speaker of the Portuguese Parliament Eduardo Ferro Rodrigues, reported AP on Tuesday.

A tomb with his name was placed in the country’s National Pantheon.

Mendes disobeyed orders made by his superiors, including from dictator António Salazar, when he was a consul in Bordeaux, France. In 1940, he issued visas to those who feared that the Nazis would hunt for them. The Portuguese visas allowed Jews and others to escape via Lisbon on the way to the United States and other countries.

Mendes was fired as a result and died in poverty in 1954, according to the report. The Yad Vashem World Holocaust Remembrance Center in Jerusalem recognizes him as a Righteous Gentile and is noted in “The Righteous Among the Nations.”

In 2017, Portuguese President Marcelo Rebelo announced Mendes being given the country’s highest honor: the Grand Cross of the Order of Liberty.