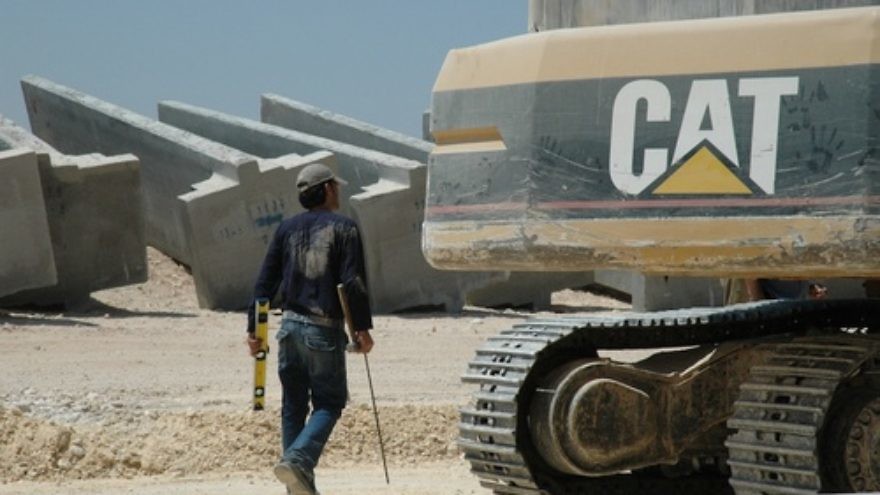 A Caterpillar bulldozer amid construction of the Israel's West Bank security fence. The Presbyterian Church (USA) General Assembly in July 2012 voted 333-331 against a resolution to divest from Caterpillar, Hewlett-Packard, and Motorola Solutions over those companies’ profit “from non-peaceful pursuits in Israel-Palestine.” Now, the Presbyterian Church's new study guide on the Arab-Israeli conflict has been accused of being a “hateful document” that “promotes the eradication of Israel.” Credit: Justin McIntosh via Wikimedia Commons.
Republish this article
914 WORDS
Spread the word.
Help JNS grow!
Share now:

Presbyterian Church (USA) has come under fire for its new study guide on the Arab-Israeli conflict, which critics contend is a “hateful document” that “promotes the eradication of Israel” by targeting the core tenets of Zionism and Christian Zionism.

The 74-page study guide, titled “Zionism Unsettled: A Congregational Study Guide,” was produced by the Israel/Palestine Mission Network of Presbyterian Church (USA) and released ahead of its national assembly in June.

“Every couple of years, in the run-up to the Presbyterian Church (USA)’s General Assembly, anti-Zionist activists in the denomination put forth a hateful document that assails Israel’s legitimacy and antagonizes Jews in the United States. It happened in 2010, it happened in 2012, and it happened again in 2014 with this document,” Dexter Van Zile, Christian Media Analyst for the Committee for Accuracy in Middle East Reporting in America, told JNS.org.

According to its website, the study guide and its companion DVD tackles “critical issues fearlessly and with inspiring scope” that “draw together compelling and diverse viewpoints from Jews, Muslims, and Christians in Israel, Palestine, the US, and around the globe.”

The study guide also seeks to confront “mainstream perceptions with important alternative perspectives frequently ignored in the media,” its website said. But B’nai B’rith International said in a press release, “Despite the rosy terms in which the church describes the guide, its description is profoundly deceptive. The church conceals the actual nature of the publication—engagement in vile revisionism of not merely Israeli, but Jewish history too—while exploiting fringe perspectives to legitimize polemics contrary to any understanding of genuine interreligious dialogue and peacemaking.”

Van Zile told JNS.org that the study guide promotes historical figures who have “lost the argument over the need for a Jewish state and then presents them as credible voices to non-Jews.”

“The authors of the document report these folks are ‘outside mainstream circles,’ which is another way of saying they have lost the argument with their fellow Jews,” he said.

Van Zile cited Israeli philosopher Martin Buber, who advocated for a binational state prior to Israel’s independence in 1948, as an example that the study guide uses to point “to a road not taken.” He explained that Buber’s philosophy, while coming from an honest direction, was flawed and eventually lost out to mainstream Zionism.

“Buber was afraid of Jews having power, because they would lose their innocence and their purity once they had it,” said Van Zile. “[The] problem is, a people can be free and sovereign or it can be innocent. It cannot be both. Israel has wielded power with a lot more responsibility than its adversaries.”

Rabbi Noam Marans, the American Jewish Committee’s (AJC) Director of Intergroup and Interreligious Relations, called the study guide “a devastating distortion of Jewish and Israeli history, aimed at nothing less than eradicating the State of Israel.”

“The study guide is reminiscent of medieval Christian polemics against Judaism, with the authors claiming to know better than the Jewish community how Jews define themselves. This is another example of the ongoing effort to demonize Israel by a cadre of people who want to see the dismantlement of the Jewish state,” Marans said in a statement.

Additionally, the Presbyterian Church’s Israel/Palestine Mission Network (IPMN) targets Christian Zionism, which has been influential in building support for Israel in the U.S. and other Western countries.

“With Zionism Unsettled, we are hoping to shine a light on the effects of Zionism as a political ideology that is justified by appeal to selective biblical texts,” Walt Davis, co-chairperson of the IPMN’s education committee and coordinator of its “Zionism Unsettled” project, told the anti-Israel website Electronic Intifada.

In particular, one of the study guide’s authors, Naim Ateek, claims Christian Zionism is a result of Christian guilt from centuries of Christian anti-Semitism. Ateek is co-founder and director of the Jerusalem-based Sabeel Ecumenical Liberation Theology Center.

“In its liberal Christian manifestations, Zionism serves as a ‘price-tag’ theology providing Christians with a vehicle of repentance for the guilt accrued during centuries of European Christian anti-Semitism culminating in the Holocaust,” Ateek wrote in the study guide.

“For decades the [Presbyterian Church (USA)] has opposed the evangelical blend of dispensationalism and Christian Zionism because it fuses religion with politics, distorts faith, and imperils peace in the Middle East,” Davis wrote in the study guide.

There has been increasing tension between mainline Protestant denominations and Evangelical Christians, with the backing of prominent Christian Zionists such as Pastor John Hagee and Pat Robertson, over Israel.

Van Zile contends that the Presbyterian Church study guide is the product of a small group of anti-Israel activists who use their influence inside the church to demonize Israel.

“The folks who lead this church in Louisville (site of Presbyterian Church USA’s headquarters) are quite willing to allow a small but vocal minority to demonize Israel and use the church’s brand-name to do it,” Van Zile told JNS.org. “They have behaved like this since 2004. Most of the denomination’s laity does not support these extremists, but their voice has not proven to be decisive.”

Nevertheless, the American Jewish Committee said it believes the Presbyterian Church is likely to pass a resolution supporting the Boycott, Divestment and Sanctions movement against Israel at its June meeting in Detroit.