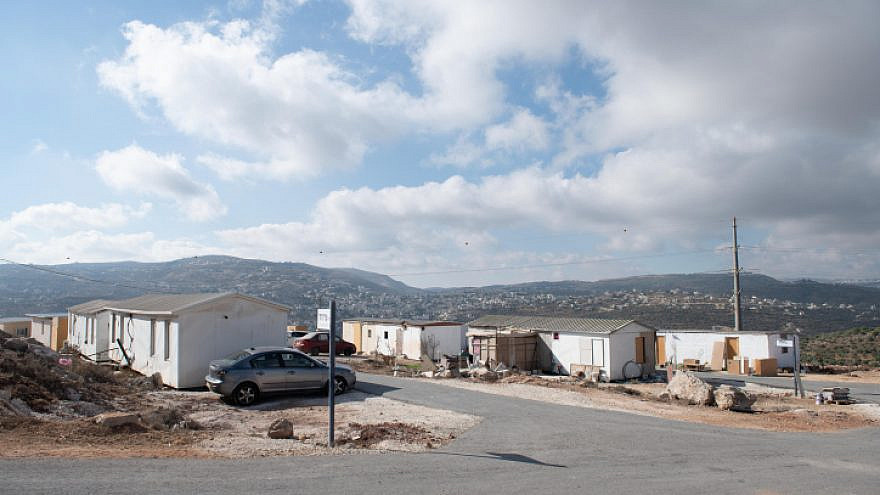 (June 21, 2021 / JNS) The IDF this week rejected the submission of master-plan documents towards full legalization sent to the Civil Administration by the Shomron (Samaria) Regional Council on behalf of the small community of Evyatar, which is under their jurisdiction, leaving residents scrambling to prevent the forced evacuation of the community and destruction of their houses in the days ahead.

Evyatar, home to more than 30 families near Tapuach Junction, was originally established in 2008, but was taken down. It was recently re-established as a response by activists to the May 2 drive-by shooting at the junction by an Arab terrorist that claimed the life of 19-year-old yeshivah student Yehuda Guetta and wounded two other students, one seriously.

The community was originally founded in 2013 and named in memory of Evyatar Borovsky, a father of five, who was also stabbed to death by a terrorist at the same junction.

A statement released by the authorities in Judea and Samaria indicated that the IDF Central Command viewed the newly established structures in Evyatar as being “illegal” and causing a “disruption of public order” in the area.

Earlier this month, a Demarcation Order was signed by Defense Minister Benny Gantz, preventing any further building and thus signaling his intention of evacuating the community. However, then-Prime Minister Benjamin Netanyahu called for the community to be fully legalized as he insisted that it was not built on private Palestinian property.

This past January, JNS reported that Netanyahu advanced hundreds of housing units in Judea and Samaria, indicating that Evyatar was on the list of locations to receive building permits.

Chagai Vinizky, one of the attorneys representing the residents of Evyatar, told JNS that the Civil Administration is discriminating against Israeli communities. Vinizky is a law professor at the Sha’are Mishpat College of Law and Science, and at the Hebrew University of Jerusalem, who specializes in property laws in Judea and Samaria.

“There are 800 illegal Palestinian outposts (extensions of existing communities) in ‘Area C’ and only 74 Israeli ones, but the only issue the authorities have is against the Israeli ones,” he said. “We know for a fact that Evyatar is not situated on private [Arab] land because nobody worked on it agriculturally for the past 10 years.”

Yisrael Medad, a veteran “resettlement” activist who resides in Shiloh, told JNS “the main claim of the proponents to allow Evyatar to remain in place is that the land has unproven private ownership and has not been worked for over a decade. Opposing that is a claim that the area is admot seker, meaning it has not been surveyed, and so it cannot be proven one way or the other if it is private property or not.”

Medad said “the IDF now asserts that the current Arab rioting makes it unworthwhile to keep Evyatar in place as troops are needed for other concerns. What is obvious is that the legal department of the Civil Administration has been shown to be negligent.”

He also noted that “one cannot avoid the disappointment in the realization that similar and even worse construction by Arabs of thousands of structures, roads, etc., were overlooked by the Civil Administration these past years with no legal actions taken.”

On the other hand, Hagit Ofran, co-director of the Settlement Watch project of Peace Now, told JNS that “this outpost must be evicted because it is bad for Israel. A small group of people are creating facts on the ground that dramatically affects Israel’s security and foreign policy without any authority.”

According to her organization’s statistics, “in recent years, Israel has demolished in average 145 homes of Palestinians per year, leaving thousands of people without homes, while the number of settlers real homes demolished was nearly zero.”

Ofran insisted that “this is not a legal matter but a political one, and we should all bear in mind that ‘Area C’ is occupied territory and not part of Israel.”

Naomi Kahn, director of the international division at Regavim, a research-based think tank and lobbying group dedicated to preserving Israel’s resources and sovereignty, told JNS that if the IDF takes down Evyatar, then it must be even-handed when it comes to other construction.

“We hope that the recent decision regarding Evyatar will serve as a precedent for equally vigorous, precise and prompt law enforcement throughout all areas under the jurisdiction of the Israeli government and judicial system—from Khan al-Ahmar to the Negev, from the north to the south, and in Judea and Samaria. Unfortunately, when similar court decisions and administrative orders have been handed down in cases of illegal Arab construction, enforcement has been ‘suspended’ through bureaucratic and legal procedures and loopholes.”

“The only thing worse than lawlessness,” she said, “is selective law enforcement.”

Vinizky explained that normally when the IDF issues an evacuation decree of this type, time is given for a motion to be filed in court by the community members in order to try and rectify the situation. However, he said that in his case, his legal team was not given an option for such a move.

With Evyatar’s fate in the balance, Vinizky said that his team is considering filing a petition with Israel’s High Court of Justice in order to prevent an evacuation.