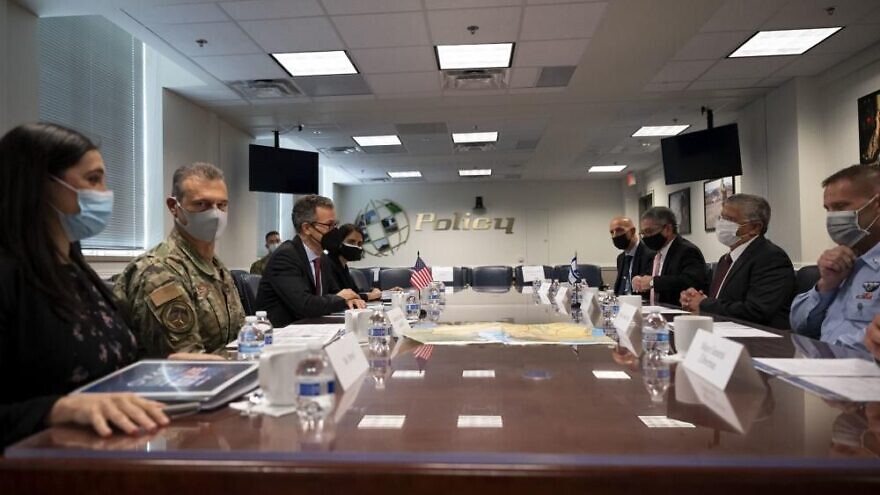 (August 26, 2021 / JNS) A senior delegation from Israel’s Ministry of Defense took part in a two-day annual dialogue with U.S. counterparts in Washington, D.C.

“The leaders discussed global and regional security challenges with a focus on the threats posed by Iran—entrenching itself across the Middle East, supporting terrorist militias and threatening regional stability while also pursuing a nuclear weapon,” it said. “The parties also discussed the IDF’s force build-up and defense procurement as part of the military’s multi-year plan. They also agreed on the need to enhance multilateral security cooperation between Israel and her neighbors.”

According to the Israeli Defense Ministry, the annual U.S.-Israel Defense Policy Advisory Group was hosted from Aug. 24 to Aug. 25 by Under Secretary of Defense for Policy Colin Kahl.

The Israeli delegation was led by Maj. Gen. (Res.) Amir Eshel, director-general of the Defense Ministry and a former Israeli Air Force commander.

“Established in 1999, [it] is the most senior-level defense policy dialogue for Israel Ministry of Defense and Department of Defense officials to address areas of mutual security interest and concern, advance bilateral defense cooperation and support Israel’s security needs,” said the statement.