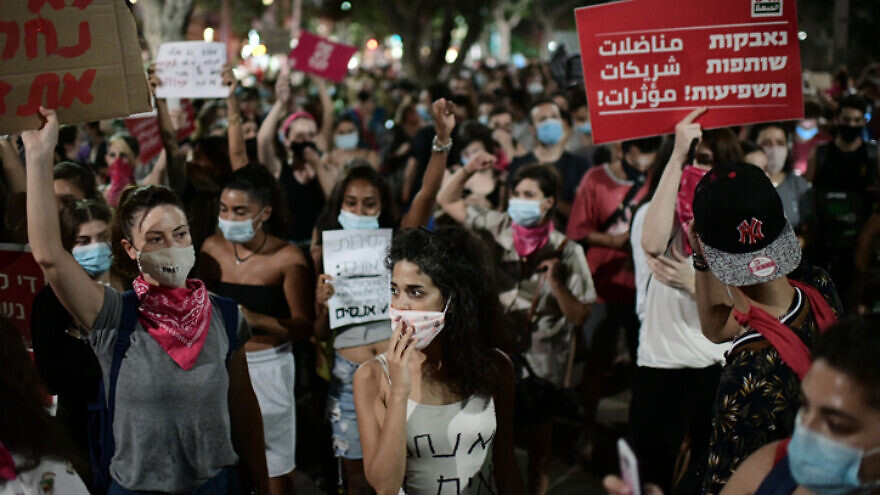 Israelis take part in a demonstration in support of the 16-year-old victim of a gang rape in Eilat a few days ago, in Tel Aviv. Aug. 20, 2020. Photo by Tomer Neuberg/Flash90.
Spread the word.
Help JNS grow!
Share now:

(August 23, 2020 / Israel Hayom) The Israel Police on Sunday arrested seven minors suspected of participating in an alleged gang-rape of a 16-year-old girl last week in the southern resort city of Eilat. The incident sent shockwaves through Israel, earning widespread condemnation from lawmakers, public figures and women’s groups. The Southern District Police formed a special task force to investigate the case.

By tracking text messages sent to the victim, the police arrested two suspects almost immediately. Both have implicated themselves in the incident, with one confirming that the girl was heavily intoxicated and that “men lined up outside her hotel room, waiting their turn to rape her” while eyewitnesses failed to intervene.

The police also arrested an employee at the Red Sea Hotel in Eilat, where the alleged rape is said to have taken place. The woman is suspected of failing to prevent a crime and obstruction of justice.

Also on Sunday, police said they will supply protection to the girl and her family after threats were made against her online. According to a police source familiar with the case, the girl’s name was made public on social media over the weekend, sparking a wave of threats against her. The special task force handling the case deemed the belligerent rhetoric to be a credible threat and police cruisers were placed outside the teen’s home.

Hagit Pe’er, head of the Naamat women’s rights organization, denounced the threats made against the girl.

“The fact that his girl has been made a prisoner in her own home instead of the dozens of men who allegedly raped her being in prison is outrageous,” she said. “I welcome the fact that the police have increased protection for her but it’s time for law enforcement to become more proactive. Those who made these online threats have to be tracked down and prosecuted to the full extent of the law.”

Over the weekend, several demonstrations were held across Israel to protest the growing violence against women and what organizers called the police’s “impotence in dealing with it.”

Organizers said thousands of Israelis took to the streets to protest “rape culture,” a term used to describe a social situation in which sexual violence is treated as the norm and victims are blamed for their own assaults.

Protesters hoisted posters reading “We will not remain silent,” “Rape is murder” and “Say no to sexual violence,” and demanded swift justice and harsher sentences for sex offenders.

“We are demonstrating to demand a sensitive and effective investigation,” the organizers said in a statement. “No more closing cases for ‘lack of public interest’ or ‘insufficient evidence.’ The justice system’s only concern should be the victims—not the reputation of perpetrators.

“The fact that 30 adults ganged up on one teenage girl and that none of them saw her as a human being—none of them understood how horrific and violent that situation was—shows how ingrained rape culture has become in our society.”

Organizers further lambasted the government over the fact that for the past three years it has failed to properly budget programs to prevent violence against women.