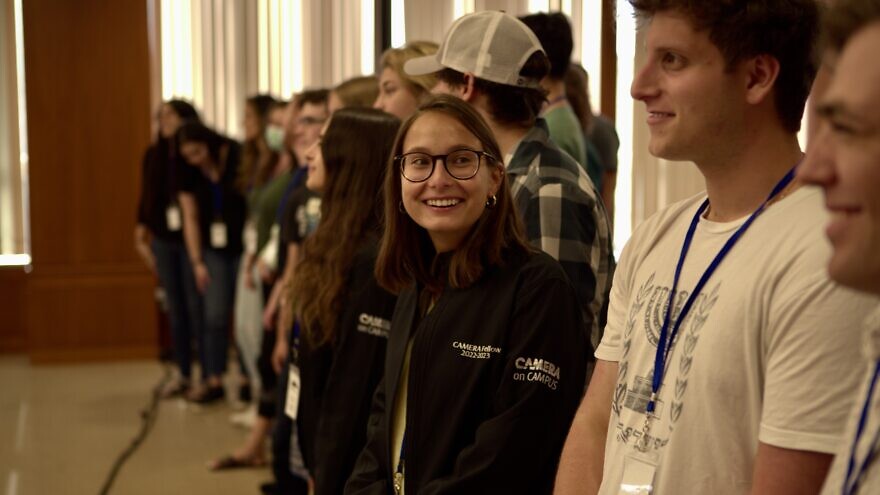 (August 26, 2022 / JNS) On a hot summer day in July, amid vacations and summer internships, a group of 40 college students traveled to the Boston University Hillel to learn how to battle against misinformation and anti-Semitism on their campuses.

Representing 26 campuses, the students attended the Committee for Accuracy in Middle East Reporting & Analysis (CAMERA)’s four-day International Student Leadership Conference. The conference drew students with diverse ideologies who all bonded over their passion for defending Israel.

Alex Grosman, a student studying international relations at Ohio State University, is no stranger to encountering anti-Israel propaganda on his campus. He says the anti-Israel students at his school are growing more active and were successful last year at passing a BDS resolution in the student government.

Grosman sees his participation in the conference as essential to helping fight back.

“I really like how CAMERA teaches us how to tackle anti-Semitism and anti-Zionism on our campuses while giving us the facts we need to know about Israel,” he told JNS. “But CAMERA also gives us real-world experience, like how to write an article. We did a simulation where we had to debate with SJP [Students for Justice in Palestine] members, and debate is something we will absolutely do in real life.”

Grosman said the conference gave him practical tools for confronting anti-Israel bias and anti-Semitism on campus. He pointed to the lecturers encouraging the trainees to speak up against injustice.

“We were taught how to be vocal,” he said. “If a professor ignores our complaints of bias, we have to bring it up to administrators and get people involved to finally put an end to the anti-Israel claims and make sure that other students don’t have to deal with it.”

Grosman said the conference gave him hope, in addition to constructive tools for this coming academic semester.

“It was enlightening because it gave us so much information that we can use in the fight for Zionism, and it’s so incredible to see that we are not alone in our struggles; students here have faced similar experiences,” he said. “It gives us hope that there are people who still support the Zionist cause.”

Speakers of the conference included JNS editor-in-chief Jonathan Tobin and Benjamin Ryberg, the COO and director of research at the Lawfare Project. 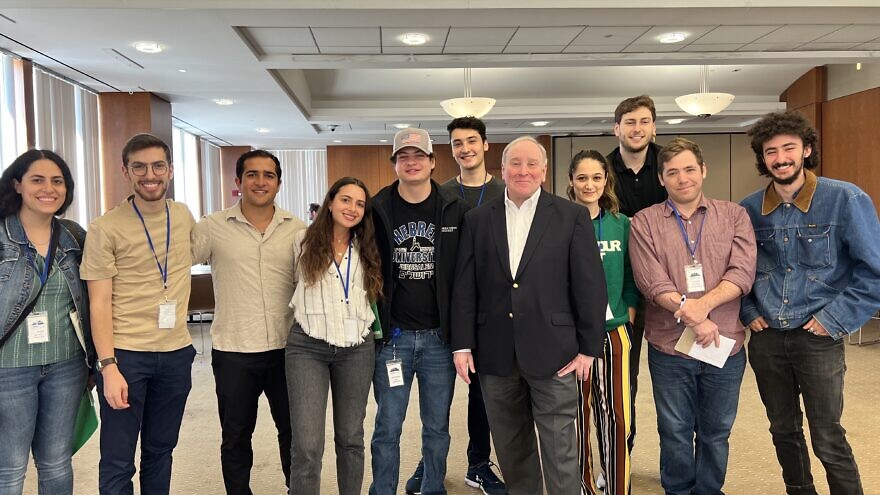 ‘It makes me feel like we are in capable hands’

Rachel Zaslavsky, 21, who studies history and government at the College of William & Mary, said the trainings are applicable for skills that students will need even after graduation.

“From social-media content and branding how to get people energized and engaged around what you are trying to organize to how to write an op-ed, this is great for me for the rest of my life,” she said.

For Zaslavsky, being around like-minded students made the experience special.

“It is so empowering and nice to be around surrounded by people who also care about this topic. I forget that there are other people who think like me, and it’s so nice to be in this environment. It makes me feel like we are in capable hands,” said Zaslavsky.

When asked why students are becoming so anti-Israel on his campus, Grosman replied that leftist American perspectives are being used to approach the Israeli-Palestinian conflict.

“A lot of it boils down to race, it’s trendy to be a lefty and democrat,” he said. “They value racial equality and believe most Jews are Ashkenazi and Palestinians are people of color. But they’re ignoring that in Israel more than 50 percent of Jewish Israels are people of color.”

While all of the students identify as Zionists, they come from varying political ideologies. However, they do recognize that they are observing the Zionist cause as being only associated with conservatives on their campuses.

Zaslavsky, who identifies herself as someone “political on the right,” said she believes this is because progressives have made taking the Palestinian side a focal point of the progressive movement.

“In more progressive spaces, moral value is assigned to certain beliefs, and many students don’t want to be seen as a bad person for supporting Israel,” she explained. “Championing the Palestinian cause makes them associated with the ‘moral good’ and helps them be more accepted with their like-minded peers and colleagues.”

“They think of us as privileged and call us ‘white-settler colonialists,’ but the truth is that we are indigenous to Israel,” she added.

One student attendee who identifies as a liberal told JNS that it is difficult to be both a Zionist and left-wing on campus.

“Left-wing Americans are desperate. Arguably, leftism is about desperation, and a lot of that is justified,” Jonah Fried, a senior at McGill University in Montreal, told JNS. “In this context, many young Jews are desperate to do something to make a difference where they think they can, and so they fall prey to anti-Zionist rhetoric.”

“It’s easy to demonize Israel, even though it’s counterproductive, but it’s a lot harder to make an actual difference for Palestinians, which in my view, requires a much more nuanced approach,” he said.

Fried, 21, added that he feels like he cannot openly voice his pro-Israel views on campus.

Managing editor for CAMERA Douglas Sandoval told JNS that the participants, who came to the training program from the United States, the United Kingdom, Israel and Canada, were selected for their “extraordinary display of leadership and defense of academic freedom and intellectual diversity,” and that during the programming “they did not disappoint.”

“All of them raised thought-provoking questions, displayed a genuine interest in discussion topics and shared ways to apply CAMERA’s principles within their contexts,” he added.