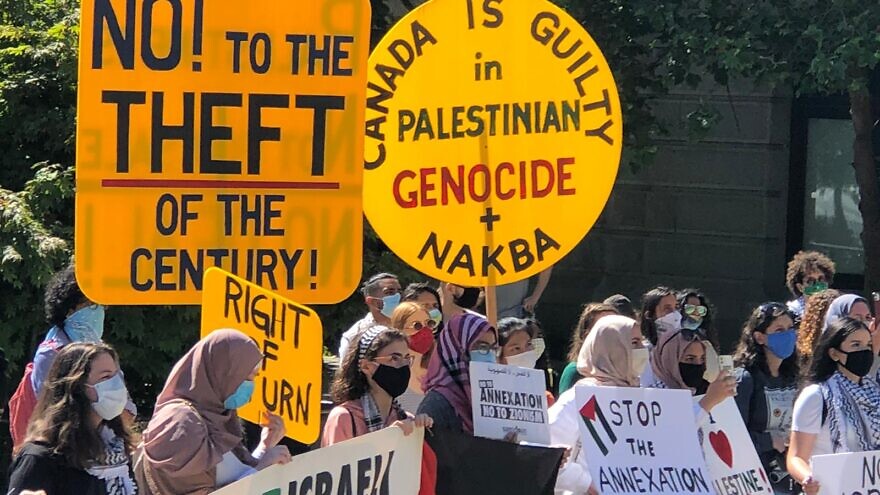 (August 7, 2020 / JNS) The Samidoun Palestinian Prisoner Solidarity Network, a BDS-promoting NGO with ties to the U.S.-designated terrorist group the Popular Front for the Liberation of Palestine (PFLP), will be leading “Days of Resistance” in major cities worldwide throughout this weekend.

The protests are slated for Aug. 7 to Aug. 9, timed to mark the 48th anniversary of the death of one of the PFLP’s senior political bureau officials, Ghassan Kanafani.

“It is inconceivable that a terrorist group like the PFLP is set to receive a warm welcome in major cities around the world under the pretense of a civil organization,” said Israeli Strategic Affairs Minister Orit Farkash-Hacohen in a statement released on Wednesday.

Leading up to the protests, the Ministry of Strategic Affairs and Public Diplomacy updated foreign officials and Israel’s Ministry of Foreign Affairs on the “Days of Resistance” and Samidoun’s ties to terrorism.

In previous instances of Samidoun protests, calls for “Death to America,” as well as remarks equating the New York Police Department, the Israel Defense Forces and the Ku Klux Klan, and were heard alongside the waving of PFLP flags.

As mentioned in the ministry’s “Terrorists in Suits” report, Samidoun is active in the international arena in calling for the release of PFLP operatives serving time in prison. Among the organization’s senior operatives in Europe, two of them have been identified by the Israeli Security Agency as having ties to the PFLP: Mustafa Awad and Muhammad Khatib.