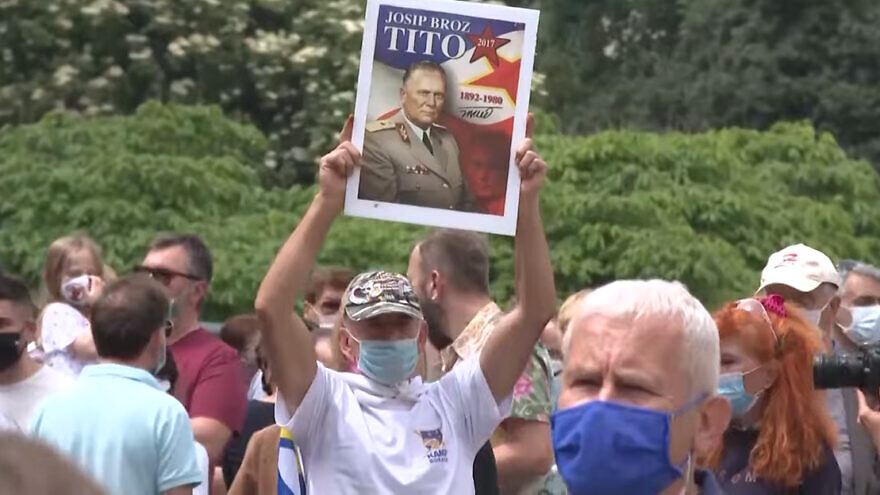 A protest in Sarajevo against a Mass honoring Croatia's Nazi collaborators during World War II, on May 16, 2020. Screenshot.
Spread the word.
Help JNS grow!
Share now:

(May 17, 2020 / JNS) Thousands of Bosnians protested on Saturday against a Mass in Sarajevo for Croatia’s Nazi-allied soldiers and civilians killed at the end of World War II.

Bosnia’s Serbian Orthodox Church, as well as the country’s Jewish and Muslim communities, condemned the Mass, according to the AP. Protesters walked through the city chanting anti-fascist songs and holding up pictures of resistance fighters tortured by Nazi-allied Croatian forces when they controlled Sarajevo during the war.

Police prevented the protesters from reaching the Sacred Heart Cathedral, where the Mass was being led by Archbishop Vinko Puljić, the highest-ranking clergyman of the Catholic Church in Bosnia.

Bosnia’s Catholic Church responded to the backlash by saying the Mass honored all innocent victims of the war, according to the report, which noted that Croatian forces supervised the Holocaust in Sarajevo, which resulted in the murder of more than 7,000 of the city’s 10,000 Jews.