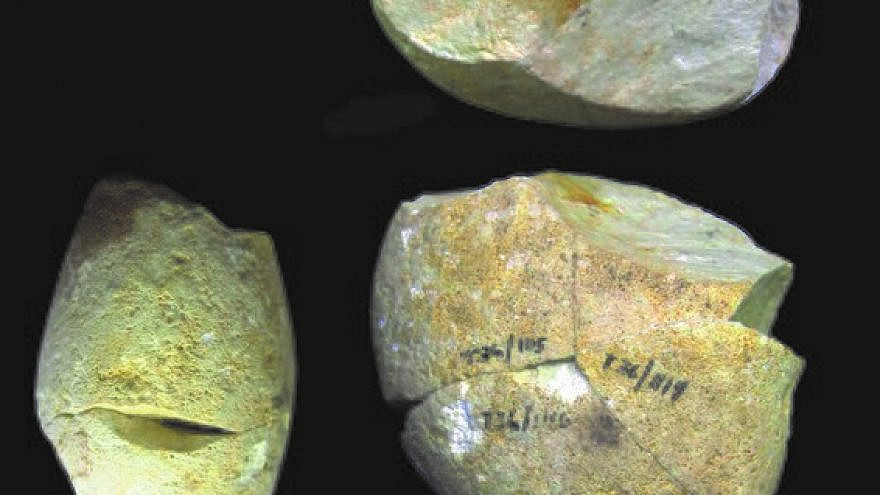 (December 29, 2020 / Israel Hayom) The oldest tool identified to date, found in northern Israel, was revealed by a group of academics at the University of Haifa to have been used by hominids before the advent of modern humans.

In an article in the Journal of Human Evolution, Dr. Ron Shimelmitz, Dr. Iris Groman Yroslavski, Professor Mina Weinstein-Evron and Professor Danny Rosenberg—all from the university’s Zinman Institute of Archaeology—described the artifact as a round dolomite stone that bears microscopic signs of grinding.

According to the authors, the rock—discovered at the Tabun Cave on Mount Carmel—was used some 350,000 years ago, before the advent of modern humans. They claimed that it dates back to some 150,000 years earlier than any other tool used for grinding found to date.

They also stated that the rare find indicates that hominids used grinding as a way of processing various materials to improve the use of environmental resources.

“At such an early stage a very significant technology was added to [the hominids’] ‘toolbox,’ ” the researchers said. “The small cobble is of immense importance because it allows us to trace the earliest origins of the abrasion action and how cognitive and motor abilities that developed during human evolution eventually evolved into important phenomena in human culture to this day.”

The Tabun Cave is part of a complex of sites that make up the UNESCO World Heritage Site on Mount Carmel. Evidence of human and pre-human activity during the last 500,000 years has been uncovered in the cave, which has contributed to the understanding of human evolution.

The rock, originally excavated in the 1960s, was identified as part of a new project that Shimelmitz and Weinstein-Evron are leading to re-examine past findings from the site.

“We concluded that the ancient stone was used for the grinding of soft materials, although we do not yet know which ones exactly,” said Groman Yroslavski.