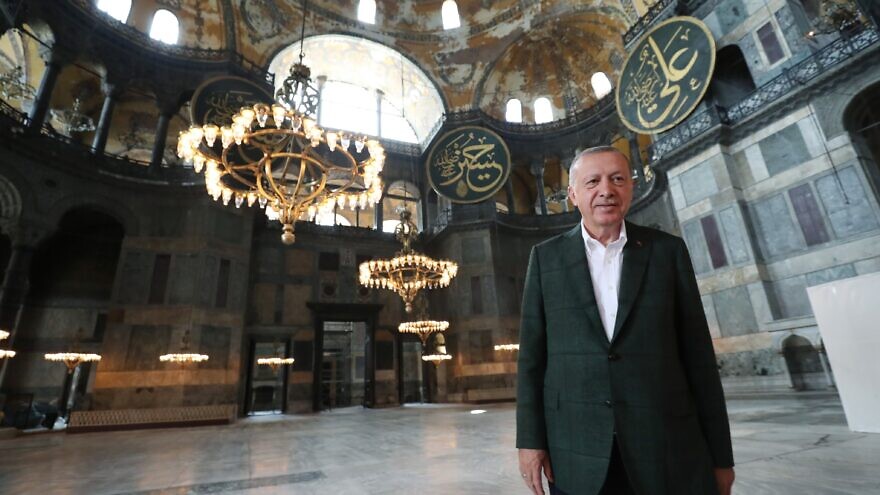 Turkish President Recep Tayyip Erdoğan joined hundreds of Muslim worshippers in Istanbul on Friday for the first prayers from the Koran in nearly 90 years inside the Hagia Sophia, once one of Christianity’s most important cathedrals, reported the AP.

Over the centuries, the cathedral had been converted into a mosque and then a museum, and now back into a mosque by the current government, despite international criticism. The president said as many as 350,000 people took part in Friday’s prayers at the site, renamed “The Grand Hagia Sophia Mosque.”

Meanwhile, church leaders in Greece and the United States announced a “day of mourning” over the new development.

Erdoğan began by reading from the Koran. The head of Turkey’s religious authority, Ali Erbas, led the ceremony and prayed that Muslims would never again be “denied” the right to worship at the monument, according to the AP.

Aykan Erdemir, senior director of the Turkey Program at the Foundation for Defense of Democracies and a former member of the Turkish parliament, told JNS last week that the Turkish president “comes from an Islamist tradition for which Hagia Sophia’s conversion has been a key goal for decades. For Erdoğan and his mentor, Necmettin Erbakan, converting Hagia Sophia was not only a symbol of reversing secular republican reforms and asserting their sectarian agenda, but also a pan-Islamist move that helps propagate their supremacist ideology across the globe.”

In neighboring Greece, bells chimed and flags flew at half-staff at hundreds of churches across the country to protest the move.

“Universal values have been tarnished, and that is why they require universal condemnation,” said Greek Prime Minister Kyriakos Mitsotakis, according to the AP.

Greek President Katerina Sakellaropoulou said it “brutally insults not only the Orthodox but all Christians, and also all of civilized humanity.”

The Greek Orthodox Archdiocese of America called the prayers “cultural and spiritual misappropriation, and a violation of all standards of religious harmony and mutual respect.”