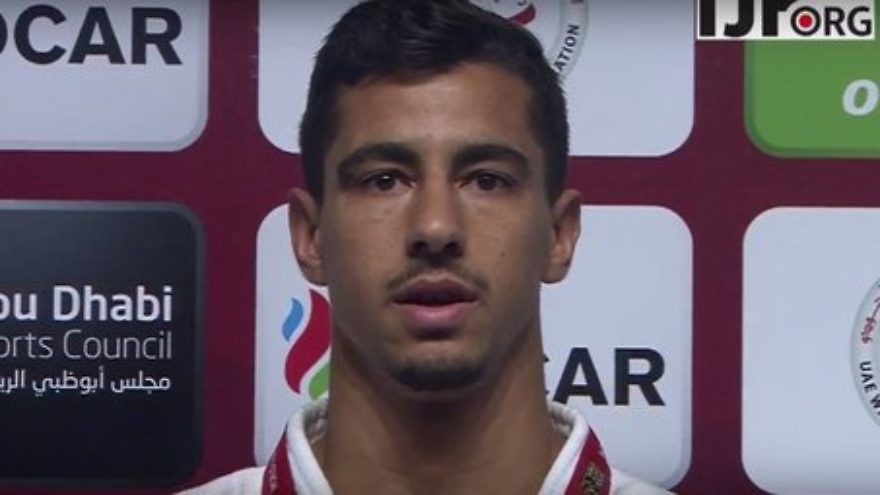 (October 29, 2017 / JNS) The United Arab Emirates (UAE) officially apologized to Israel on Saturday following a handshake snub during last week’s Abu Dhabi Grand Slam judo tournament. The Arab country did not, however, apologize for the tournament’s ban on Israeli symbols.

In what the International Judo Federation (IJF) referred to as a “historic meeting” on the tournament’s final day, Mohammad Bin Thaloub Al-Darei, president of the UAE’s Judo Federation, along with senior UAE sports official Aref Al-Awani, formally apologized to Israeli Judo Association leader Moshe Ponte “because of the UAE athletes not shaking hands” with Israel’s competitors and congratulated the Israeli team on its success.

According to the IJF, Ponte “thanked his UAE counterpart for the hospitality that was shown” to Israel’s team in Abu Dhabi.

The Arab apology followed an incident in which UAE athlete Rashad Almashjari refused to shake the hand of Israeli athlete Tohar Butbul’s after losing to him in the tournament’s first round. Butbul went on to win a bronze medal in the men’s lightweight category.

The snub mirrored an incident that occurred during the Rio Olympics in 2016, when Egyptian judoka Islam El Shehaby was booed by spectators for refusing to shake the hand of Israeli judoka Or Sasson, after losing to Sasson in the first round of the men’s over-100 kilograms competition.

Ahead of the Abu Dhabi tournament, organizers banned Israel’s team from donning national symbols and playing the Jewish state’s national anthem, “Hatikvah.” The 12 Israeli athletes competing in Abu Dhabi were also forbidden from including the letters “ISR” on their uniforms to identify their nationality.

“This is not the first time that Israeli teams playing in Gulf have been uniquely forced to give up their national symbols and anthems,” Prof. Joshua Teitelbaum, a senior research fellow at Bar-Ilan University’s Begin-Sadat Center for Strategic Studies, told JNS.org. “This apology by the UAE is too little and too late. It was an apology for not shaking hands, but not for snubbing Israel by not allowing Israeli flags and ‘Hatikvah.’”

Israeli team member Tal Flicker won a gold medal in the under-66 kilograms category last Thursday. During the medal ceremony, Flicker sang Hatikvah to himself as the IJF anthem played in the background.

“Israel is my country, and I’m proud to be Israeli,” Flicker told reporters. “The anthem that they played of the world federation was just background noise. I was singing Hatikvah from my heart.”

“I’m glad we’re here, with or without the flag. As far as we’re concerned, what’s important is having [Israeli] athletes compete on such levels and proving to everyone that there’s no stopping Israel,” said the coach of Israel’s team, Oren Smadja.

Teitelbaum said, “I’m sure Abu Dhabi pays a lot of money to the International Judo Federation, which apparently did not have a strong enough backbone to insist on sportsmanship in sports. It is up to the various international sports federations that there be no discrimination by the host nation. If a nation discriminates, it should be barred from hosting future competitions.”

The UAE “plays a double game” by publicly insulting Israeli athletes, yet maintaining “extensive business and defense relations with Israel, according to foreign sources, but all under the table,” he said.

The Arab nation’s behavior “is kind of a ‘cover’ for its well-developed relations with the Jewish state,” added Teitelbaum.

At the same time, Daniel Pipes, president of the Middle East Forum think tank, told JNS.org that he views the handshake snub and the UAE’s subsequent apology “as part of a protracted process whereby many Middle Easterners realize that the Iranian and Turkish states, plus their respective Islamist agents—not Israel—threaten their wellbeing.”

Leading up to the tournament, Israel’s Minister of Culture and Sport Miri Regev wrote a letter in mid-October to the president of the International Olympic Committee, Thomas Bach, protesting the Arab demand for the Israeli team to appear without national symbols.

“It is the obligation of any country which has the privilege of hosting an international competition to allow the competing athletes to represent the country honorably while ensuring their security,” she wrote.

During the Grand Slam competition hosted in Abu Dhabi in 2015, Israeli judo competitors accepted similar conditions to participate, wearing uniforms in the colors of the IJF rather than the Israeli flag or anything suggesting their nationality.

Asked if he expects to see Israeli national symbols allowed at next year’s judo tournament, as the IJF has indicated will be the case, Pipes said, “Unless something goes dramatically wrong in Palestinian-Israeli relations, there’s a good chance.”