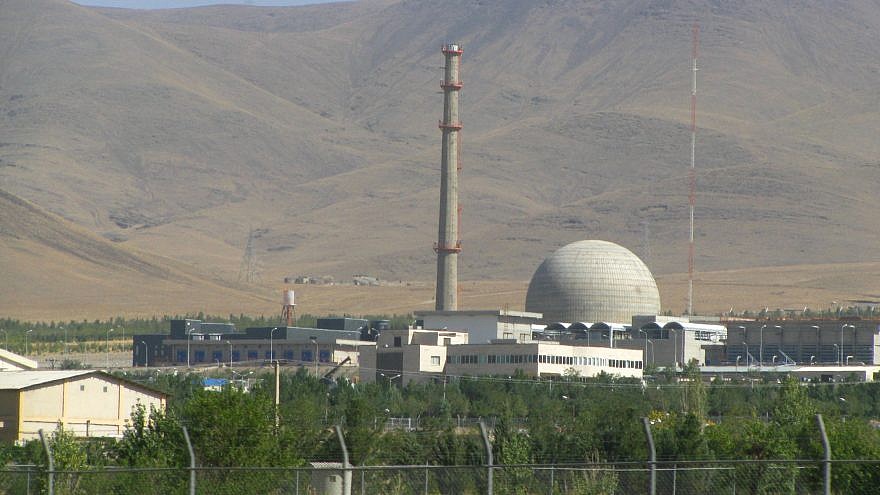 (March 29, 2020 / JNS) The Trump administration is expected to continue allowing Russian, Chinese and European companies to keep operating at Iranian nuclear facilities, despite U.S. sanctions on Iran over its nuclear program, two sources familiar with the decision told JNS on Friday.

The United States has continuously extended the civilian nuclear waivers under the 2015 Joint Comprehensive Plan of Action (JCPOA), commonly known as the Iran nuclear deal, since withdrawing from it in May 2018. The government has reimposed sanctions lifted under it, along with enacting new financial penalties against the regime as part of what the administration has called a “maximum pressure” campaign.

The deadline to extend the waivers, which has lasted 60 days, is Monday. They affect the Arak and Bushehr facilities, and the Tehran Research Reactor, where the fuel is provided by Russia, which also removes the facility’s spent fuel after it’s used in the reactor. The last extension was granted in January and also came with the United States sanctioning the Atomic Energy Organization of Iran and its chief, Ali Akbar Salehi.

The nuclear agreement between Iran and world powers has allowed Tehran to continue its nuclear program within certain limits in exchange for lifting of economic sanctions.

The length of the upcoming waivers is yet to be determined.

While no decision has officially been made, an internal Trump administration battle between U.S. Treasury Secretary Steven Mnuchin and U.S. Secretary of State Mike Pompeo has apparently been brewing over whether to renew the waivers, with the former in favor and the latter against, according to three sources familiar with the situation.

Although tension between Mnuchin and Pompeo on Iran policy is nothing new, this is the first time that Mnuchin has departed from the argument that the United States should seek to fix and not withdraw from the Iran nuclear deal and now “has taken the John Kerry position that we need to work with the Iranians,” said a U.S. official familiar with the inner-agency process, referring to the secretary of state under President Barack Obama, who agreed to the Iran nuclear accord.

In other words, “it’s the first time that he’s given up President Trump’s agenda and instead gone the John Kerry route of we just have to allow these waivers for the Iranians,” said the official.

The U.S. State and Treasury Departments did not respond to a request for comment.

Republicans on Capitol Hill, including Sens. Lindsey Graham (R-S.C.), Ted Cruz (R-Texas) and Rep. Liz Cheney (R-Wyo.), have previously objected to waivers being extended and are likely do so were there to be another extension.

“Some want the waivers ended because Iran should not have fissile-material production capabilities supported in any way by international assistance, but it is unclear how we get to the closure of those facilities in the absence of a replacement deal,” Andrea Stricker, a research fellow at the Foundation for Defense of Democracies, previously told JNS.

Robert Einhorn, who served as the U.S. Department of State special adviser for nonproliferation and arms control in the Obama administration, previously told JNS, “revoking remaining waivers would not mark the complete withdrawal of the U.S. from the JCPOA. The U.S. has already completely withdrawn. It no longer considers itself bound by any of its commitments.

“Sanctions against dealing with Iran’s nuclear organizations are U.S. sanctions. In the absence of sanctions waivers, foreign entities (e.g., Chinese, Russian, British) cooperating with Iran’s nuclear organizations on JCPOA-mandated projects (e.g., converting the Arak heavy water reactor) would be subject to sanctions,” he continued. “So revoking remaining waivers could put an end to those projects, which serve important nonproliferation goals, and drive another nail into the JCPOA’s coffin.”