(March 1, 2022 / JNS) Jerusalem could one day have a mayor with allegiance to Hamas, warns the president of an Israeli organization that advocates for a united and secure Jerusalem under Israeli sovereignty.

Chaim Silberstein, president of Keep Jerusalem, told JNS that research by his group indicates that by 2030 the Arab population is projected to be 50 percent of the total population of Jerusalem.

That poses a major threat to a Jewish Jerusalem, Silberstein emphasizes. “Theoretically, those Arabs, who have voting rights in municipal elections, could change their current policy of abstaining from voting to avoid legitimating Israeli rule, and vote in a Hamas-supporting Arab mayor….They could take over important planning committees, control billions of shekels in city budgets and impact Jerusalem in a very frightening way, and all through democratic processes.”

Silberstein is just one of the activists who maintain that the absence of a comprehensive strategic plan for the future of Jerusalem, and Israeli leaders’ lack of awareness about the demographic picture, present a danger to the city’s future.

Data indicates that over the past few decades the Arab population in Jerusalem is growing faster than the Jewish population. According to statistics presented in Jerusalem Facts and Trends 2021, published by the Jerusalem Institute for Policy Research, Jews constituted 74  percent of the population in 1967, compared to 62 percent in 2019. During the same period, the percentage of Arabs increased from 26 percent to 38 percent in 2019. From 2015-2018, the annual growth rate of the Arab population averaged 2.5-2.7 percent compared to 1.5-1.8 percent for the Jewish population.

Much of the attrition of the Jewish population can be attributed to the lack of overall planning, Silberstein asserts. He points to the issue of building starts that he says has been ignored for many years.

“The average number of building starts in Jerusalem over the last 15 years was about 1,200 per year. Demand is for at least 4000 per year, so there’s a huge gap, and this pushes up prices. Average people can’t afford to live here, so there’s an exodus from the city.”

Over the past 20 years, some 400,000 Jews have left Jerusalem and about 250,000 have moved in. “That net loss of 150,000 Jews has barely been addressed,” Silberstein states. “How come no one looked at that 10-15 years ago and said, ‘We need to reverse that.’ The Israeli government does not have a clear policy about the future of Jerusalem. There’s no master plan in general and they are not dealing with the fundamental challenges facing Jerusalem today.” 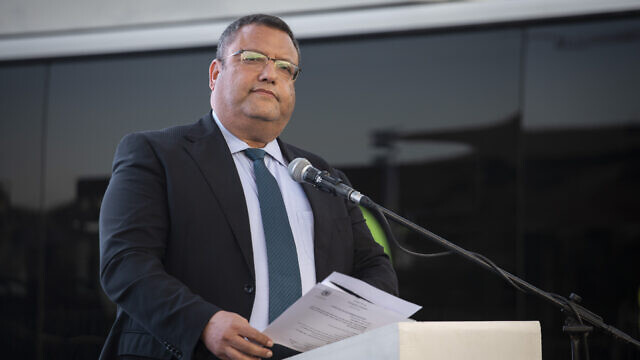 Jerusalem Deputy Mayor Aryeh King also decries the lack of a strategic master plan for the city. King, a veteran activist advocating for Jewish presence in all parts of Jerusalem, told JNS he believes that “this is how tens of thousands of housing units for Arabs in south Jerusalem and north Jerusalem are being promoted without considering how many permits are issued to Jews, and thus the demographics in the city are undermined.”

In recent years various plans for specific neighborhoods have been adopted, but there’s still no overall master plan. In May 2018, the Israeli government voted in Resolution 3790, a five-year plan that allocated 2.5 billion NIS ($780 million) for education, economic development and infrastructure in eastern Jerusalem to improve the lives of Arab residents.

“It is precisely because I don’t see Jerusalem being divided in the future that we must invest. It’s our duty to invest in the city’s eastern part, otherwise Jerusalem will not be able to function as a city,” Elkin told Ha’aretz.

Yair Assaf-Shapira, senior researcher and head of data analysis and services at the Jerusalem Institute for Policy Research (JIPR) told JNS that a major problem in eastern Jerusalem is the fact that for much of the area there is no official registration of properties. As a result, there is no regulation of Arab building.

Assaf-Shapira points out that a goal for Plan 3790 was for property in eastern Jerusalem to be registered in the national land registry but that has not occurred.

The last master plan for Jerusalem was prepared in 2000, made public in 2004 and ratified in 2007 by the Planning and Construction Committee of the Jerusalem Municipality. Modifications were made by a steering committee in 2009 but the plan was never approved.

ָAn official from the Jerusalem Municipality told JNS the Jerusalem 2000 Plan was scuttled by former Minister of the Interior Eli Yishai (Shas), who saw its goals of improving conditions in the Arab neighborhoods of eastern Jerusalem as contrary to the decisions of the government and its demographic policy.

Silberstein suggests that “it’s a hot potato no one wants to touch, but we need a strategic plan to look at the whole picture and understand the threats and challenges facing the city.”

JIPR’s Assaf-Shapira concurs. “The absence of an up-to-date comprehensive and approved masterplan creates setbacks and impediments for development,” he says.

No recent Israeli government — whether headed by Ehud Olmert (who was mayor of Jerusalem), Benjamin Netanyahu or Ariel Sharon — looked at Jerusalem in a strategic way, notes Silberstein.

Former Jerusalem Mayor Nir Barkat found himself in an era when President Barack Obama and Secretary of State Hilary Clinton demanded that Netanyahu halt all building in eastern Jerusalem, including in the large Jewish neighborhoods of Gilo, Pisgat Zeev and Ramat Shlomo. “Bibi refused but complied, so there was a period of about eight years when no building went on, but Arabs moved into Jerusalem and continued to build illegally with a lack of enforcement by the city,” Silberstein relates.

Deputy Mayor King asserted to JNS that from 2009-2019 the municipality “cooperated with government plans to transfer Jerusalem neighborhoods to P.A. (Palestinian Authority) officials.”

Under current Jerusalem Mayor Moshe Leon, the situation has begun to improve in significant ways and building programs are being approved, notes Silberstein. At a recent conference, Leon announced that there would be 6,000 building starts in the city.

Assaf-Shapira lauds what he sees as the mayor’s vision for better quality of life for all Jerusalem’s population groups. “I believe he’s right to unite them around this, rather than a political idea. The problem is that large-scale urban planning is sometimes highly political and so it gets pushed down on the agenda and that leads to problems in the long run.”

In the absence of any comprehensive official plans, Keep Jerusalem has launched a project together with the Shilo Forum to research and make policy recommendations regarding the lack of Israeli sovereignty in eastern Jerusalem.

The research team has uncovered the presence in Jerusalem of organizations including Fatah, the Muslim Brotherhood, Hamas, Tahrir and hundreds of NGOs whose sole goal is to undermine Israeli sovereignty in Jerusalem.

“It’s a threat that’s not being addressed at any serious level of government,” says Silberstein.  “The lack of awareness of these ongoing problems permeates to the highest levels so we are trying to research and make policy recommendations so that the government can wake up and do something about it.”

On the lack of sovereignty issue, Silberstein cites two major concerns. The first is illegal Arab building in Jerusalem that has reached 30,000 units, or about 1,200 units per year, with Israeli enforcement below 1 percent.

Secondly, the P.A. has produced a Jerusalem 2030 Plan that focuses on how to establish a Palestinian state within what they call the Jerusalem district, which is all of eastern Jerusalem and much of Area C that surrounds Jerusalem. Although previous P.A. plans have not come to fruition, it should be taken seriously because they have been promised funding by the E.U. and U.N. Habitat to the tune of $1 billion. 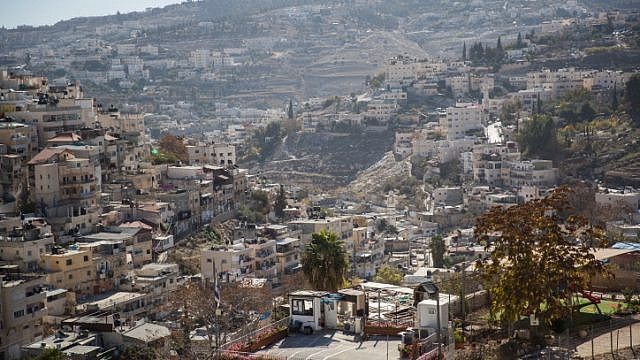 View of the eastern Jerusalem neighborhood of Silwan on Dec. 3, 2017. Photo by Yonatan Sindel/Flash90.

For Keep Jerusalem, a largely privately funded non-profit organization that was founded in 2003 with a staff of seven and an office in Jerusalem, combating those threats means establishing three kinds of facts on the ground: physical, political, and educational.

Land reclamation in strategic and symbolic areas is the physical part. Silberstein acknowledges that redeeming important Jewish properties will not solve the demographic challenges facing Jerusalem. “Only the government can solve that challenge,” he says, but promoting research that physical facts such as housing, infrastructure, tourism and commerce all need to be significantly increased, and presenting them to decision makers is a priority.

In the political and educational spheres, Silberstein says the motto is “impacting public opinion and influencing public policy. Unfortunately, the Israeli government does not share the three-prong approach and just puts out the fires as they arise.  Our goal is to try to influence them to adopt a more strategic approach to Jerusalem.”

For Keep Jerusalem, a central piece of that strategy is the concept of expanding the borders to include the satellite towns surrounding the capital, including Givat Zev, Maale Adumim, Gush Etzion and Mevasseret Tzion.

“The idea of an umbrella municipality will take years to implement but we believe it’s critical for the dominance of a Jewish Jerusalem. We’re working hard to convince the decision makers of the importance of this — it’s an educational process,” Silberstein notes. Many cities around the world such as Montreal, New York, Paris, London and Miami have umbrella municipalities. So far, politicians including now-MK Barkat (Likud) and Ofer Berkovitch (Jerusalem City Council opposition leader) have voiced support for the idea.

King, who also heads the Israel Land Foundation, told JNS he too supports the establishment of what he calls the “Greater Jerusalem” council but emphasized that to date there is no such municipal decision.

Assaf-Shapira explained to JNS that he supports the umbrella municipality idea in principle but with one major reservation, noting, “Jerusalem should strive to strengthen its metropolitan status, but I think it’s not realistic to include the Palestinian outskirts in such an arrangement.”

Another Jerusalem deputy mayor, Fleur Hassan-Nahoum, told JNS, “I’m in favor of redrawing the municipal boundaries to the separation barrier as a way to reflect realities on the ground.”

Meanwhile, Silberstein and his team continue to take Knesset members from the Blue and White, Likud and Yamina parties around eastern Jerusalem to explain their view of the demographic, urban threats — and to present solutions.

“Our goal is to change the demographic ratio from the current 60 (Arab)/40(Jewish) to 85(Jewish)/15(Arab) in legal and democratic ways by implementing smart government policy.  That’s the long-term plan,” Silberstein concludes.