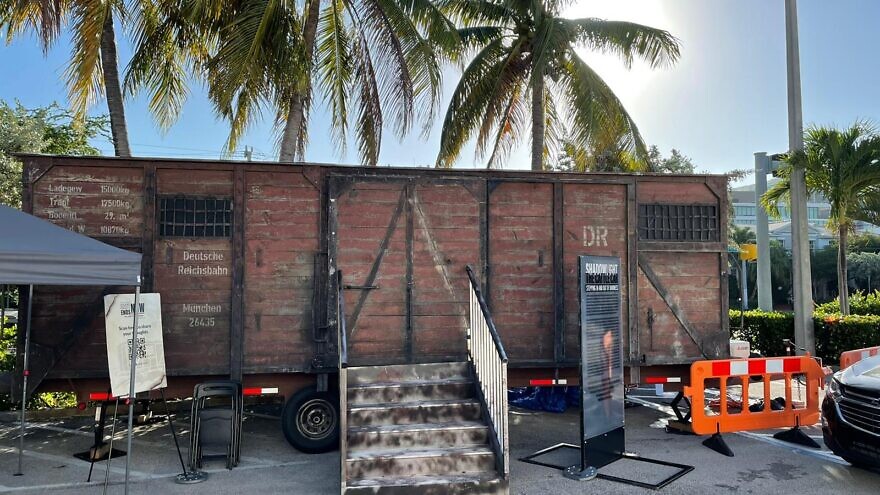 The exterior of Hate Ends Now’s The Cattle Car: Stepping In and Out of Darkness. Credit: NCSY.
Spread the word.
Help JNS grow!
Share now:

(September 6, 2022, Oakhurst, N.J., JNS Wire) From September 7-9, Hate Ends Now’s The Cattle Car: Stepping In and Out of Darkness – a traveling exhibit created by the Orthodox Union’s Southern NCSY and Jewish Student Union that teaches about antisemitism – will be in Oakhurst, N.J. for the next stop on its tour.

The exhibit will be open to the public at Congregation Torat El, 301 Monmouth Rd. After September 9, it will be displayed at a local public school; for the school’s location and visiting information, contact info@hatenedsnow.org.

The goal of the Hate Ends Now exhibit is to counter the notion that the Holocaust was not a real event in history, and to challenge visitors to internalize the universal lessons of the Holocaust and take a stand against hatred. The traveling display was created in conjunction with ShadowLight, a national Holocaust nonprofit.

The exhibit features a replica of a World War II, Holocaust-era cattle car used to transport Jews and other targeted groups to concentration camps. Inside, an immersive, 360-degree experience displays a moving collection of imagery and footage dating from 1933-1945. The recorded documentaries of Holocaust survivors describing their inhumane experiences in the cattle car provide visitors firsthand accounts of the atrocities that took place during that time.

“With hate and intolerance on the rise, the Hate Ends Now initiative meets an important global need in a creative and impactful educational way,” said Rabbi Micah Greenland, NCSY’s international director. “I am so proud that our innovative NCSY educators have been able to bring this program to the world, beginning in Florida and now in New Jersey.”

The exhibit is intended for participants to deepen their understanding of the development and aftermath of the Holocaust, and encourages them to reflect on modern-day instances of discrimination and intolerance.

“Unfortunately, it seems that hate crimes and other bigoted acts are on the rise once more,” said Southern NCSY Executive Director Todd Cohn. “Through delving into the history of the atrocities committed in service of hate, our hope is to inspire future generations on the merits of tolerance.”

“We are excited to have the cattle car exhibit in New Jersey,” said NJ NCSY Regional Director Aryeh Wielgus. “I am thrilled that people of all ages, especially the younger generation, will benefit from this important educational program. We are grateful to all who are making this possible.”

The tour stop in Oakhurst, N.J. is sponsored by B’nai Sholom/Beth El Foundation.

Hate Ends Now made its debut at Palm Beach Central High School in Wellington, Fl. on December 1, 2021, and will continue moving across the United States until June 2023. It has been displayed in cities across Florida, South Carolina, North Carolina and Georgia, including at 18 high schools, seven universities, and 13 other locations such as synagogues, churches, and the Miami Heat FTX arena. To date, it has had 30,400 visitors.

For more information, including the tour schedule and to host the exhibit, visit www.hateendsnow.org.

ShadowLight is a Holocaust education nonprofit based in Toronto, Ontario. Originating by students for students, the organization was conceived with the goal of providing an interactive and educational experience for people of all ages so that they can empathize with the stories of suffering during the Holocaust, be able to connect history to current prejudices and be infused with inspiration and a sense of responsibility to create a better tomorrow.

Orthodox Union
Founded in 1898, the Orthodox Union, (OU), or Union of Orthodox Jewish Congregations of America, serves as the voice of American Orthodox Jewry, with over 400 congregations in its synagogue network. As the umbrella organization for American Orthodox Jewry, the OU is at the forefront of advocacy work on both state and federal levels, outreach to Jewish teens and young professionals through NCSY, Israel Free Spirit Birthright, Yachad and OU Press, among many other divisions and programs.

NCSY
NCSY is a world-recognized organization that has played a pivotal role in the lives of Jewish teens across the globe. With the vision of Harold and Enid Boxer, the Orthodox Union founded NCSY in 1954 to provide Jewish teens with an opportunity to build a strong connection to their Jewish roots through inspiration and leadership skills. NCSY connects with Jewish teens through innovative, cutting-edge social and recreational programs to develop a positive Jewish identity.
Publish your organization's press release on JNS Wire
Releases published on the JNS Wire are communicated and paid for by third parties. Jewish News Syndicate, and any of its distribution partners, take zero responsibility for the accuracy of any content published in any press release. All the statements, opinions, figures in text or multimedia including photos or videos included in each release are presented solely by the sponsoring organization, and in no way reflect the views or recommendation of Jewish News Syndicate or any of its partners. If you believe any of the content in a release published on JNS Wire is offensive or abusive, please report a release.
Never miss a thing
Get the best stories faster with JNS breaking news updates