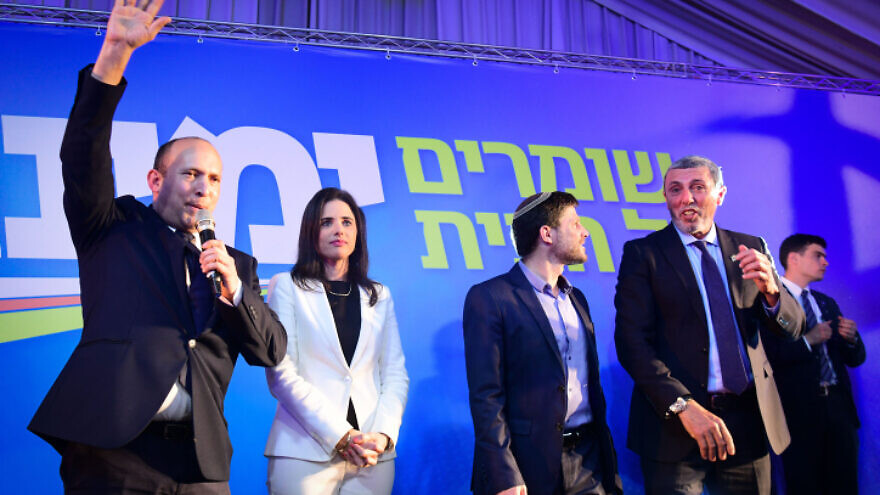 (March 30, 2020 / Ariel Kahana and Yehuda Shlezinger) As Israel’s Likud and Blue and White parties continue their efforts to cobble together a national unity government, many in the right-wing bloc expressed concerns about the large number of portfolios Blue and White leader Benny Gantz is expected to secure for his faction.

At this stage of the negotiations, both blocs have laid claim to 15 portfolios, a serious step down from the right-wing bloc’s current 28 portfolios.

The potential division of ministries affects mostly Yamina, the alliance of Jewish Home, the National Union and the New Right. The faction, which currently holds three ministries—  defense for Naftali Bennett, transportation for Bezalel Smotrich and education for Rafi Peretz—criticized Israeli Prime Minister Benjamin Netanyahu “for not even considering Yamina for a major portfolio.”

Netanyahu “sold everything that is important to the ideological right to Blue and White, and the Justice Ministry will probably go to [MK Avi] Nissenkorn, which is a disaster for the right given that he is very left-wing,” one Yamina official told Israel Hayom.

“He sold the defense, economy and communications portfolio to the left,” he continued. “Netanyahu is basically forming a left-wing government. He made sure the haredim get what they want, but he didn’t even think about giving the interior, health or religious-affairs portfolios to Blue and White.”

According to the current understanding between Gantz and Netanyahu, both Interior Minister Aryeh Deri (Shas) and Health Minister Yaakov Litzman (United Torah Judaism) will remain in office.

Another Yamina official said the faction was so disturbed by the emerging shape of the next government that it might join the opposition.

“If Netanyahu leaves us with nothing and forms  a left-wing government, not only will we not be part of it, we will try to topple him from the outside. We won’t be a leftist government’s fig leaf,” he asserted.

Smotrich wrote on social media that “a unity government is important, but I lack last week’s champions of democracy to explain why it is democratic to give 17 MKs political power equal to a bloc of 58 MKs. In the next government, the minority is going to rule and run the country. There may be no other choice but we want to put it on the table and keep it in mind the next time they [the left] talk about the ‘blackmail’ of the small parties.”

Former Justice Minister Ayelet Shaked said that “handing over of the defense and justice ministries to the left means ideological subjugation to the left and the destruction of the reform instated in the Justice Ministry, as well as of the regularization effort [of settlements] in Judea and Samaria effort we have led in the courts in recent years.”

Speaking with Army Radio on Monday, Shaked stressed that going into the opposition was definitely on the table.

“We weren’t born ministers and this partnership [with Likud] won’t be as natural if we’re facing a left-wing government. Sitting in the opposition is definitely an option. It’s unthinkable that for 17 mandates, everything important to the right will be sold to the left,” she said, adding, “I’d like to believe that the prime minister won’t dismantle the right-wing bloc.”

Likud officials said in response that “Prime Minister Benjamin Netanyahu spoke on the phone with the heads of the national camp and made it clear to them that the preservation of the national camp is more important than ever during efforts to establish a unity government. The prime minister made it clear to the faction leaders that the media reports about the negotiations, including the division of portfolios, are false.”