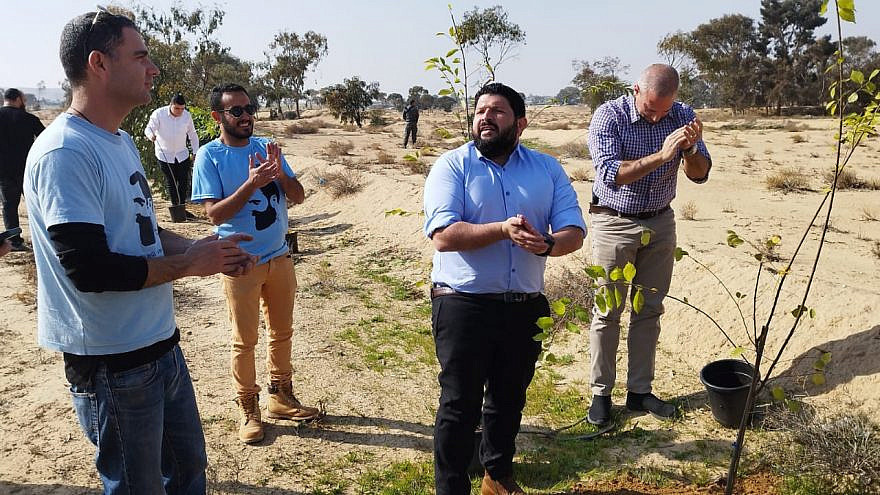 (January 24, 2023 / JNS) A tree-planting event at the Yatir Forest in the Negev led by Zionist NGO Im Tirtzu on Sunday appears to have spurred to action the much larger Keren Kayemeth LeIsrael-Jewish National Fund (JNF-KKL), which on the same day announced plans to afforest the region.

JNF-KKL, which says it has planted more than 240 million trees in Israel since 1901, was reportedly deterred from granting permission to plant trees at Yatir following violent protests in January 2022, when more than 2,000 people demonstrated against a JNF-KKL tree-planting event there. Bedouin rioters threw stones at police and blocked a road. Twelve protesters were injured in the melee.

This month, the Israel Lands Authority sent JNF-KKL a letter demanding to know why it hadn’t granted permission for further plantings at Yatir, Israel Hayom reported on Jan. 19. The Lands Authority noted in the letter that afforestation in the area was critical given illegal Bedouin construction and the need to prevent further such building near a section that would become part of Highway 6.

Former Minister of Communications Yoaz Hendel was cited in the report saying that the reason for JNF-KKL’s delay was its fear that tree-planting would spark further Bedouin disturbances.

Despite threats from Arab parties Ra’am and Hadash-Ta’al, Im Tirtzu decided to go ahead with tree-planting in a symbolic move to show that Israel wouldn’t be deterred by threats, the group’s spokesman told JNS.

Joining the NGO were Knesset members Almog Cohen of the Otzma Yehudit Party and Hanoch Milwidsky of Likud.

“Our hands are dirty in the holy mud of the land of our ancestors. The privilege is great and the action is exciting. If JNF does not allow the planting of the trees, we will come here every time with more and more people to do their work,” Cohen said.

Noting the fact that there were no major disturbances on Sunday, Matan Peleg, CEO of Im Tirtzu, said, “They said that they will fight against us, but they are not here. Because when you are not afraid and you come with confidence then everything is OK.

“The blossoming of the wilderness in the Negev has always been a cornerstone of the Zionist enterprise, and as Ben-Gurion said—in the Negev the people of Israel will be tested. The Bedouin are not our enemies, our enemy is our fear of ourselves,” Peleg added.

Im Tirtzu’s planting began at 9 a.m. on Sunday. At 11 a.m., JNF-KKL issued a press release announcing that “JNF-KKL’s management has decided to start the planting at the Nahal Yatir area. This is the first decision under the leadership of the new chairwoman, who entered her role at the beginning of the month.

“The planting will include agricultural works at the Nahal Yatir area on state lands that serve as protection from invasions, environmental harm, illegal construction and trespassing—all common occurrences in the area,” the press release said.