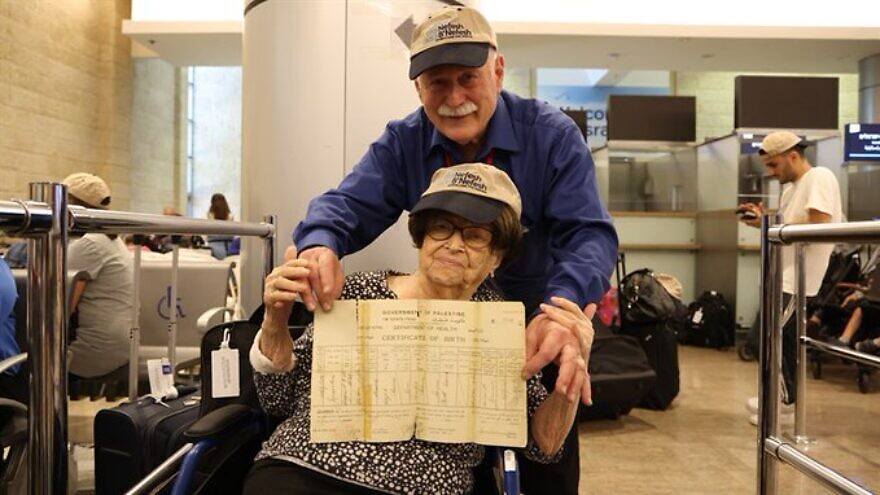 (September 21, 2022 / JNS) A 101-year-old woman who made aliyah from New Jersey last week is the oldest immigrant to move to the Jewish state from the U.S. in the last five years.

Stella Rockoff was born in Jerusalem in 1921, during the British Mandate of Palestine. Her family immigrated to Brooklyn, New York, when she was five and she moved to Pennsylvania after she married Rabbi Herman Rockoff in 1940. She later lived again in New York with her husband and four children, where she worked as executive secretary of the Rabbinical Council of America.

She lived in Clifton, New Jersey, before moving back to Israel last week with a daughter and son-in-law as part of a group of nearly 60 olim from North America. The group arrived at Ben-Gurion Airport on an El Al flight organized by Nefesh B’Nefesh in coordination with the Ministry of Aliyah and Integration, the Jewish Agency for Israel, Keren Kayemeth LeIsrael and JNF-USA.

“All my life I dreamed of returning to my native country,” said Rockoff. “This is a day of celebration for me. My family left at a time when ‘the Jewish State’ was just an idea, an idea that has since become the State of Israel, now a strong nation and a leader in innovation, and I am proud to finally call it home. I can’t wait to be reunited with my many grandchildren, 22 great-grandchildren, and two more great-great-grandchildren in my old-new home.”

Elaine and Michael Reinheimer, Rockoff’s daughter and son-in-law who made aliyah with her, said, “The idea that she will be reunited with the family in Israel makes mom very happy. The grandchildren and great-grandchildren can’t wait for her to arrive. America has been very good to us, but now it’s time to go home.”

Rabbi Yehoshua Fass, co-founder and executive director of Nefesh B’Nefesh, said Rockoff’s move to Israel proves “that it is never too late to return home.”