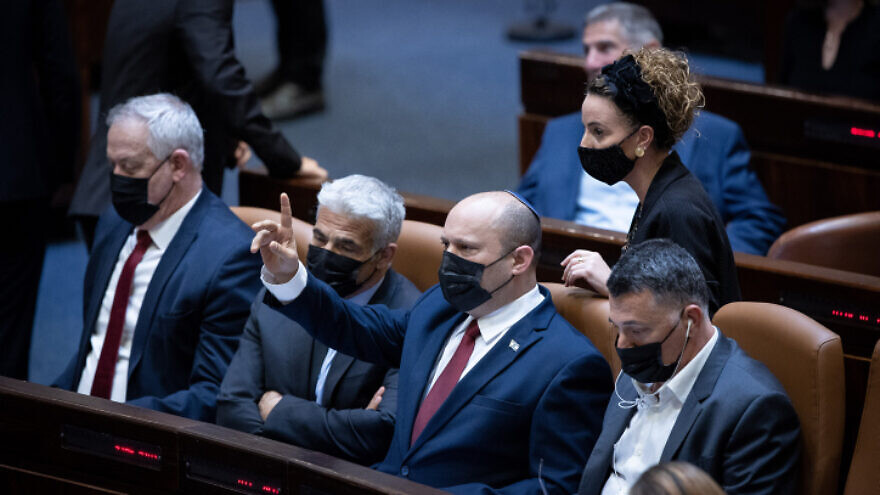 (L-R) Israeli minister of Defense Benny Gantz, minister of Foreign Affairs Yair Lapid, Prime Minister Naftali Bennett and Minister of Justice Gideon Saar during a discussion on the "family reunification law", during a plenum session in the assembly hall of the Israeli parliament, in Jerusalem, on July 6, 2021. Photo by Yonatan Sindel/Flash90
Republish this article
1731 WORDS
Spread the word.
Help JNS grow!
Share now:

(July 6, 2021 / JNS) Politics makes strange bedfellows. In the predawn hours of Tuesday morning, the Likud Party celebrated alongside the anti-Zionist Joint Arab List, as the Citizenship and Entry Into Israel Law, meant to bolster Israel’s security by checking large-scale, unfiltered Palestinian immigration, went down as a result of a narrow defeat in a tied vote, 59-59.

The law, supported by the Likud for the last 12 years when it controlled the levers of power, has been renewed annually without difficulty since it was first passed in 2003.

The law essentially prevents Palestinians living in Judea, Samaria and the Gaza Strip from “marrying into Israel”—meaning, gaining citizenship through wedlock to an Arab-Israeli. Since 1963, an estimated quarter-million Palestinians have become Israeli citizens in this way.

The Likud voted against the law to embarrass the new government. The Joint List voted against it because it considered the law discriminatory.

Minister of Interior Ayelet Shaked underscored the strange political constellation in a tweet after the vote: “Whoever didn’t see the jubilation of Likud and Religious Zionism members with Ofer Kasif and Sami Abu Shehadeh [of the Joint List] never saw such lunacy in all their days.”

Shaked’s rhetoric couldn’t conceal the fact that the vote is a defeat for the new government in its first test since taking power a little more than three weeks ago. The tied vote followed an all-night debate with parliamentarians from both sides delivering mutually recriminatory speeches from the Knesset podium.

Former Prime Minister Benjamin Netanyahu was one of the first to speak, sticking to the opposition script that a government relying on the Islamist Ra’am and far-left Meretz parties couldn’t uphold Israel’s security. “A law full of holes, which has been nibbled away at every year—even this they’re not able to pass because they’re in fact dependent … on anti-Zionist elements that oppose Israel as a Jewish and democratic state.”

Changes the law underwent over the course of the night appeared to lend credence to his charges. In an effort to rally support within the coalition itself—some of whose members opposed the law on ideological grounds—Shaked presented a compromise at 2:30 a.m. which extended the law for six months instead of a year, and doubled over the previous year the number of cases of Palestinians living in Israel who were not citizens whose status the government would advance. While this brought members of Ra’am and the Meretz Party on board (though in the runup to the vote, Meretz said it would vote against the law on the ground it “discriminates against a population on the basis of race, was born in sin, and shouldn’t be put to a vote in the Knesset”), it was not enough to save the law.

Amichai Chikli, a member of the Yamina Party who broke from the coalition to vote against the law, explained that it was this compromise that led to his decision. “Tonight, we received proof of the problematic nature of a government that does not have a clear Zionist majority. One that starts the night with a one-year extension of the law and finishes it with a six-month extension, which starts with 1,500 permits and finishes with over 3,000. Israel needs a functioning Zionist government, not a mix that depends on blocking the votes of Ra’am and Meretz.”

After the compromise failed, Shaked tweeted that the expiration of the law would lead to 15,000 Palestinian citizenship applications.

Opposing the law was a risky move for Netanyahu, who faced internal opposition given the law’s security implications. Israel Hayom reported that Likud Knesset member Avi Dichter—a former head of Shabak, Israel’s internal security service—met with members of the opposition last week to explain to them that the law’s importance outweighed politics. Dichter ended up falling in line and voting against the law on Tuesday.

Netanyahu clearly decided that the political value of fighting the law outweighed the possible security fallout. The online news site Davar reports that he told a Likud faction meeting Monday: “With all the importance of this law, the importance of overthrowing the government is greater. … This is not just a law. It is a law that exposes the fault line of this government, which aims to advance anti-Zionist agendas.”

‘Right of return’ through the back door

Nadav Shragai, a researcher for the Jerusalem Center for Public Affairs, tells JNS that he thinks the opposition made a mistake opposing the law. “They wanted to embarrass the new government, but they embarrassed mainly themselves. For years, they pushed this law, and suddenly, they opposed it only because they’re in the opposition now.”

The government’s justification for the law relies heavily on security. The law passed shortly after the Second Intifada, which erupted in September 2000 and was marked by suicide bombings throughout the country that took the lives of more than a thousand Israelis. According to a 2020 document prepared by Israel’s Foreign Affairs and Defense Committee’s legal team, “in dozens of suicide bombings which took place in those days, there was a growing involvement of Palestinians who were originally residents of Judea and Samaria and Gaza, who carried, following family unification proceedings, Israeli identity cards that allowed them free movement between P.A. territories and Israel.”

Shragai, writing in Israel Hayom, reported that Israel’s defense establishment found that between 2001 and 2016, the second generation of so-called unified families, while only 5 percent of Arab Israelis, made up 15 percent of those involved in terrorism. The number was far greater in Jerusalem where unified families’ involvement in terrorism was 12 times that of the general Arab-Israeli population.

Referring to the terror statistics, Shaked said on Monday that “it’s true through today. If you look at the last years, the last terror wave, from 2015 and on, from within the Israeli-Arab [sector], the majority of the people who take part in terror activities came here through family unity or were their descendants.”

“I can’t overstate the significance of this law,” Peter tells JNS. “Hundreds of thousands of people coming from a territory which declares its national goal is to terminate Israel as a Jewish state is a serious national threat. If this isn’t a national strategic threat, what is?”

Though it sounds as if Peter is making a demographic argument, he says that he isn’t—that allowing in a large group of people from a hostile area can be argued strictly on security grounds.

Some do bring up the demographic ramifications of the law. Shaked did so on Monday. “In the end, we’re a nation-state of the Jewish people. We want to protect our unique character of the State of Israel as a Jewish state—Jewish and democratic.”

‘The point of view of citizen’s rights and human rights’

Arnon Soffer, professor emeritus of geography at the University of Haifa who has spent years studying the demographic threat, estimates that without the citizenship law, a half-million Palestinians will enter Israel within 20 years. In 40 years, he puts the number at 1.5 million.

Jalal Banna, a strategist and publicist and Israel Hayom columnist, himself an Arab Israeli, tells JNS that Palestinians are coming regardless of the citizenship law. Because Israel doesn’t recognize them, they “turn into one-parent families” and end up as welfare dependents of the state. He estimates there are 17,000 such families since the law passed in 2003.

“You need to see this from the point of view of citizen’s rights and human rights,” he said, adding that “no state can tell its citizens whom to marry and with whom to raise a family.”

Peter argues it’s not about marriage but citizenship. “Every country in the world—in the West especially, but in the world—puts limitations on requests for immigration by marriage. The difference in Israel is that there is no other Western country that has an enemy state or a dangerous area so close by that people can actually meet on a daily basis and form romantic relationships.”

Peter says that despite a large number of exemptions, the law is a success. “Today, we’re talking about 1,000 requests a year; between 1993 to 2003, we had about 5,000 requests a year. So it dropped dramatically.” (According to updated numbers presented last July to a Knesset committee, the number of citizenship applications from Palestinian territories averaged 800 a year for the last decade.)

However, members of the opposition in the Knesset no longer accept that the law is effective. Knesset member Simcha Rothman of the Religious Zionism Party submitted a permanent replacement law, “The Basic Law: Immigration,” to the Knesset in June. Rothman told JNS that “the opposition’s proposal is to temporarily extend [the current law] for two months, and in the meantime promote the Basic Law on Immigration.”

The coalition hasn’t responded to the proposal.

At a Monday committee meeting, Rothman explained that it was in the course of the current debate over the law that “we heard in a very clear manner that this law isn’t put into practice.” He gave several examples of exceptions made to the law, some under pressure from the Supreme Court. He said just last month, “under the carpet, without anyone paying attention, they amended a regulation so that whoever’s here three years gets a driver’s license.”

“The current law, therefore, does not achieve its purpose because it doesn’t prevent family unification,” he said. “It creates a creeping ‘right of return’ in growing numbers. … The State of Israel needs to make a permanent decision. … We should decide on the basis of a Knesset majority. Either we want here a ‘state of all its citizens’ with the ‘right of return’ … or we want here a Jewish state.”