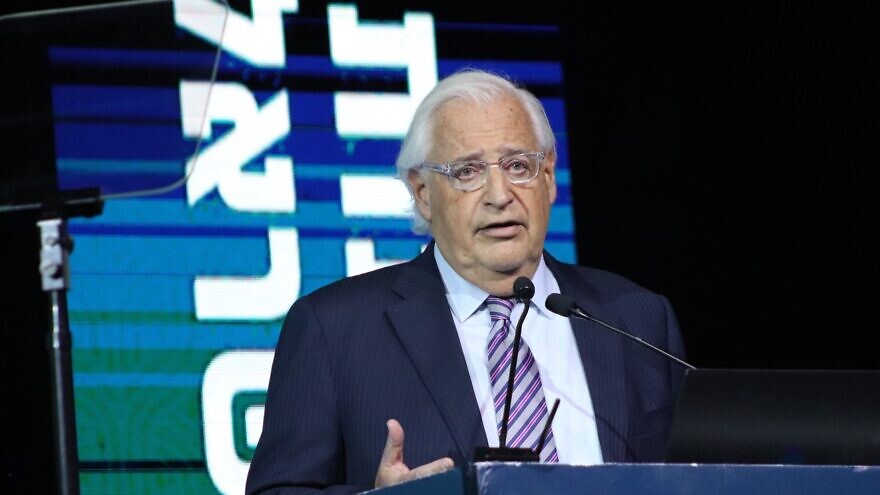 (May 26, 2022 / JNS) Israel and Israel alone can make decisions fateful to its future, and it can start with reaching clarity about its eastern border, said former U.S. Ambassador to Israel David Friedman at the second Israeli Conservatism Conference, which took place in Jerusalem on Thursday.

Israel should base its policies “upon a national consensus as to what is in its best interest” and then defend that policy “without condition or apology,” he said.

“Most politicians will say that at least some portion of Judea and Samaria will always be Israel. Ask them which portion and they have no clear response,” he said.

“Right now, the discourse is entirely confusing and unconvincing. Every political leader since [Menachem] Begin, including Yitzchak Rabin and those associated with the peace camp, has committed to a sizable Israeli presence in [Judea and Samaria]. But what is it,” he said.

“Ultimately, without the application of sovereignty, at least in portions of Judea and Samaria, there will never be a resolution to the Israeli-Palestinian conflict,” Friedman told JNS. “It should be obvious to everyone that the problem is not getting better. It’s a 55-year-old dilemma that I think the longer Israel doesn’t take its sovereignty seriously, the harder it is convincing the world that it’s serious about sovereignty.”

‘It was all part of an overall package’

Friedman said that since Israel’s founding in 1948 it has managed its relations with America by recalibrating its policy to align itself with whichever U.S. administration happened to be in power—“the relationship is important—but bouncing around to suit the policies and eccentricities of a foreign power is not good governance.”

“As critical as it is for Israel to maintain good relations with its allies, especially the United States, first Israel must determine through its democratic channels what is the right course, and only then to make its case to the world.”

“I am confident that the world will respect Israel when Israel respects itself,” he said.

Friedman expressed to JNS the hope that the Trump Mideast peace plan would be resuscitated, describing it as “revolutionary in terms of not requiring any Jews living anywhere in Judea and Samaria to be evacuated from their home.”

“I would point out it was one of the real drivers of the Abraham Accords. So not only was it a template for peace, but it was something that created an environment where Israel was able to normalize with four Muslim nations,” he said.

While Israel made past peace commitments, what differentiated the Trump plan and made the Abraham Accords possible was America’s “unprecedented support for Israel,” including moving the U.S. embassy to Jerusalem, recognizing Israeli sovereignty over the Golan Heights and rejecting the idea that Israeli settlements were illegal.

“We demonstrated to the Gulf and the world that the U.S. and Israel are inseparable, and that other nations as well could enter this circle of trust to begin to get the kind of benefits that Israel receives from its relationship with a strong America,” he told JNS. “So it was all part of an overall package that I think gave comfort to the Arab world.”

The Conservatism Conference was organized by the Tikvah Fund together with the Friedman Center for Peace Through Strength.

Alex Traiman contributed to this report.