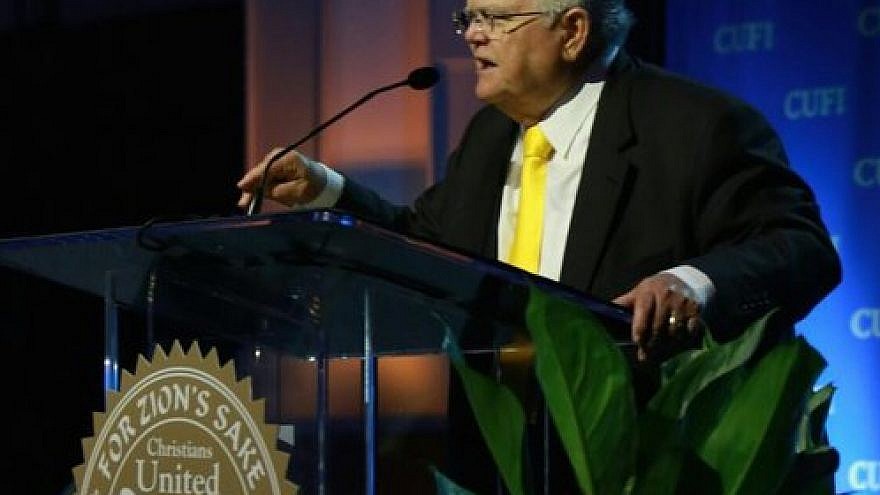 (July 22, 2016 / JNS) While much of the media focused on the recent terror attack in Nice, the failed coup in Turkey, and the Republican National Convention, thousands of evangelical Christians gathered in the nation’s capital this week to show their support for Israel as part of the 11th annual Christians United for Israel (CUFI) Washington Summit.

Although world events may have overshadowed its latest gathering, CUFI’s base of support is louder than ever. CUFI has become not only the self-described largest pro-Israel organization in America, but also likely the largest evangelical Christian organization of its kind. As such, the group will likely play a significant role in shaping the future of American support for Israel.

“Christians United for Israel in 11 short years has gone from 400 people in San Antonio, to 3,500 in our first gathering in Washington, DC, five months later…to 10,000, to 100,000, to 500,000, to 1 million in 2012, to 2 million in 2015. Tonight we celebrate an active Zionist membership of 3.1 million people,” Pastor John Hagee, CUFI’s founder and national chairman, declared in his remarks at the Washington conference as part of its “Night to Honor Israel” celebration.

CUFI defines “members” as email-list subscribers whose addresses do not produce bounce-backs when messaged.

“I am often asked by members of the press, how did this [growth to 3.1 million CUFI members] happen? I say that it is the Lord that has done this. The king of the universe, the God of Abraham, Isaac, and Jacob, let his name be glorified, he has done this,” said Hagee.

CUFI’s Christian-Zionist following has steadily grown despite the past decade’s erosion of support for Israel in other spheres of influence. The movement has also tapped into a desire by many Christians to seek out a connection to their roots amid various global threats and uncertainties.

“It is not possible to say that I am a Christian and not love the Jewish people,” Hagee said.

David Brog, who was one of the founders of CUFI and now serves as director of its executive board, explained that CUFI has become the successor group to previous evangelical Christian movements in the 1980s and ’90s.

According to Brog, many at the time did not realize that support for Israel was one of the core values of the Moral Majority. Instead, people tended to focus more on the social issues, and that is how the Moral Majority is now remembered.

“In the 1990s, the Moral Majority gave way to Pat Robertson’s Christian Coalition,” said Brog. “It was [founded at] the same time, it was a pro-Israel group, but we tended to associate them with social issues because that’s what was hot back was then.”

But the 9/11 attacks changed all of that, Brog explained, turning Israel into “one of the top issues for evangelicals.”

“All of a sudden this distant land of Israel, battling these Islamic enemies, many realized that we are also facing the same threats and enemies,” he said.

CUFI was founded in 2006, five years after 9/11, and has seemingly come along in the right place at the right time to fill the gap left by previous evangelical organizations. Throughout the country, CUFI works with dozens of evangelical pastors who hold CUFI-sponsored events and advocate on behalf of Israel within their communities. This grassroots effort is at the heart of CUFI and may explain why the organization has become such a powerful, yet understated, force in American politics.

Pastor Scott Thomas of the Free Life Chapel in Lakeland, Fla., told JNS.org that CUFI “helps churches and congregation members to embrace and understand the message of what Israel is, and reintroducing them to the Bible again.”

“The Bible did not originate in the church. It originated outside of it, it is a Jewish document. Understanding that has given us context. That educational context has triggered a passion for Israel and the Jewish people, and CUFI has been that vehicle. It has been a natural on-ramp,” Thomas said.

Pastor Tim Burt, who serves as associate pastor at the Living Word Christian Center in Brooklyn Park, Minn., added that CUFI has become a place for fractured pro-Israel organizations to come together in a powerful way.

In his address to the CUFI summit via satellite, Israeli Prime Minister Benjamin Netanyahu said, “CUFI is an amazing organization. In 10 years you’ve gathered more than 3 million members and [have become] active on more than 300 college campuses. CUFI never shies away from standing with Israel and standing with the truth.”

Beyond being a platform for traditional evangelical Christians, CUFI has also made a concerted effort to tap into diversity in America.

“This is in parallel with Israel, where you see people from all over the world, both Jews and non-Jews,” he said. “The church is the same way—people from all ethnic backgrounds, particularly here in the United States, and we have seen growth.”

“If you see the people here [at the CUFI summit],” added Washington, “you see people from every ethnic background, and that’s one reason why we think [CUFI] has grown so much, because people are coming from all different sectors of the church.”