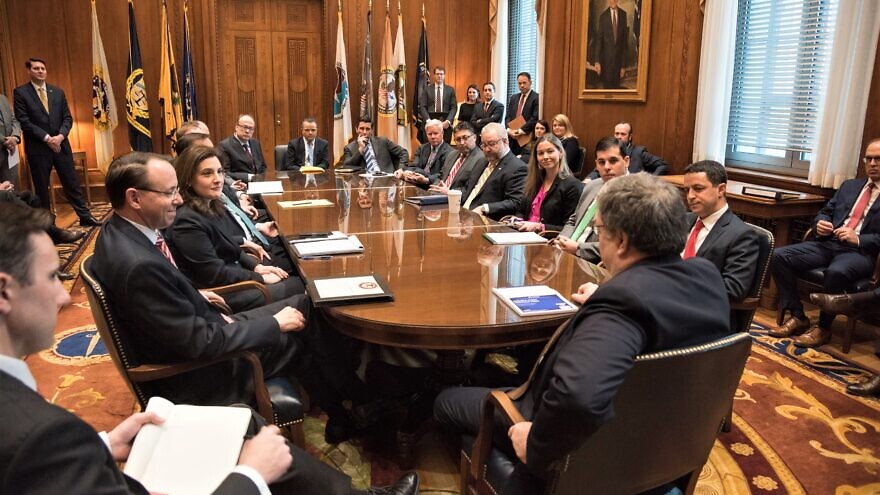 (January 28, 2020 / JNS) U.S. Attorney General William Barr said in a meeting addressing Jewish leaders on Tuesday that the U.S. government has “zero tolerance” for anti-Semitism amid the recent rise in attacks against Jews, especially in New York.

“I’m extremely distressed by the upsurge in violence, hate crimes committed against the Jewish community,” he told the group in Brooklyn, N.Y. “This administration is going to have zero tolerance for this kind of violence.”

Among those at the meeting were UJA Federation of New York CEO Eric Goldstein and Rabbi Meir Soloveichik of Congregation Shearith Israel.

The nation’s top law-enforcement official announced he had directed all federal prosecutors to improve their relationships with the Jewish community, such as designating a liaison to handle matters to that demographic in their jurisdiction.

Additionally, Barr indicated interest for the federal government to further involve itself in handling hate crimes, including ones that would usually be prosecuted by local or state authorities, according to Orthodox Union executive vice president Allen Fagin, who was at the meeting.

Barr was accompanied by Richard Donoghue, U.S. Attorney for the Eastern District of New York, which has jurisdiction over Brooklyn, in addition to the head of New York’s FBI office William Sweeney.

Fagin told JNS that he was encouraged by the attorney general’s commitment, which “in it of itself, without more was an important statement, particularly given the fact that all of those senior law-enforcement officials came to Borough Park to make that announcement.”

He also mentioned that Barr told the Jewish leaders that he would look to direct more federal grants toward houses of worship.

Barr made no mention of New York’s bail reform, according to Fagin.

The law, which took effect on Jan. 1, has come under scrutiny, especially in the aftermath of the Dec. 28 machete attack at a home and prayer hall in Monsey, N.Y., where five of the 100 or so celebrants at a Hanukkah candle-lighting party were injured.

Fagin remarked that the timing of the meeting with Barr “on the heels of the commemoration of the 75th year of the liberation of Auschwitz was an important, symbolic message.”

“Here, we had government at the highest levels proclaiming clearly and unequivocally that anti-Semitic conduct, anti-Semitic crimes would not be tolerated by this government,” he stated, “when we were in the midst of commemorating events that made clear what happens when government does not take such a position.”