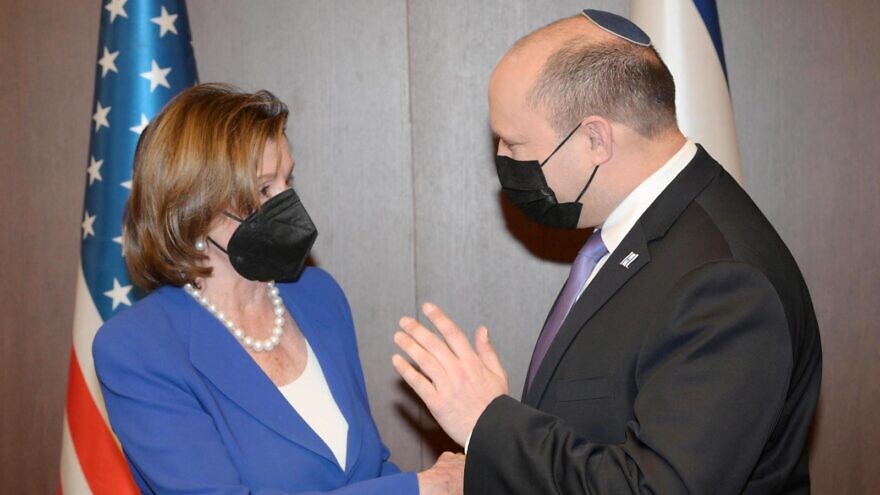 “I want to personally thank you for your ongoing support for Israel,” Bennett told Pelosi. “We have a beautiful country here, a pretty tough place, but with beautiful people. You’ve stood up for Israel. Your dad, may he rest in peace, stood up for the Jews in our darkest hour of history when it wasn’t easy to stand up for Jews.”

In a statement disseminated late Wednesday, Pelosi said that “in our meetings, we conveyed America’s ironclad commitment to the State of Israel and our partnership in advancing our mutual security, economic prosperity and democratic values. We repeatedly reaffirmed America’s commitment to a just and enduring two-state solution that enhances stability and security for Israel, Palestinians and their neighbors.”

The delegation had expressed the “unwavering support of Congress for Israel’s security and regional stability,” Pelosi said of her meeting with Gantz and Lapid. “We also discussed how our nations are together in the fight against terrorism posed by Iran—both in its proximity to Israel, which is a responsibility to us all, and its nuclear development, which is a global threat.”

In addition, at Palmachim Air Force Base, Pelosi’s delegation received a briefing from the Israel Defense Forces and saw the Iron Dome missile-defense system.

“We conveyed that in September, the House, with strong bipartisan support, passed H.R. 5323 in further support of Iron Dome,” said Pelosi.