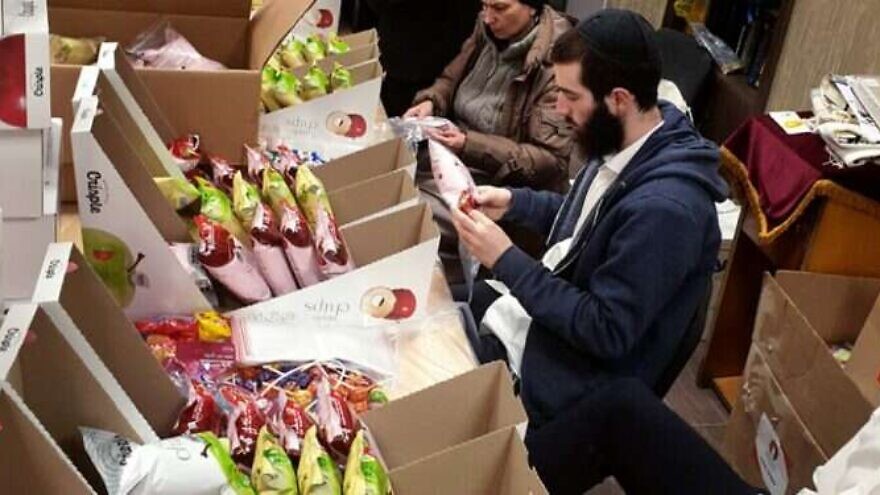 (March 16, 2022 / Israel Hayom) The narrow alleyway leading to the Chabad House in Kishinev, Moldova, was blocked by a truck; the beautiful, 130-year-old synagogue is undergoing a comprehensive overhaul. Workers are pouring concrete.

“We planned on only doing a cosmetic renovation,” said Rabbi Zusha Abelsky. “But the engineer banged on the pillars to the second floor, and we discovered it was all rotting. The renovation itself is a very good thing, but in the middle of it all, a war started.”

Abelsky is the son of Rabbi Zalman Abelsky, who founded Kishinev’s Chabad House in 1989. After he passed, Zusha took the reins, traveling back and forth between Moldova and the United States. Since the war in Ukraine began, he hasn’t left Kishinev, even though his wife and children are across the ocean. He runs around day and night in an effort to absorb and help refugees. Next to the tiny, temporary kitchen is a small prayer hall that has been converted into a meal-packing warehouse.

“Five hundred meals have already been packaged and distributed to the refugees, and now we’re packing another 500,” said Shmulik Zalmanov from Migdal Haemek in Israel, who has lived with his family in Kishinev for the past two years as the Chabad emissary to the city.

“The one-thousand kosher meals we cook every day and distribute to the Jewish refugees who are dispersed throughout the various facilities in Kishinev—we make here in a small, temporary kitchen,” said Rabbi Abelsky. “We’ve added more workers, and everyone cooks around the clock,” he added, noting that one of their main partners in the effort is the International Fellowship of Christians and Jews.

“Our main goal isn’t to only compensate for what the refugees don’t have but to give them a good feeling and make them happy. It is touching every single time to see the joy of the children and adults when they receive Purim baskets,” said Zalmanov.

Among the youngsters packing the meals are two women refugees who volunteered for the task. One of them is Nadia Serman, from Kyiv.

“When the war erupted I was working at the time in Uman. I managed to make it to Odessa, and from there took a bus provided by the Jewish community to Moldova. My daughter escaped to Romania, and I hope to meet her in Israel,” she said. Despite her warm, smiling face, she is on the verge of tears. She has been waiting in Kishinev for 11 days now. Her appointment at the Israeli consulate, which is struggling to keep up with the immigration requests, was scheduled for Wednesday.

“On [Wednesday afternoon] we will erect a large tent in the yard, with heaters, where we will read the Scroll of Esther,” said Rabbi Abelsky. “We are also organizing a Purim party for the preschool children on Thursday, and maybe we’ll even manage by then to get our hands on some costumes for them,” he added.

“Although there are kids here with almost no regular clothes, it’s still important to make them happy with costumes. We are already making plans for Passover as well. Every Chabad emissary knows that even in normal times, Passover plans begin as early as Hanukkah. We were used to shipping out matzot from Odessa, but now they will be shipped from Israel,” he said.