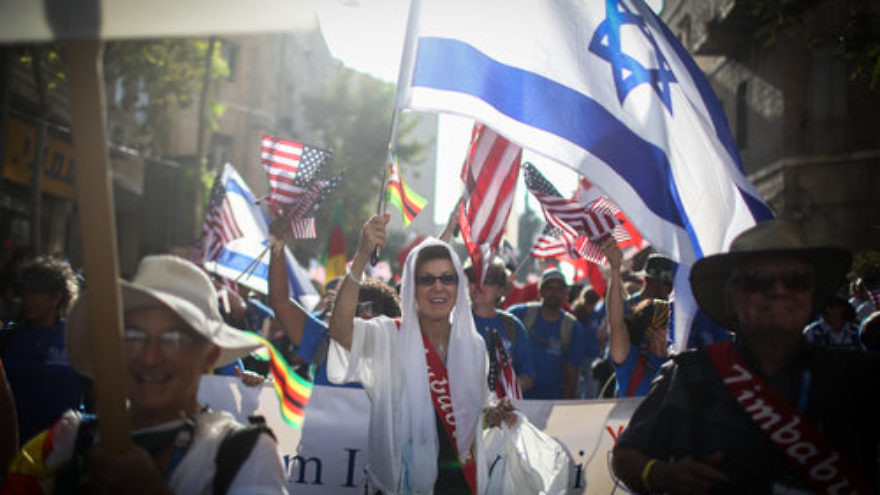 During the Jewish holiday of Sukkot, thousands of evangelical Christians wave Israeli, American and other national flags as they march in a Jerusalem parade as part of the International Christian Embassy Jerusalem’s (ICEJ) Feast of Tabernacles festivities. Credit: Hadas Parush/Flash90.
Republish this article
1114 WORDS
Spread the word.
Help JNS grow!
Share now:

(June 2, 2021 / JNS) With anti-Israel protesters around the world rallying against the Jewish state, a group of rabbis in Israel and North America gathered with leading evangelical pastors and other leaders from the Christian community for a Zoom webinar this past Sunday night to reaffirm their commitment towards working together to stand up for Israel and combat anti-Semitism.

The event was organized by Rabbi Tuly Weisz, founder of Israel365, an organization committed to connecting Christians with the Land of Israel and its people. Other sponsor organizations included the Ohr Torah Stone educational institutions, the Religious Zionists of America World Mizrachi Branch and StandWithUs.

Weisz told the group that while he viewed the past 10 years as the “golden age of Jewish/Christian relations,” he felt some “cracks in the system” following three specific events in recent weeks. Those included the discovery of a family in Jerusalem serving as secret Christian missionaries, along with the findings of a recent study commissioned by researchers at the University of North Carolina at Pembroke, administered by the Barna Group (as reported by The Times of Israel) indicating that young evangelicals might not be as supportive of Israel as their parents.

“But the straw that broke the camel’s back,” said Weisz, was that during the recent flare-up between Israel and Gaza, “I saw that the Jewish community was not as supportive of Israel as in previous conflicts.” He added that “as a result, the Christian community has been pretty quiet over the past few weeks, too.”

Even so, Weisz told JNS that he is optimistic about the future of Jewish/evangelical Christian cooperation if the next generation is given the proper educational context when it comes to support for Israel.

“We need to focus on faith-based advocacy, teaching the younger generation of Christian Zionists the biblical foundation for their support for Israel,” he said. “This is not just a conflict between two faraway foreign entities; this is a conflict between those who believe in the Bible and those who are actively denying the legitimacy of the Bible.”

He said, “If we succeed in educating the next generation of Jews and Christians that our primary connection to Israel is based first and foremost on the Bible, then yeah, I believe there are a lot of reasons to be optimistic. If we double down on faith-based advocacy, we will absolutely get there.”

‘Our impact on the world is not through our numbers’

Evangelical support for Israel has been a controversial topic in recent weeks following comments made by Ron Dermer, Israel’s former and longtime ambassador to the United States, when he told an audience at a Makor Rishon newspaper conference earlier this month that Israel should focus more of its attention in reaching out to evangelical Christians since they make up the bulk of Israel’s support.

Some leaders from the organized Jewish community were angered by Dermer’s comments, accusing him of viewing Christian support of Israel as carrying more traction than Jewish support. However, Weisz felt that Dermer’s comments were spot on.

“Of course, I agree with Ambassador Dermer because of [evangelical] numbers, and because of their passionate and unequivocal support for Israel. The Jewish people are a very small nation. G-d said so all over the Bible. But our impact on the world is not through our numbers; it is through our morality and our value system, which is now referred to as Judeo-Christian values.”

“Unfortunately,” he added, “there is a lack of passion in the Jewish community. We need to be passionately pro-Israel as much as the Christians are.”

Rabbi Dr. Kenneth Brander, president of the Ohr Torah Stone network of 30 educational institutions, which includes the Center for Jewish-Christian Understanding & Cooperation (CJCUC) dedicated to religious dialogue, mutual understanding and active cooperation with Christians, stressed to JNS the importance of the reach evangelicals have in the United States. Therefore, he suggested, they can serve as effective ambassadors for Israel while also countering anti-Semitism.

Brander noted that “the evangelical community has long proven their commitment to the land of Israel and its people, and we need to recognize and show to gratitude to our allies, even when we might have completely different belief systems and may disagree on several other issues.”

He added, “The evangelical community is certainly able to gain trust and access in areas of America, particularly rural America, where anti-Semitism has historic roots. They can act as our ambassadors in spreading the messages of Israel’s legitimate rights to exist and that our sincere desire is to live in peace with our Arab neighbors.”

He continued, saying “a major part of this battle with anti-Semitism is fighting misinformation, and in that regard, we believe that the evangelical community is an asset and gives us access to audiences that might be less receptive to our direct messages.”

During the webinar, Brander said that as the child of Holocaust survivors, he had a tremendous appreciation that “Christians are taking responsibility now that anti-Semitism doesn’t enter the church.”

“You are watchmen on the wall for Zion, and I am eternally grateful,” he said as he blessed those Christians on Zoom for their “heroic work” in standing for Israel and honoring biblical values.

‘Protect and support the Jewish people’

Donna Jollay, director of Christian relations for Israel365, based in the United States, also spoke on the webinar, and told JNS as Holocaust survivor and Nobel laureate Elie Wiesel said “the opposite of love is not hate, it is indifference.”

She said “we need to come alongside our Jewish brethren without any agenda, other to support them. I believe that the God of Abraham, Isaac and Jacob has given Christianity the opportunity in every generation to protect and support the Jewish people, and we have failed horrifically in this, at such a high cost of the Jewish people, for 2,000 years.”

Nevertheless, she added, “I can say personally it is a huge blessing for the world for the brave ones who are involved. May this be the generation that has a heart of Ruth towards the ‘apple of God’s eye’ and do everything we can to stand with the people of Israel—‘Am Yisrael Chai!’ ”