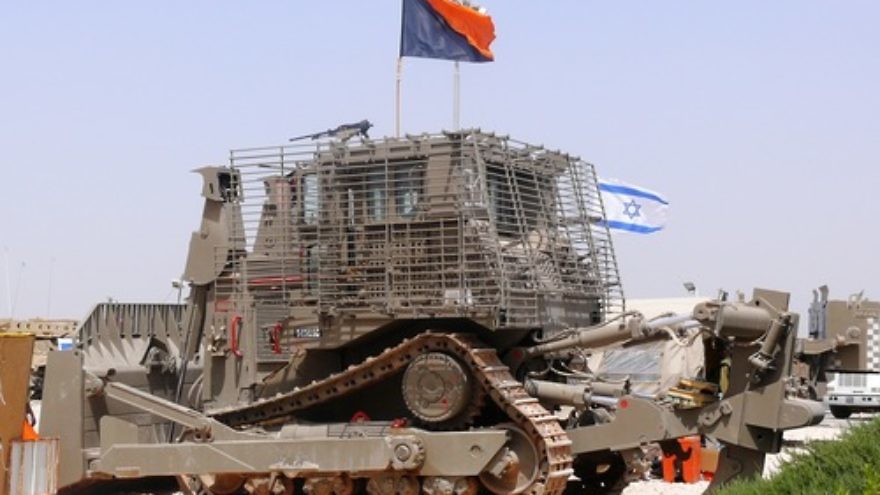 An IDF Caterpillar D9 bulldozer. In calling for a boycott of Caterpillar—long a target of the anti-Israel BDS movement—Dalit Baum speaks of the bulldozers' use to “raze Palestinian homes [and] construct the separation barrier,” ignoring the fact that the demolished buildings were being used to shield attacks or belonged to terrorists who murdered innocent civilians, writes Robin Joshowitz. Credit: MathKnight via Wikimedia Commons.
Republish this article
764 WORDS
Spread the word.
Help JNS grow!
Share now:

In an interview earlier this month with The Forward, Dalit Baum, a leading Boycott, Divestment and Sanctions (BDS) movement activist, boasted about an increased focus on corporate social responsibility—the idea that companies and investors ought to make decisions based on ethical principles beyond legal requirements and business interests. According to Baum, any company that profits from a business related to the Israeli occupation cannot claim to be socially and morally responsible, and therefore investors should remove them from their portfolios. Claiming altruism and impartiality, Baum declared that the same criteria for corporate responsibility are applied for every region in the world because “a human rights screen by definition is universal.”

In reality, however, Baum and anti-Israel BDS campaigners are attempting to manipulate the concept of corporate social responsibility to advance their highly discriminatory anti-Zionist ideology. Baum masks her single-minded agenda against Israel through loose language such as “universal human rights,” which, as seen through her actions, are far from universal.

Baum has been a longtime core leader of BDS. She co-founded the Israeli pro-BDS group “Who Profits,” and has also been associated with many virulent anti-Israel NGOs, such as in Boycott from Within, Zochrot, Anarchists Against the Wall, and Women in Black. Although Baum uses the language of morality and peace, her actions and involvement in these groups promote the demise of the Jewish state, not peace between Israelis and Palestinians.

Baum is currently running BDS campaigns for American Friends Service Committee (AFSC), a Quaker organization with a long history of pursuing anti-Israel agendas. In recent years, and with funding from the Rockefeller Brothers Foundation in New York, AFSC has propelled itself to the forefront of the BDS campaign. According to Alex Joffe and Asaf Romirowsky, AFSC’s views on Israel have evolved from a “nominally neutral, though not particularly sympathetic, point of view to a violently hostile stance.” Their analysis shows that AFSC empathizes with anti-Israel terrorism, accuses Israel of crimes against humanity, and seeks to cripple Israel’s economy and security. Like Baum, AFSC’s preferred BDS methodology includes “support[ing] campaigns which aim to end corporate support for Israel’s settlement policy and thereby contribute to ending settlement growth and construction.” But in this as in other aspects of the BDS movement, opposing settlements is a façade.

The clear evidence notwithstanding, Baum dismisses any claim of an obsession with demonization and divestment from Israel, instead insisting that “no unique focus on Israel exists.” But the online tool created by Baum (as discussed in The Forward’s article) to help investors identify companies involved in “specific severe human rights violations” includes only violations related to “Israel’s occupation of the West Bank or to mass incarceration in the United States.” Baum has consistently disregarded similar issues in Cyprus, Ukraine, Iraq, and many other conflicts and contexts.

And what “specific severe human rights violations” does Baum seek to combat by co-opting the ideas of corporate social responsibility? While Baum does not elaborate in the interview, the AFSC online tool identifies “severe violations” very broadly in order to subsume and injure the entire Israeli economy. The three dimensions (“screens”) in Baum’s social responsibility framework refer to prisons—specifically the supply of privatized services to the prison industry; occupation (with no mention of Palestinian rejectionism and incitement); and military—“the supply of weaponry used in war crimes perpetrated by Israel against Palestinians”—with no mention of terror.

For example, in calling for a boycott of Caterpillar (long a target of the anti-Israel BDS brigade), Baum speaks of their use to “raze Palestinian homes [and] construct the separation barrier.” In contrast, this self-defined crusader for human rights erases the fact that the demolished buildings were being used to shield attacks or belonged to terrorists who murdered innocent civilians, and that the security barrier was built to prevent terrorist attacks. She artificially and immorally separates the action from the reaction, patronizingly ignoring the underlying causes and Palestinian agency. Then, the moral standards that Baum cites to justify her campaigns are applied narrowly and exclusively to Israel, in direct violation to the universality required in applying the principles of corporate social responsibility.

In all of these actions, Baum inadvertently highlights the hypocrisy of BDS and the discriminatory targeting of Israel and companies that do business with or in Israel. For Baum and her allies, corporate social responsibility is simply the latest catchphrase used for political warfare against Jewish self-determination in Israel.