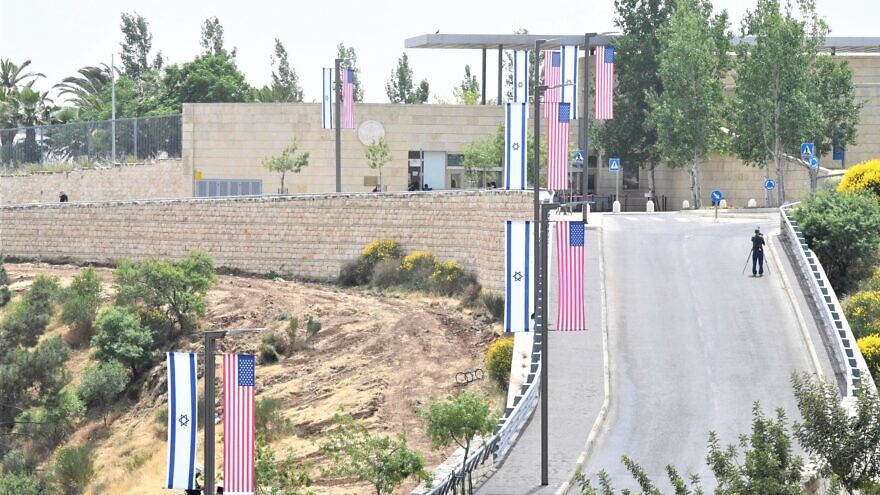 Jerusalem on the day of dedicating the new U.S. embassy after it was moved there from Tel Aviv, May 2018. Credit: Wikimedia Commons.
Republish this article
894 WORDS
Spread the word.
Help JNS grow!
Share now:

(July 28, 2020 / JNS) In a move that bodes well for Israel, the Democratic National Committee’s platform committee voted on Monday to reject additional language that would make the party’s stance on the Jewish state more critical.

The committee voted 117-34 to reject adding the word “occupation” and a condition of U.S. assistance to Israel on the Jewish state not going ahead with its plans to apply sovereignty to parts of the West Bank, also known as Judea and Samaria.

The platform includes language that expresses support for the U.S.-Israel relationship, a pledge to maintain security funding for Israel and backing for a two-state solution “that ensures Israel’s future as a Jewish and democratic state with recognized borders and upholds the right of Palestinians to live in freedom and security in a viable state of their own.”

Regarding the status of Jerusalem, the platform states: “We believe that while Jerusalem is a matter for final status negotiations, it should remain the capital of Israel, an undivided city accessible to people of all faiths.”

This reflects the stance of the presumptive Democratic presidential nominee, former U.S. Vice President Joe Biden, that the U.S. embassy, which U.S. President Donald Trump moved from Tel Aviv to Jerusalem in May 2018, five months after recognizing Jerusalem as Israel’s capital, should remain there.

The platform expresses opposition to “any effort to unfairly single out and delegitimize Israel, including at the United Nations or through the Boycott, Divestment and Sanctions [BDS] movement, while protecting the constitutional right of our citizens to free speech.”

However, the Democrats call for the United States to rejoin the U.N. Human Rights Council, which the Trump administration withdrew from in June 2018 with then-U.S. Ambassador to the United Nations Nikki Haley citing the world body’s “chronic” bias against Israel as one of the primary factors for the withdrawal.

On Iran, the platform calls for “returning to mutual compliance” with the 2015 Iran nuclear deal, which the United States withdrew from in May 2018, reimposing sanctions lifted under it along with enacting new financial penalties in what the Trump administration has called a “maximum pressure” campaign.

“The nuclear deal was always meant to be the beginning, not the end, of our diplomacy with Iran,” reads the platform. “Democrats support a comprehensive diplomatic effort to extend constraints on Iran’s nuclear program and address Iran’s other threatening activities, including its regional aggression, ballistic missile program, and domestic repression.”

Moreover, the platform expresses a “need to reset our relations with our Gulf partners to better advance our interests and values. The United States has an interest in helping our partners contend with legitimate security threats; we will support their political and economic modernization and encourage efforts to reduce regional tensions. But we have no interest in continuing the blank-check era of the Trump administration, or indulging authoritarian impulses, internal rivalries, catastrophic proxy wars, or efforts to roll back political openings across the region.”

Finally, the platform states that the Democrats will work to combat bigotry, including towards Jews.

“We will give hate no safe harbor. We will never amplify or legitimize the voices of bigotry, racism, misogyny, anti-Semitism, Islamophobia, or white supremacy,” reads the platform. “Democrats will protect and promote the equal rights of all our citizens—women, LGBTQ+ people, religious minorities, people with disabilities, Native Americans, and all who have been discriminated against in too many ways and for too many generations.”

Democratic Majority for Israel and the Jewish Democratic Council of America applauded the party platform, while the Republican Jewish Coalition faulted it.

“From Joe Biden on down the ticket, Democrats running on this 2020 platform will capture the imagination and earn the votes of a decisive majority of Americans,” said DMFI president and CEO Mark Mellman in a statement. “This platform continues and expands upon our party’s proud tradition, and Joe Biden’s long history, of supporting a strong U.S.-Israel relationship.”

Goldman went on to say that the platform is “unequivocal in its support of the U.S.-Israel relationship and the wide range of domestic policy issues of importance to Jewish voters. A small handful of Israel-related amendments were defeated and the final text reflects Joe Biden and Democrats’ strong support of Israel.”

RJC spokesperson Neil Strauss told JNS, “Democrats can put whatever they want in their platform; we know, by their actions, what their party stands for. Joe Biden has invited Bernie Sanders’ viciously anti-Israel foreign-policy team onto his team. Nancy Pelosi endorsed the most anti-Semitic member of her caucus, [Minnesota Rep.] Ilhan Omar.

“Supposedly pro-Israel groups on the left have stood by and tacitly supported the biggest pro-BDS voices in the party, [Michigan Rep.] Rashida Tlaib and Omar,” he continued. “So they can go ahead and push off the progressive wing from putting on paper that the Democrat Party is no longer a pro-Israel party, but the party leadership has already shown the world that Democrats have abandoned Israel.”

The platform will be formally approved by delegates at next month’s Democratic National Convention.