(March 29, 2022 / JNS) The last European National Conservatism Conference in Rome narrowly averted cancellation. It took place in February 2020, weeks before Italy imposed the first coronavirus-related lockdown in Europe. Two years later, conservatives across Europe cast off their masks for the Brussels conference at a time when Belgium lifted most COVID-19 restrictions, thus enabling the March 23-24 gathering of some 250 conservative intellectuals, political leaders, activists and students.

But just as the pandemic seemed to subside, a new menace replaced it. On the first day of the conference, traffic jams disrupted the city as U.S. President Joe Biden arrived for the NATO Summit attended by international leaders to figure out how to jointly counter a belligerent, menacing Russian President Vladimir Putin, whose forces invaded Ukraine on Feb. 24.

“NatCons” offered their own answer: empowering nation-states. The war between Ukraine and Russia, they argued, is a war between a proud nation-state and ambitious Russian imperialism run amok, seeking domination over other peoples and lands.

Kick-starting NatCon Brussels, Ukrainian Ambassador to the European Union Vsevolod Chentsov gave credence to the nationalists, explaining how it was the power of Ukrainian patriotism that succeeded in staving off Russian forces, despite grim predictions of a quick defeat.

“It’s about the bravery and strength of our army, but I think the biggest phenomenon of this war is the Ukrainian people as a nation, and I think this event is very timely and the right place to talk about Ukraine as a nation—as a political nation,” said Chentsov.

National Conservatism is a political and intellectual movement led today by Israeli thinker and author, Yoram Hazony, president of the Herzl Institute in Jerusalem (and a conference co-sponsor) and author of the best-selling Virtue of Nationalism, which serves as the de facto contemporary handbook for its ideas. The movement, often linked with former President Donald Trump’s “America First” mantra and Brexit, advances the biblical notion that an alliance of nation-states—each with firm borders, a strong people’s army, and a sense of national purpose generated by a shared land, culture and language—is the best guarantor of world peace and individual freedom.

“There’s a possibility that you could say: ‘I don’t believe in all of that nationalism stuff,’ ” Hazony told the crowd at the Concert Nobel events hall located near E.U. headquarters. He was also behind the American counterpart of the November conference held in Orlando, Fla. “ ‘I support the Ukrainians because I believe there is a war of black against white, light against darkness, liberalism against tyranny.’ And there are some people who say that, ‘it doesn’t matter what the border is. What matters is that we liberals continue to fight to advance liberalism.’ ” 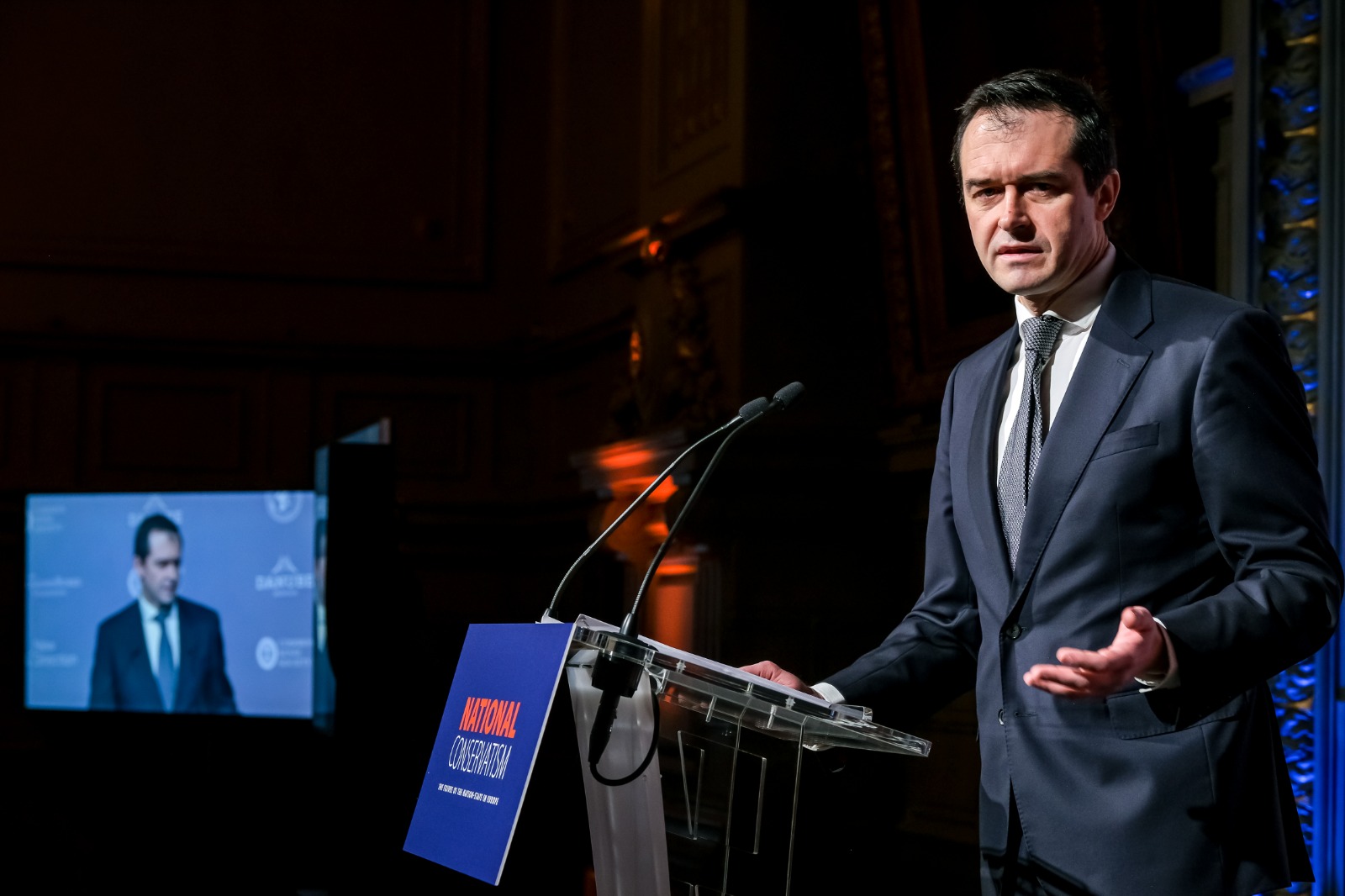 Such liberal orthodox thinking, he said, explains why some countries, such as Israel and Hungary, are sometimes wrongly shamed as “pro-Putin” for not supporting Ukraine to the liberals’ taste, such as with tougher sanctions against Russia or with military support.

Poland and Hungary, countries often at odds with E.U. immigration, energy, and family policies, sounded their opposition to the West’s movement towards globalization with keynotes delivered by Poland’s Prime Minister Mateusz Morawiecki (via video) and Hungary’s Justice Minister Judit Varga. Hazony represented, unofficially, an Israeli point-of-view, saying: “The same American voices that we hear saying, ‘Israel absolutely has to be on the side that we say Israel has to be on, that Israeli interests are the same as Ukrainian interests, they are the same as American interests,’ but where are they when it comes to Israel having to deal with the nuclear bomb that’s being created by the Russians and the Americans, God forbid, in Iran?”

‘Each of us has its own interests’

Panelists and speakers shared the view that the European Union is increasingly acting as a sovereign suppressing the national interests of its members—a posture that runs the risk of being intensified amid Russia’s onslaught.

“We hear now calls from liberals in Europe and also in America that the war in Ukraine demands from us, Europeans, a process of accelerating the creation of European super-state,” said Israeli historian Ofir Haivry, vice president for Academic Affairs at the Herzl Institute. “There should be a united European army, a European command which vetoes power over national governments and gives more resources to fight Russian dominance.”

A “liberal Empire,” these European liberals argue, is the best answer to Russian imperialism. “But, in fact, it was exactly the shriveling of national armies in Europe and the alliance of the independence of nations that allowed Russia to attack Ukraine.”

In the two years between the Rome and Brussels conferences, it was the NatCon approach, argued conference chairman Christopher DeMuth, which paved a way out of the pandemic.

“We are now coming to understand—better late than never—that comprehensive lockdowns and school closures were largely ineffective in controlling COVID-19 but fabulously costly to our economies and social well-being,” DeMuth said in his opening address. “We have gained this understanding precisely because of the knowledge generated by nation-led responses, which would have been obscured by uniform responses directed by the WHO, E.U. or the federal government in the United States.”

Likewise, it’s not the bureaucrats in Brussels or Washington who should dictate how each nation should respond to Putin’s aggression.

“We want free nations that are free to determine their own interests through negotiation and a brotherhood among nations,” said Hazony. “When a crisis comes like this one, each will put in what it can, and we’ll fight about what that is—we’ll change each other’s minds and we’ll pressure one another. But if you can’t understand that each of us has its own interests, why do we bother having elections so that we have representatives of our own people? This, is by the way, a biblical tradition—that the king should be from your own people.”