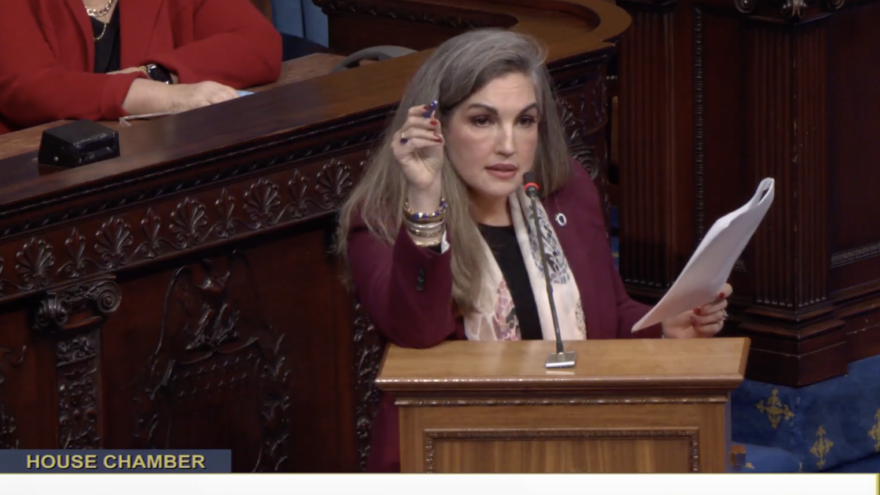 (January 5, 2023 / JNS) A former Massachusetts state legislator is being condemned by Jewish and Zionist organizations for accusing Israel of “being on a mission to kill Palestinians.”

During her final week in office, Democratic Rep. Jamie Zahlaway Belsito, who represents the fourth Essex district in the northeastern part of the state, took to Twitter on Dec. 29 to attack Israel and its new government led by Prime Minister Benjamin Netanyahu.

“The US must acknowledge that the @Israel administration is an apartheid run thuggery terrorist regime on a mission to kill Palestinians,” tweeted Belsito, whose last day in office was Wednesday. “Killing and land taking has nothing to do with anti-semitism. It is genocide.”

Jeremy Burton, CEO of the Jewish Community Relations Council of Greater Boston, told JNS, “We vociferously reject and denounce her comments regarding the state of Israel.” He added that while harsh criticism of “any duly elected government and its policies, or of the ongoing relationship of occupation between Israelis and Palestinians, is legitimate—even when it is painful to hear,” Belsito’s attack crossed the line.

“Characterizing Israel—an American ally and itself the target of an enduring antisemitic campaign of elimination since its founding—as a ‘terrorist regime’ engaging in ‘genocide’ is both unacceptable and repugnant,” Burton said. “In using this language, Rep. Belsito comes dangerously close to invoking antisemitism rather than offering legitimate criticism.”

Belsito was elected to the state house in a special election in 2021 and did not seek re-election this past cycle after redistricting in the state. In her farewell speech to fellow lawmakers, she alluded to rhetoric similar to her tweet, yet did not mention Israel by name.

When discussing her achievements as the first Arab-American ever elected to the Massachusetts House of Representatives and the first Syrian-American woman elected to an office in the commonwealth, she recounted how her grandfather’s family fled the Middle East.

“My grandfather’s family escaped genocide in Syria, settling in the South End [of Boston],” she said. “The genocide my family escaped may have ended, and in its place mass genocide has continued in the Middle East and we must acknowledge that truth.”

“The world cannot allow a 60+ decade genocide to continue as they continue to kill Palestinians, bulldoze their homes and take over their land,” Belsito tweeted.

Also in December, Belsito shared a tweet endorsing a film about Israel’s War of Independence, claiming that “the United States has ZERO understanding of what the #Nakba is”—referring to the Palestinian narrative (using the Arabic word for “catastrophe”) on the 1948 war.

She added that the “1948 European British Zionists created a hell on earth. This movie is about visceral hate, ethnic cleansing, terrorism and apartheid.”

The Anti-Defamation League’s New England regional office also condemned Belsito in a Twitter thread, calling it disappointing that she “would use her platform to spread false statements and sow division.”

“Rep. Belsito’s inflammatory comments go beyond criticism of Israeli policies and contribute nothing to fostering either the climate or conversations required for peace,” ADL New England added.

In April, Belsito compared the situations in Syria and Ukraine to the situation in Israel, and accused the Jewish state of being soft on Russian President Vladimir Putin.

“Russia has helped [Bashar] Assad extinguish and push out the Syrian people for the past 9 years, creating a worldwide refugee crisis that most people have forgotten or don’t care about. Israel continues to do the same to Palestinians and won’t condemn Putin,” she tweeted.

Israel has contributed millions in humanitarian aid, sent thousands of military gear items and taken in more than 33,000 Ukrainian refugees since the Russian invasion.

Jonah Cohen, communications director for the media watchdog CAMERA, called it “deplorable” that anyone with a capacity to influence people “would espouse the baseless, bigoted claims made by former Representative Belsito.”

“Israel is a multi-ethnic democracy in a region of autocratic and sometimes criminal states, like Syria and Iran, where human rights are brutally trampled. Belsito’s numerous, false comments are a disservice to her former constituents,” Cohen said.

Belsito did not respond to a request for comment from JNS.