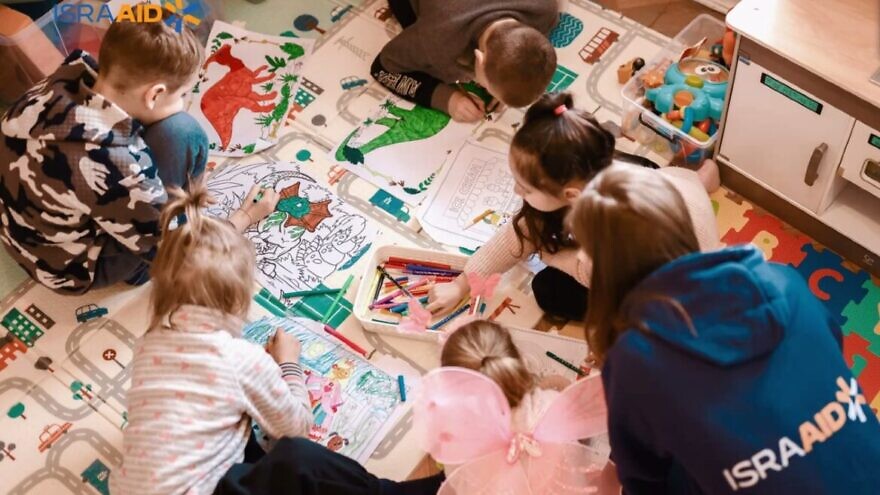 (August 23, 2022 / Israel21c) The humanitarian aid experts at Israeli nonprofit IsraAID are used to disasters, but even they admit that what is happening in Ukraine is exceptional.

“The Ukraine crisis is a record-breaker in terms of its scale,” says Michal Bar, IsraAID’s director of emergency programming and operations.

“We’re seeing the highest number of refugees since the Second World War. This is unprecedented,” she adds.

Russia invaded Ukraine on February 24. In the six months since, some 5,000 Ukrainian civilians have been killed and 12.5 million displaced—about 6.3 million internally and 6.2 million outside Ukraine.

The war rages on, continuing to wreak destruction on Ukraine and its 44 million citizens, and severely disrupting the world’s food, energy and financial markets.

Right from the start, Israeli aid organizations rushed to respond, but as IsraAID CEO Yotam Polizer acknowledges, Ukrainians’ needs are growing urgently even as the world’s attention to their plight fades.

Estimating that 16 million Ukrainians are now in desperate need of humanitarian assistance, IsraAID has announced a five-year plan to continue and expand multiple programs there.

It’s not the only Israeli aid organization still on the ground helping. NATAN Worldwide Disaster Relief, SmartAID, United Hatzalah and Dream Doctors and several others are also doing their part. 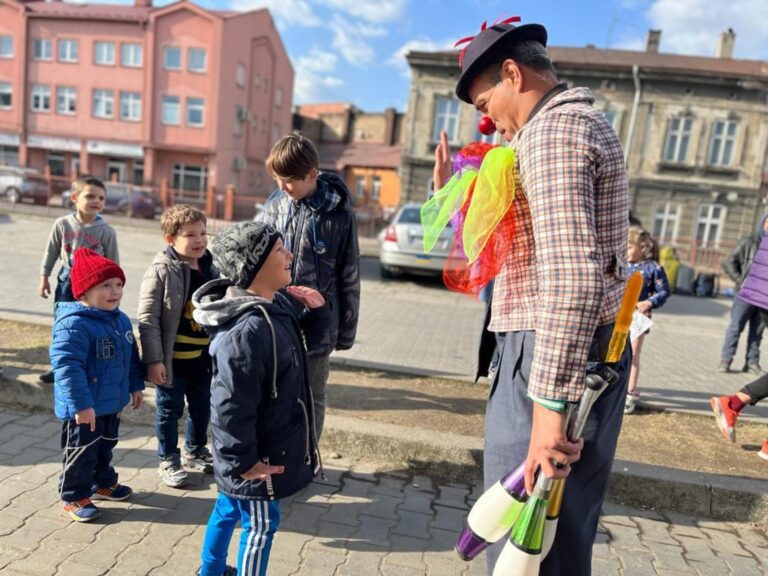 More urgent than ever

Some 560,000 Ukrainians, mainly women and children, fled to Moldova at the start of the war. About 100,000 remain, unable to return home for the foreseeable future.

The organization recently started offering trauma counseling and psychosocial support inside Ukraine, in Odessa and Kyiv; and partnered with MASHAV, (Israel’s Agency for International Development Cooperation) and the Israeli Embassy in Ukraine to bring potable water to Mykolaiv, near Odessa. 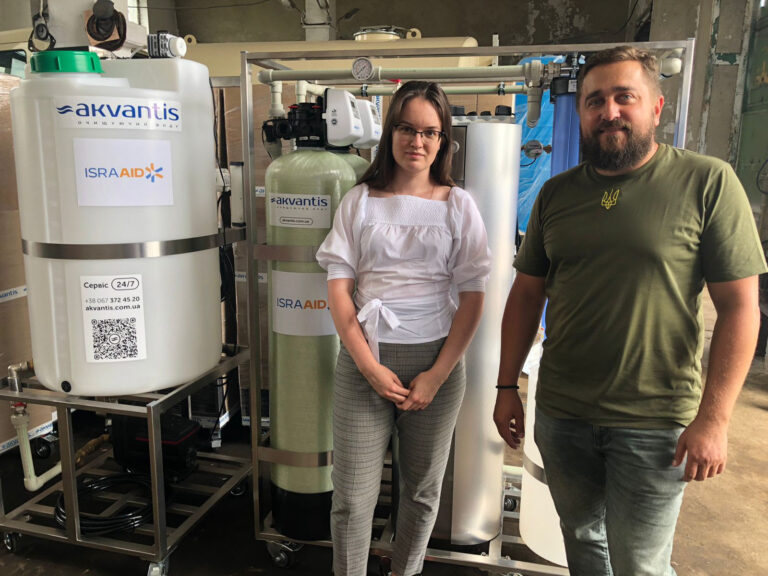 “Their water supply was cut off after the invasion, and IsraAID worked with the municipality on locating groundwater and providing four reverse osmosis machines to provide drinking water to the city,” Bar says.

IsraAID established a logistics hub in Tulcea, Romania, through which about $30 million worth of food and medical and hygiene supplies have so far been shipped to previously unreachable pockets of displaced Ukrainians in Romania and southeast Ukraine. 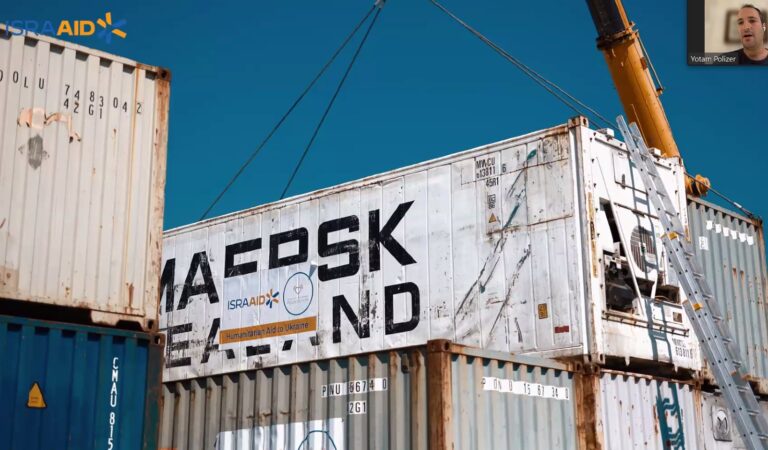 “We need to enhance collaboration, working with multiple countries, and extend our support within Ukraine. We are developing our ability to provide logistic support over huge geographic distances,” Bar says. 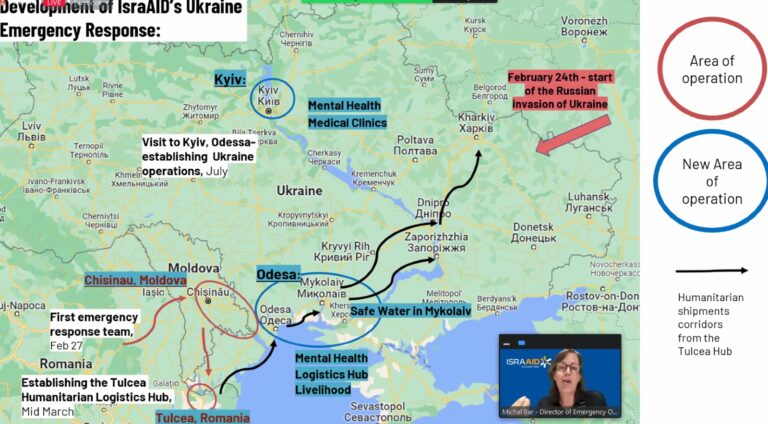 IsraAID’s Michal Bar showing a map of the NGO’s activities in and around Ukraine. Source: Screenshot. 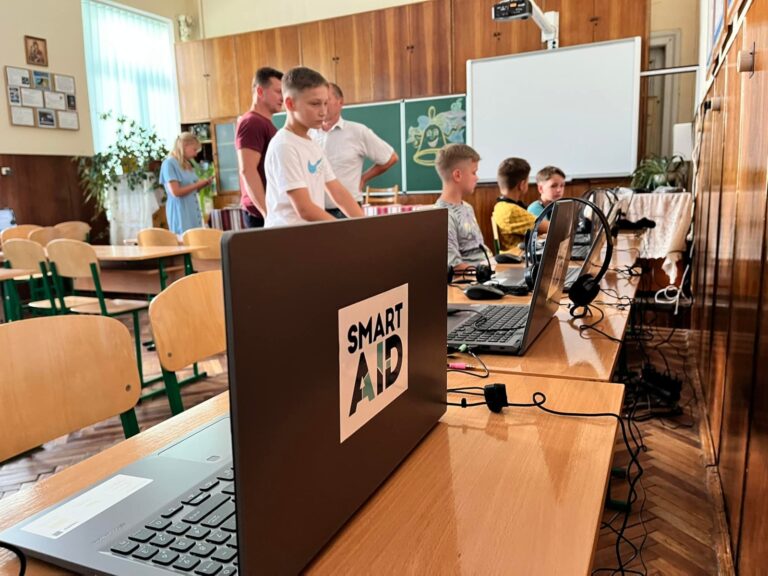 One of 140 SmartAID smart classrooms in Ukraine. Photo courtesy of SmartAID.

“Now we are opening 15 telemedicine units across the country,” says Founding Director Shachar Zahavi, “and we’ve started a huge campaign with European company Kärcher to steam-clean the temporary shelters across Ukraine due to the rise of viruses and mold.” 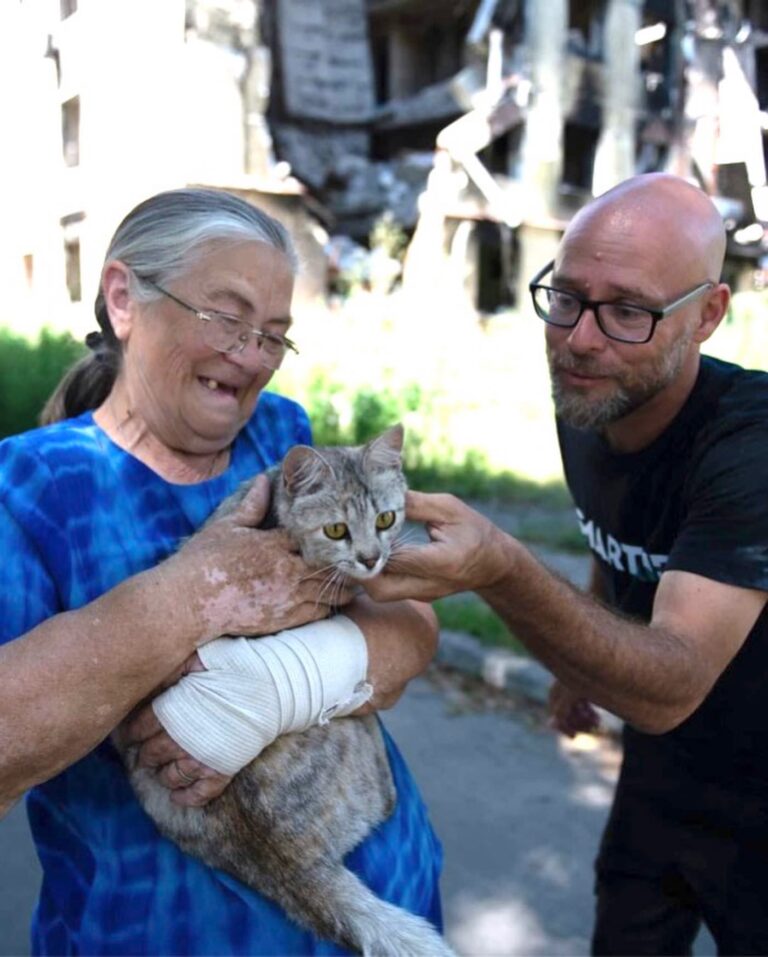 SmartAID Director Shachar Zahavi with a woman who lived in the bombed-out building, seen behind them, in Hostomel, Ukraine. Photo courtesy of SmartAID.

Dream Doctors has sent 10 teams of trained therapeutic clowns to bring smiles and hope to Ukrainians crossing into neighboring countries, often in bitterly cold weather. Additional teams are on their way to work intensively with the many children stuck in refugee shelters along the Ukrainian border.

As the flow of refugees to the borders has slowed, UH has refocused its efforts on providing onsite medical care in the Ukrainian cities of Uman and Kyiv.

“As the war advances, we continue to respond to the increasing and developing needs of Ukraine’s people to assist refugees as well as hospitals, vulnerable people, and Jewish communities within Ukraine,” said a UH spokesman.

“We anticipate chartering additional cargo flights to bring aid to Ukraine communities and hospitals in dire need of food, medicine and medical supplies; stepping up our ambulance evacuation missions; and supporting the refugees we have brought to Israel.” 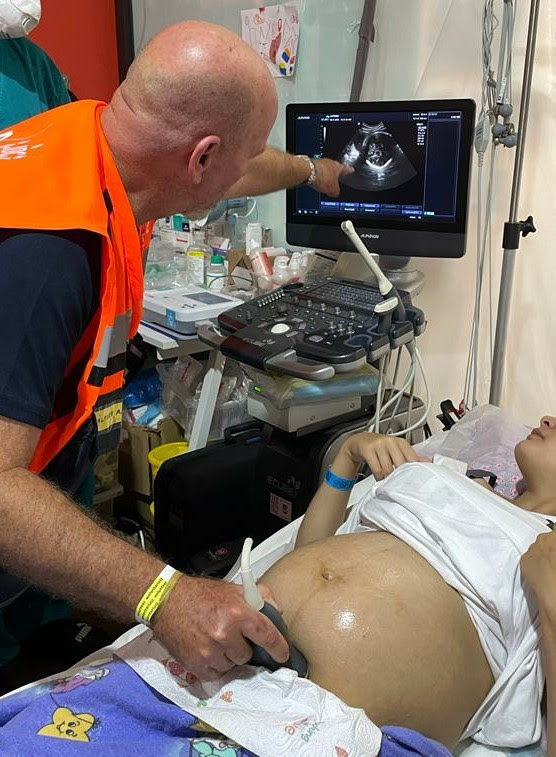 All told, more than 100 NATAN volunteers have given medical and psychosocial care to about 10,000 Ukrainian refugees in Poland. Working with locals, they operate two clinics, a secured playground and a Women’s Care Corner.

This summer, NATAN organized a summer camp for Ukrainian teenagers in the Polish countryside.

Another summer camp, accommodating 100 Ukrainian children, was organized and funded by the Israeli nonprofit Lev Echad (One Heart) Emergency Civilian Aid in cooperation with the Lviv Municipality and the Israeli Education Ministry.

“Therapeutic activities, such as art therapy, allow the children to process their trauma,” Lev Echad Director Tomer Dror said, noting that campers and counselors wear shirts with the Israeli flag on them.

“This is what ‘light unto the nations’ looks like,” Dror said.

Material and tactical aid from Israel and Israeli companies continues as well.

In April, the Israeli Ministry of Defense sent helmets and flak jackets for Ukrainian soldiers. In July, the ministry shipped 1,500 helmets, 1,500 protective vests, hundreds of protective suits for mine clearance, 1,000 gas masks, and dozens of CBRN (chemical, biological, radiological and nuclear) filters to Ukrainian rescue forces and civilian organizations. 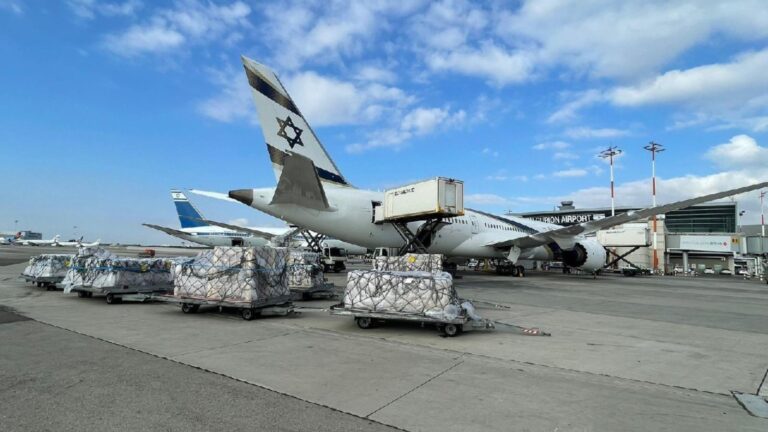 Protective equipment on its way to Ukraine from Israel. Photo courtesy of the Israel Defense Ministry Spokesperson’s Office.

Tech company Carbyne is enabling Ukrainian rescue teams to get to emergencies faster with the help of its interactive, cloud-based communications platform that sends contact centers real-time location, video, photos and texts from civilian smart devices.

Founder and CEO Amir Elichai said Carbyne—which has a development center in Ukraine — had already conducted several pilots of its system there before the war. After the Russian invasion he contacted the Ukrainian deputy prime minister and offered Carbyne’s technical assistance for free.

Within two weeks from the start of the war, Carbyne began putting the system in place. It’s now operating across 22 locations to provide real-time information about missile strikes, destroyed buildings and where emergency medical services were needed.

As of mid-June, some 33,000 Jewish and non-Jewish Ukrainians had fled to Israel since the start of the conflict, with approximately 25,000 still in the country. A Ukrainian refugee even won the Jerusalem Marathon in March.

About a hundred Ukrainian children and their caregivers from the Chabad-run Alumim orphanage were taken in by Keren Kayemeth LeIsrael-Jewish National Fund (KKL-JNF) Nes Harim Field and Forest Education Center in April. Their expected month-long stay in Israel has been extended indefinitely as the war continues. 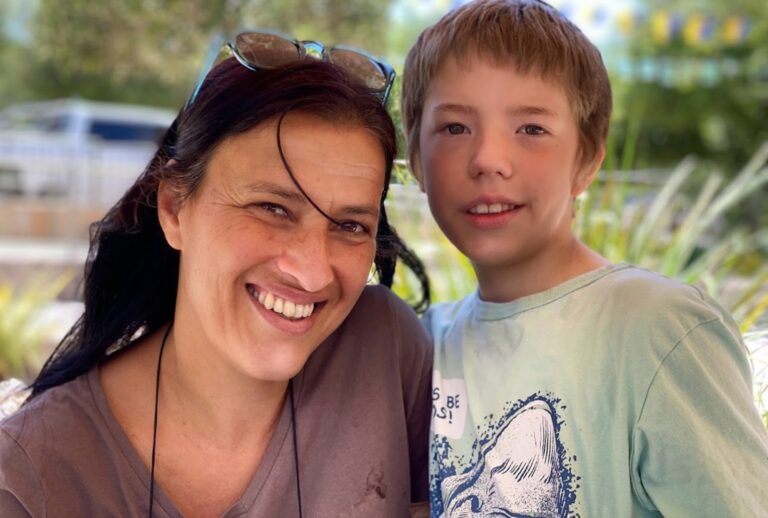 Gili Maymon, manager of Nes Harim, with Moshik, a child from Ukraine. Photo by Nicky Blackburn.

“KKL-JNF are doing a great charity, giving us this beautiful place. We came somewhere where no one knows us, and they gave us such an incredible response,” said Alumim principal Malka Bukiet.

Another 50 young Ukrainian refugees were taken in by Hadassah youth villages through the efforts of Israel’s Ministry of Education and Jewish Agency for Israel (JAFI), while 13 math prodigies found shelter at Bar-Ilan University’s International School.

Twenty mental-health professionals from the Ukraine were flown to Jerusalem to participate in the three-week International Summer Course on Trauma and Resilience given by the Metiv Israel Psychotrauma Center at Herzog Hospital. 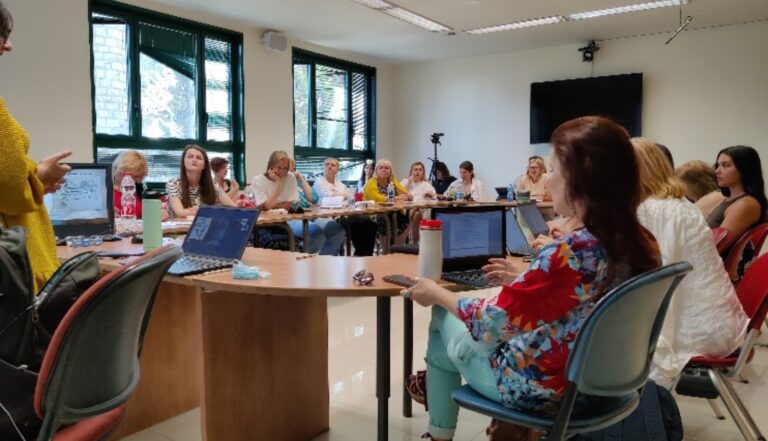 An additional 27 Ukrainian therapists traveled to Israel for training by specialists from the NATAL Trauma and Resiliency Center in Tel Aviv.

The focus was on treating war-related anxiety and trauma, especially in children, military veterans, prisoners of war, victims of sexual violence and refugees. The course, sponsored by the Charles and Lynn Schusterman Family Philanthropies and Jewish Federations of North America, is continuing online.

And Hadassah University Medical Center in Jerusalem hosted Ukrainian oncologists in May who came to learn methods for providing treatment efficiently under difficult conditions. With support from Hadassah Women in America, more training is planned.

Israelis reacted to the Russian invasion with a strong sense of personal connection and communal responsibility to some 300,000 Jewish Ukrainians. But aid from the Jewish nation’s governmental and non-governmental organizations has crossed all boundaries of faith and nationality in answer to the vast needs. 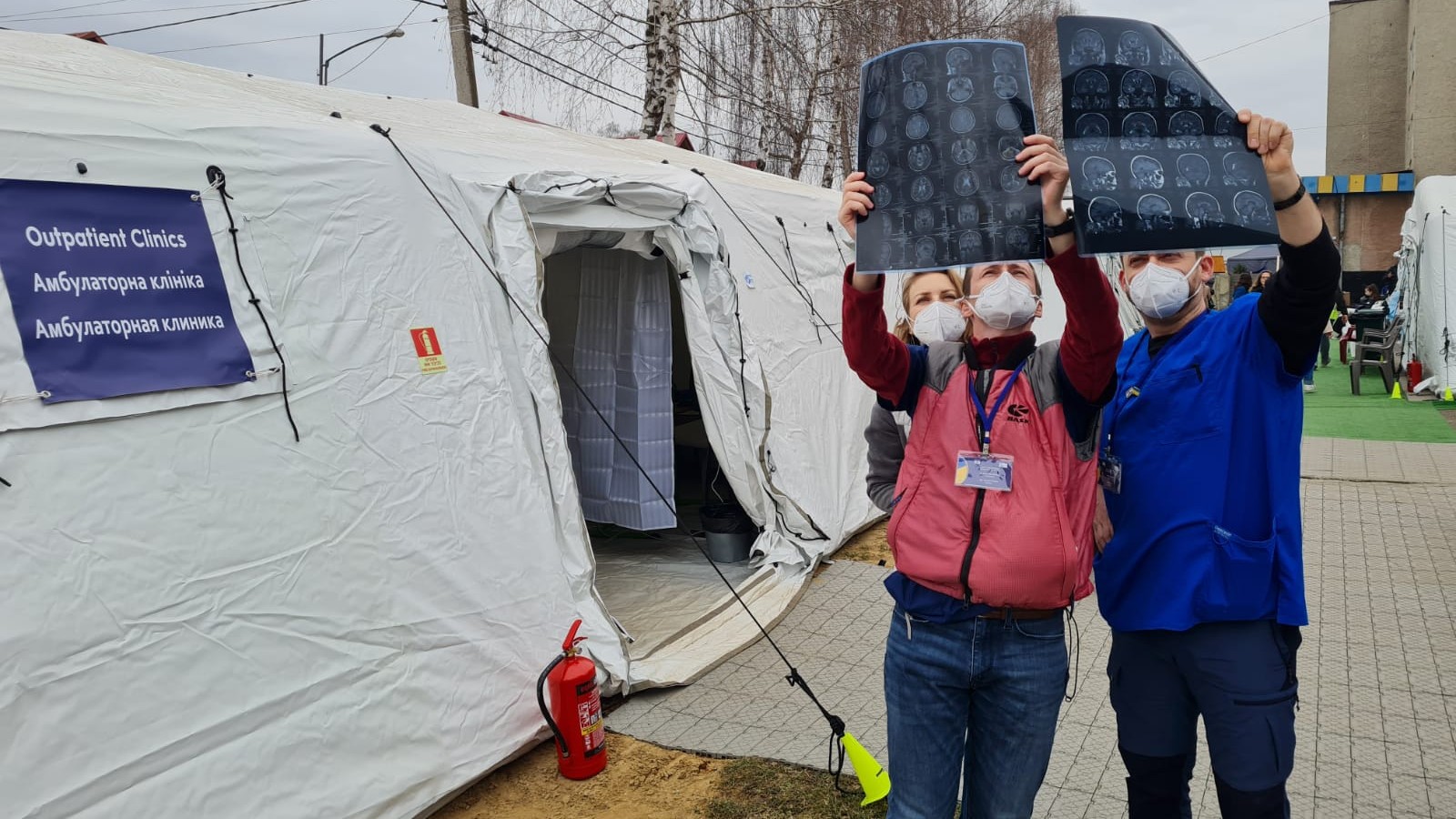 One of the most ambitious and impactful projects was the 66-bed Shining Star (Kochav Meir) field hospital set up in western Ukraine by Sheba Medical Center, Israel’s Health Ministry and the Clalit HMO. Over the course of six weeks, the hospital cared for more than 6,000 civilians and airlifted several severely Ukrainians to Israel for further treatment.