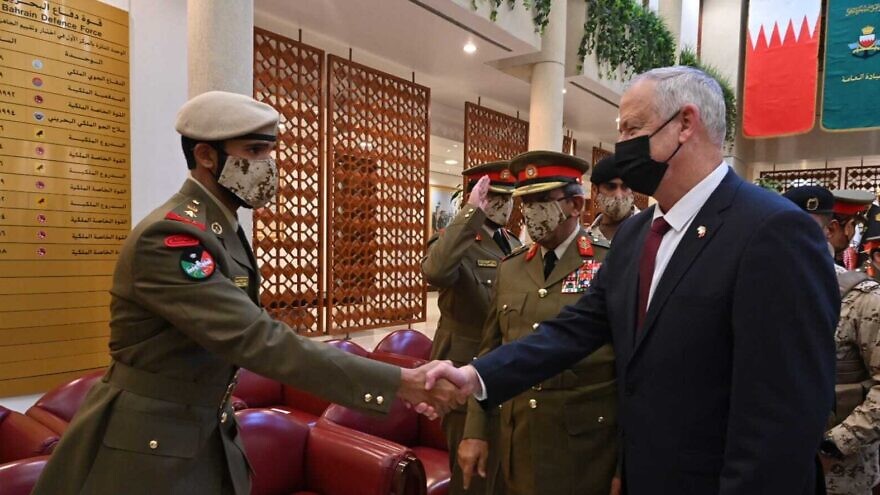 Israeli Defense Minister Benny Gantz in Bahrain, the first-ever official visit by a member of that office, in Manama to sign a Memorandum of Understanding on joint defense, Feb. 3, 2022 Credit: Ariel Hermoni/Israel's Ministry of Defense.
Spread the word.
Help JNS grow!
Share now:

(February 3, 2022 / JNS) Israeli Defense Minister Benny Gantz has signed a historic Memorandum of Understanding with his Bahraini counterpart on Thursday, Gantz’s office said in a statement.

“The MOU framework will support any future cooperation in the areas of intelligence, mil-to-mil, industrial collaboration and more,” said the statement.

“Only one year following the signing of the [Abraham] Accords, we have achieved an important defense agreement, which will contribute to the security of both countries and the stability of the region,” said Gantz.

Gantz landed in Manama, Bahrain, for the first official visit by the head of Israel’s defense establishment to the Gulf country on Wednesday.

“In the framework of the visit, the minister and his Bahraini counterpart, Minister of Defense Affairs H.E. LTG. Abdullah Bin Hassan Al Noaimi, signed a historic defense MOU between the two countries, at the Bahrain Defense Forces Headquarters in Manama, in the presence of BDF [Bahrain Defense Force] Commander in Chief H.E. Field Marshal, Shaikh Khalifa bin Ahmed Al Khalifa,” said the statement.

The signing, which represents the normalization of defense ties, comes a year after Israel and Bahrain established official relations as part of the framework of the Abraham Accords.

It followed a meeting between Gantz and Bahrain’s King Hamad bin Isa bin Salman Al Khalifa in the royal palace.

Gantz’s office said the minister “expressed his anticipation that future cooperation will strengthen the defense forces of both countries and contribute to regional security and stability in the face of emerging threats in the region, and terror groups that continue to strengthen technologically and militarily.”