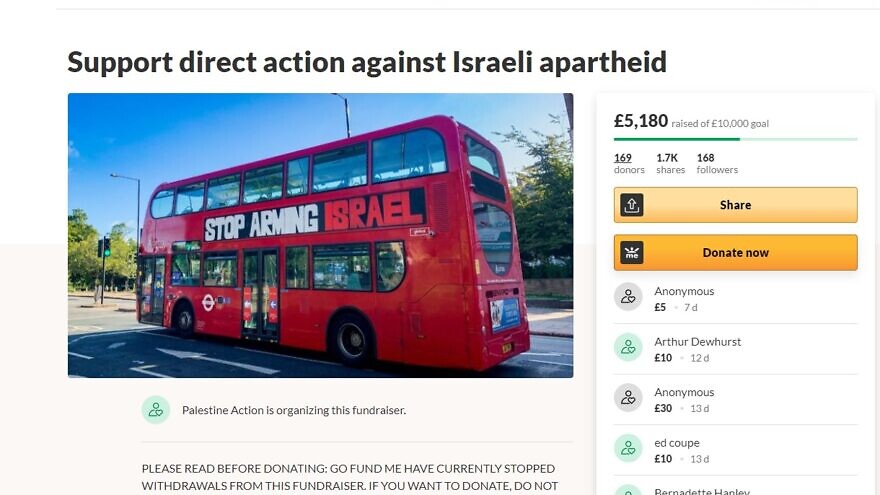 UK Lawyers for Israel (UKLFI), a legal watchdog group, said it contacted GoFundMe and notified the platform that it could be held liable as accessories to criminal activity if it permits Palestine Action to raise money via its site.

According to its GoFundMe page, Palestine Action is seeking to raise 10,000 pounds to “support direct action against Israeli apartheid.”

Palestine Action’s fundraising page stated, “Donations will be used to pay for costs associated with running our campaigns.” Such campaigns consist of criminal actions seeking to disrupt businesses of which they disapprove.

They explain that “activists have taken direct action 15 times against arms manufacturer Elbit Systems, with a view to shutting them down. Palestine Action have targeted sites in London, Oldham and on 14 September staged a dramatic 3 day occupation of Elbit’s Shenstone site, culminating in the arrest of 5 activists.”

“This action clearly constitutes aggravated trespass: see the decision of the U.K. Supreme Court in Richardson v DPP [2014] UKSC 8,” UKLFI said in a statement. “Their actions also include criminal damage. They boast in a video on their Facebook page that they will throw paint on them, smash their batteries, go there, continue to cause damage until Elbit Systems f*** off and leave this country.”

The Palestine Action fundraising page on GoFundMe now contains a message warning donors that GoFundMe has currently stopped withdrawals from their fundraiser. They say, “If you want to donate, do not do it here as we will not receive the funds.”

“Palestine Action carry out blatantly criminal actions to promote their aims, which they seek to justify on the basis of utterly false allegations,” said Jonathan Turner, chief executive of UK Lawyers for Israel. “We are pleased that GoFundMe has now disabled Palestine Action’s fundraising on their site.”