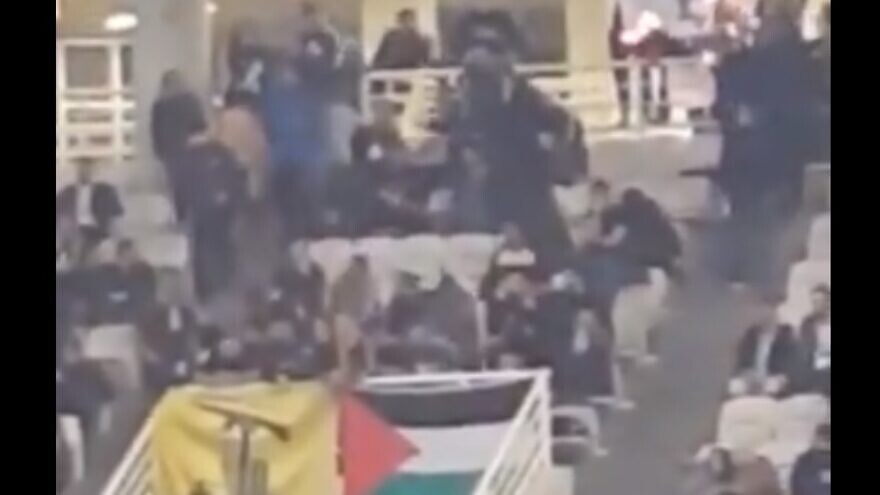 (December 20, 2019 / JNS) Fans of the Greek basketball team AEK Athens waved Hezbollah and Palestinian flags, and burned an Israeli flag during a game with the Israeli team Hapoel Jerusalem in Athens on Wednesday.

During the Gameday 9 match, part of the Basketball Champions League (BCL), the Greek fans also held up pictures of Palestinian terrorist Marwan Barghouti and shined a laser in the eyes of Israeli fans, Ynet reported.

“We had heavy security protecting us,” said Matan Ben-Harush, a Hapoel Jerusalem fan who attended the game. “We were surrounded by hundreds of police officers; we could see the fans of the other team tearing Hapoel flags before the game but there was no physical confrontation.”

Not a good look from the AEK fans burning the Israeli ???????? flag with the Hizbullah and PLO flags in full display at the @JerusalemBasket vs @aekbcgr in @BasketballCL action. pic.twitter.com/8yIjXQzCEv

Ben-Harush said that thousands of AEK fans entered the stadium during the first quarter of the game and added, “We could see the Greek fans getting closer to our seats, waving Palestinian flags and carrying pictures of Barghouti. The climax was when they started burning Israeli flags.”

Hapoel Jerusalem notified BCL of the incident and said in a statement that “there is no place for these types of acts at a sport arena. We are working with FIBA authorities on this matter. We want to acknowledge the 400 fans who accompanied the team to the game.”

BCL said it will launch disciplinary proceedings against AEK Athens.

One Hapoel fan described the incident as “horrifying,” while another Hapoel supporter said, “It’s a disgrace to basketball. There’s no place for such behavior. It was shameful seeing our flag burned; they should be mortified with themselves.”