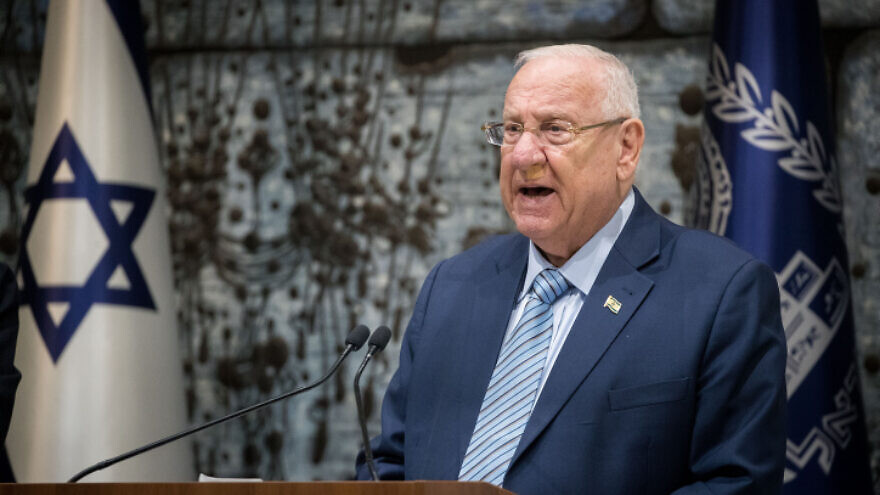 (October 13, 2020 / JNS) In his address to the opening of the 23rd Knesset’s winter session on Monday, Israeli President Reuven Rivlin launched a fierce attack on the coalition government for its failure to pass a state budget despite the health crisis facing the country.

“I am sorry to say, as the crisis deepened, so did the disagreements and the splits between us. I never imagined with what power this disunity would hit us,” said Rivlin.

Israel, he added, seemed to have lost the compass that had guided it since independence.

“We must look forward—forward to the short term, and forward to the long term. The virus is with us to stay, and we cannot deal with it if our hands are tied behind our backs,” he said.

“For more than two years, the State of Israel has been running without a budget. The education system is unable to take a clear direction on dealing with the challenge of distance learning, and many schoolchildren are being left behind. The digital gap is widening and we are in danger of losing the next generation. Do not allow the social welfare system to collapse for young people at risk without a framework, for those women facing brutal violence, for the elderly and the isolated, as poverty grows. Look after them today! Take care of them now! Businesses are failing; unemployment is high; the deficit is growing; and the medical system is groaning under the burden of the ill. Pass the budget now and give Israel’s economy the basic stability it needs!”

Due to the country’s prolonged political crisis, which saw three national elections in 12 months, the last state budget passed by the Knesset was in 2018. Under Israeli law, if a budget bill is not passed, ministries must operate with one-twelfth of the last authorized budget, so when the 2018 budget expired at the end of 2019 and no new one was passed, the country found itself struggling with unexpected financial difficulties, which were then exacerbated by the onset of the COVID-19 pandemic in April-March.

While ordinarily, the deadline for passing a budget is March 31, after the current national-unity coalition, dubbed “the coronavirus government,” was inaugurated on May 17 following the March 2 election, the deadline was extended twice, first until Aug. 25 and then until Dec. 23. Under Israeli law, the government will be dissolved automatically if a 2020 budget bill is not passed by that date.

The current government has struggled to pass a budget due to the nature of the Likud-Blue and White coalition deal, which contains a clause allowing Likud leader Benjamin Netanyahu to retain the premiership should the government fall due to a budget not being passed.

According to the terms of the coalition agreement, Blue and White leader Benny Gantz will take over the premiership from Netanyahu in November 2021, and if either party breaks up the coalition and sends the country back to elections, the leader of the other party automatically becomes interim prime minister. However, if the government falls and new elections are called due to a failure to pass a budget, Netanyahu remains prime minister until a new government is elected.

While Netanyahu has promised to pass a budget in December for the remaining eight days of 2020, Gantz is insisting that a budget for 2021 be passed at the same time, so as to eliminate the possibility of a government collapse, which would prevent him from assuming the premiership as specified by the coalition agreement.

Netanyahu, who is currently embroiled in a criminal trial on corruption charges, has been accused by his political opponents of attempting to engineer precisely this result. Under Israeli law, a prime minister may continue to serve if indicted, and even after being convicted—only being forced to resign once the appeals process has been exhausted.

Ministers are afforded no such protection, however. And, though the coalition agreement creates the position of “acting prime minister,” afforded the same protections as a prime minister, Israel’s Supreme Court can challenge the deal’s legal underpinnings.

Rivlin also called on the government to appoint a police commissioner, saying, “For more than two years, the Israel Police has functioned without a permanent appointment of its head. He is professional, thorough and without a doubt the No. 1 policeman, but the police are dealing, right now as we speak, with one of the most complex challenges in its history. Appoint a police commissioner now!”

Israel, said Rivlin, must undertake a “long, deep and systemic” process of repair.

“As we learned in the IDF, when you get lost while navigating, you go back to the starting point. It is a process that is not limited to the state of emergency. It is a process that demands difficult decisions. This is the time for attentive leadership, where the truth and the facts are its only guiding lights, brave, responsible, ethical, working for all people. Leadership that understands that connection and partnership between the different parts of this country are the guarantees for success in this national mission of ours today. I believe in this people, and I believe in our ability to prevail. Believe in yourselves, too.”

Netanyahu, who took the podium next, echoed Rivlin’s call for unity. He said Israel was “on the right path” to containing the second wave of COVID-19, but the virus could only be defeated through a united effort.

“I call on all public leaders, from the left and from the right, to act together and show solidarity. We must lower the levels of brutality and violence, which are not acceptable in any situation, and together we will lower infection and mortality rates,” he said, according to Israel Hayom.

At the start of a ministerial meeting on Sunday, Netanyahu said, “There are preliminary signs of success. However, we need another few days to evaluate this. The exit will also be gradual, responsible and cautious.”

Since the start of Israel’s current COVID-19 lockdown on Rosh Hashanah eve, morbidity rates have fallen steadily, leading to cautious optimism. Of the 44,105 COVID-19 tests conducted on Monday, 7 percent were positive, down from a peak of more than 15 percent.