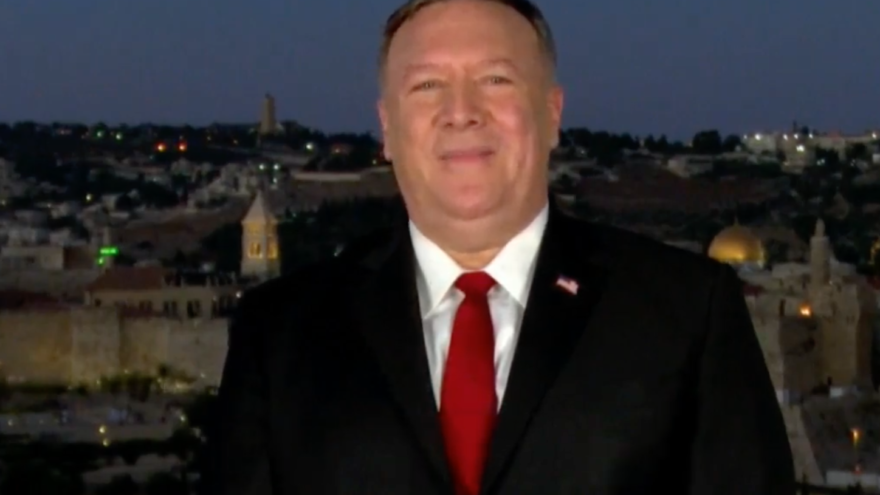 (August 26, 2020 / JNS) In a speech from Jerusalem shown at the Republican National Convention, taped on Monday and aired on Tuesday night, U.S. Secretary of State Mike Pompeo touted the Trump administration’s pro-Israel accomplishments.

“In the Middle East, when Iran threatened, the president approved a strike that killed Iranian terrorist Qassem Soleimani, the man responsible for the murder and maiming of hundreds of American soldiers and thousands of Christians across the Middle East,” he said on day two of the convention.

Soleimani, general of the Quds Force of Iran’s Islamic Revolutionary Guard Corps, was targeted in a U.S. airstrike on Jan. 3 at Baghdad International Airport.

“You will all recall that when the president took office, radical Islamic terrorists had beheaded Americans and ISIS-controlled a territory the size of Great Britain,” said Pompeo. “Today, because of the president’s determination and leadership, the ISIS caliphate is wiped out, its evil leader Abu Bakr al-Baghdadi is dead, and our brave soldiers are on their way home.”

Al-Baghdadi killed himself and two children by detonating a suicide vest during a raid of his compound by U.S. forces in northwest Syria in October 2019.

Pompeo also said, “The president exited the U.S. from the disastrous nuclear deal with Iran and squeezed the Ayatollah, Hezbollah and Hamas.”

And, he noted from the rooftop of the King David Hotel, “the president moved the U.S. embassy to this very city of God, Jerusalem, the rightful capital of the Jewish homeland.” The United States moved the embassy in May 2018, five months after recognizing Jerusalem as Israel’s capital.

Finally, he noted the recent normalization of relations between Israel and the United Arab Emirates, brokered by the United States and announced on Aug. 13.

Democrats, including Jewish ones, slammed him for breaking protocol and using his official position for a Republican campaign event, even though the U.S. State Department said it was made in a “private capacity” and that no taxpayer money was used.

Critics also pointed to exploiting Israel as a “wedge” issue and for politicizing what should, at least in theory, be a matter of bipartisan consensus.

In a letter to Pompeo’s deputy Stephen Biegun, he has requested a list of expenditures and records from Pompeo’s Middle East trip, including “receipts demonstrating that any expenses incurred by the State Department were reimbursed” by the Republican National Committee.