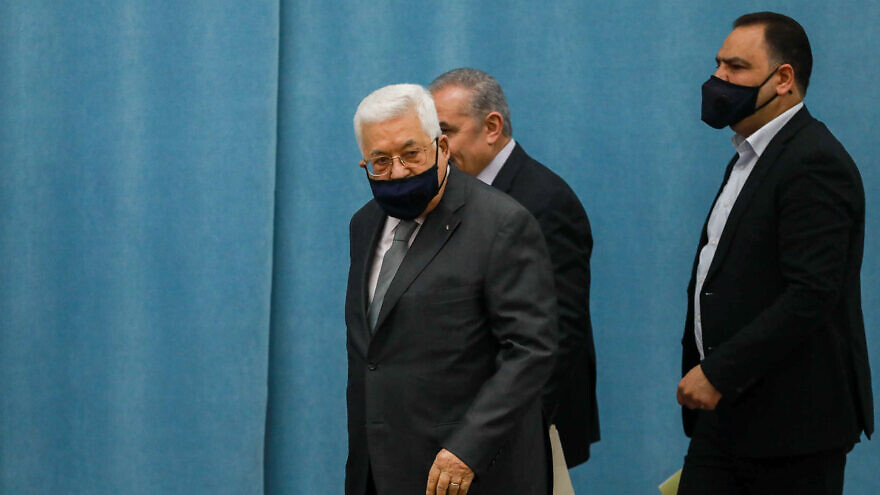 Palestinian Authority leader Mahmoud Abbas speaks during a meeting of the Palestinian leadership in Ramallah on May 7, 2020. Photo by Flash90.
Spread the word.
Help JNS grow!
Share now:

(June 2, 2022 / Israel Hayom) Animosity toward Palestinian Authority leader Mahmoud Abbas is growing not only on the Palestinian street but also in his own party, said Fatah sources this week.

The 86-year-old leader, elected in 2005, has overstayed his five-year term over the rift with Hamas, which seized control of the Gaza Strip in a military coup in 2007, effectively splitting the Palestinian Authority into two separate entities.

No presidential elections have taken place over the past 17 years, as Abbas repeatedly finds excuses for canceling them, and to date, no one has been able to successfully challenge him for the role.

Mounting criticism reached new highs this week, after Abbas announced the appointment of Hussein al-Sheikh, one of his closest aides, as secretary-general of the executive committee of the Palestine Liberation Organization, effectively placing him within reach of the presidency.

Many within Fatah challenged the move. While al-Sheikh is a senior Fatah official, there are others who are senior to him and who see themselves as potential successors to Abbas, most notably Fatah Secretary-General Jibril Rajoub.

The outrage within Fatah’s ranks has also been fueled by the defeat handed to the faction by Hamas in last week’s Birzeit University student council elections. The latter brought about a series of protest resignations among Fatah district chiefs, including that of head of the Fatah movement in Ramallah and Al-Bireh, Muwafaq Suhwail.

Fatah officials have expressed anger about “paying the price” for Abbas’s mistakes.

Many in the Palestinian leadership say the continued security coordination with Israel is an ineffective policy that undermines Fatah’s position on the Palestinian street. There is also a growing push to replace P.A. Prime Minister Mohammad Shtayyeh over corruption allegations.

“After Hamas failed to respond to the [Jerusalem flag] march and Al-Aqsa [mosque] became a ‘synagogue,’ a historic move must be made to prove that we are the Palestinian leadership,” one official said in the meeting, where he and others urged Abbas to end to security coordination with Israel.

It is believed that the hardline approach Fatah officials expressed in the meeting pushed Abbas to tell U.S. Secretary of State Antony Blinken on Tuesday that he is weighing various means to pressure Israel, the United States and international figures to renew peace talks, including implementing a decision reached by the Fatah Central Committee earlier this year to rescind Palestinian recognition of Israel.