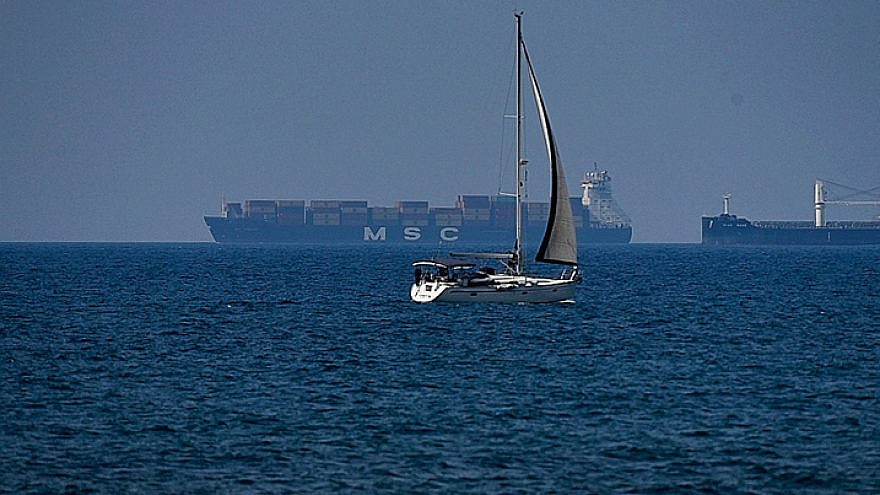 A cargo ship is seen off the coast of the northern Israeli city of Haifa on June 9, 2019. Photo by Meir Vaknin/Flash90
Republish this article
1059 WORDS
Spread the word.
Help JNS grow!
Share now:

(November 30, 2020 / JNS) In the past decade, the eastern Mediterranean Sea has emerged as an important economic and strategic route for resource extraction and transportation, as well as an area of increased competition between major regional and global maritime powers vying for influence. Once only concerned about land threats, Israel has also turned its attention to the sea. The Jewish state now has significant natural-gas fields in the eastern Mediterranean and recently commissioned its most advanced warship ever to patrol these waters and protect its interests.

At the same time, as this arena now features a stronger U.S., Russian and Turkish naval presence, Chinese-owned ports and European Union maritime infrastructure, the question of how competing interests in the Mediterranean Sea play out has become paramount.

A panel co-organized by the Konrad Adenauer Stiftung Israel and the Haifa Maritime Policy & Strategy Research Center at the University of Haifa brought together security and naval experts from around the world to discuss U.S., E.U., Chinese, Russian and Turkish interests in expanding their naval presence in the Mediterranean Sea, and what the future holds for the region.

Asli Aydıntaşbaş, a senior policy fellow at the European Council on Foreign Relations and a columnist for The Washington Post, said she does not see Turkish President Recep Tayyip Erdoğan’s efforts to exert influence in the region as Islamist or neo-Ottoman, but rather as pride in Turkish nationalism.

She said that Turkey is “clearly a resurgent power and not sure of its commitments to the Trans-Atlantic alliance, and is looking at Asia and Russia as alternatives if for nothing to complement its relationship with the West.”

“Erdoğan sees it as his calling in life to see Turkey emerge as a great power and emerging power in the 21st century,” she added.

As a result, Turkey has increased tensions with its old rival Greece in the eastern Mediterranean. In particular, the growing cooperation between Cyprus, Egypt, Greece and Israel as part of the “East Med Bloc” has further fueled Turkey’s ambitions in the region, especially with its involvement in Libya.

Aydıntaşbaş said Turkey has moved into Libya, Syria and the Caucasus to fill the vacuum left by Western powers due to “disinterest and detachment” from the region.

According to Aydıntaşbaş, Turkey has “reached a crossroads” in terms of external pressures with the prospect of E.U. sanctions in December over the purchase of Russian S-400 air-defense systems. “This may force Turkey to make decisions on its foreign policy,” she said. “The Turkish economy is fragile, and it cannot sever ties with western allies. It is crunch-time and decision-making time.”

‘All about standing up to the U.S.’

Meanwhile, Russia has also staked out its stronger presence in the eastern Mediterranean. During the Cold War, the Soviet Union established a naval base in Tartus, Syria. As part of its involvement in the Syrian Civil War, Russian signed an agreement in 2017 to expand and use its naval facility at Tartus free-of-charge and enjoy sovereignty jurisdiction over the base.

Konstantin von Eggert, a journalist, political analyst and communications consultant, said Russia’s universal foreign policy, including the eastern Mediterranean, is “all about standing up to the U.S.”

Von Eggert said Russian President Vladimir Putin is concerned domestically about the survival of his regime. He viewed the Obama administration’s policies as “weak and indecisive—all talk and no action.”

Moscow’s support for leaders in Venezuela and Syria is “all about sovereignty,” he said, “a national government being able to do what it wants. And [Putin’s] initiatives around the globe are about creating problems for the West, mainly for the United States.”

Von Eggert said that he believes Putin sees Erdoğan as “a useful tool for undermining NATO unity, for sowing seeds of conflict in the Western community and a useful partner for the Russian state companies. Putin thinks he can instrumentalize Erdogan in the Eastern Mediterranean.”

He also noted that Erdoğan “is very much like Putin. They are both similar.”

However, added Von Eggert, Putin “is the guy who put too much on his plate at the buffet.”

He “will have to prioritize” and “look closer to home to concentrate his efforts,” said Von Eggert. “We will probably see Putin’s active disengagement from Syria and come to some understanding in Libya to cut his losses.”

‘Energy a giant part of the Russian economy’

He questioned whether the incoming U.S. administration will return to the Obama administration’s policies “or will seriously assess the situation today and devise strategies based on repairing current realities rather than vindicating their past arguments.”

“The appointments announced so far on the national security area by [U.S. President-elect Joe] Biden have been somewhat reassuring,” he said.

According to Feith, five key challenges for America exist in the eastern Mediterranean: the great power interest in the Middle East, Iran, Syria, Turkey and Arab-Israeli diplomacy.

He said Russia is investing in air and naval facilities in Syria, and emphasized that it is modernizing its conventional and nuclear forces by “investing substantially quantitatively and qualitatively.”

According to Feith, Russia has multiple interests in the region and is promoting arms sales by displaying capabilities through attacks on Syria from various theaters such as the Caspian Sea.

“Russia also has an interest in policies made in the Middle East with regard to energy,” he said. “It has interests in world energy prices since energy is a giant part of the Russian economy.”

China currently owns or partly owns 20 ports in the eastern Mediterranean, he explained, and if China has many unmovable assets in this region, “we may see more Chinese naval ships in the region.”

“Its main interest,” he said, “is trade to Europe; the export of goods and services from China, such as the Belt and Road Initiative; and national security.”

There is also much talk of a land bridge across the Gulf states through Israel to the Mediterranean Sea, noted Gonen, which falls under the classic Belt and Road Initiative, “so we could see China involved in the project.”