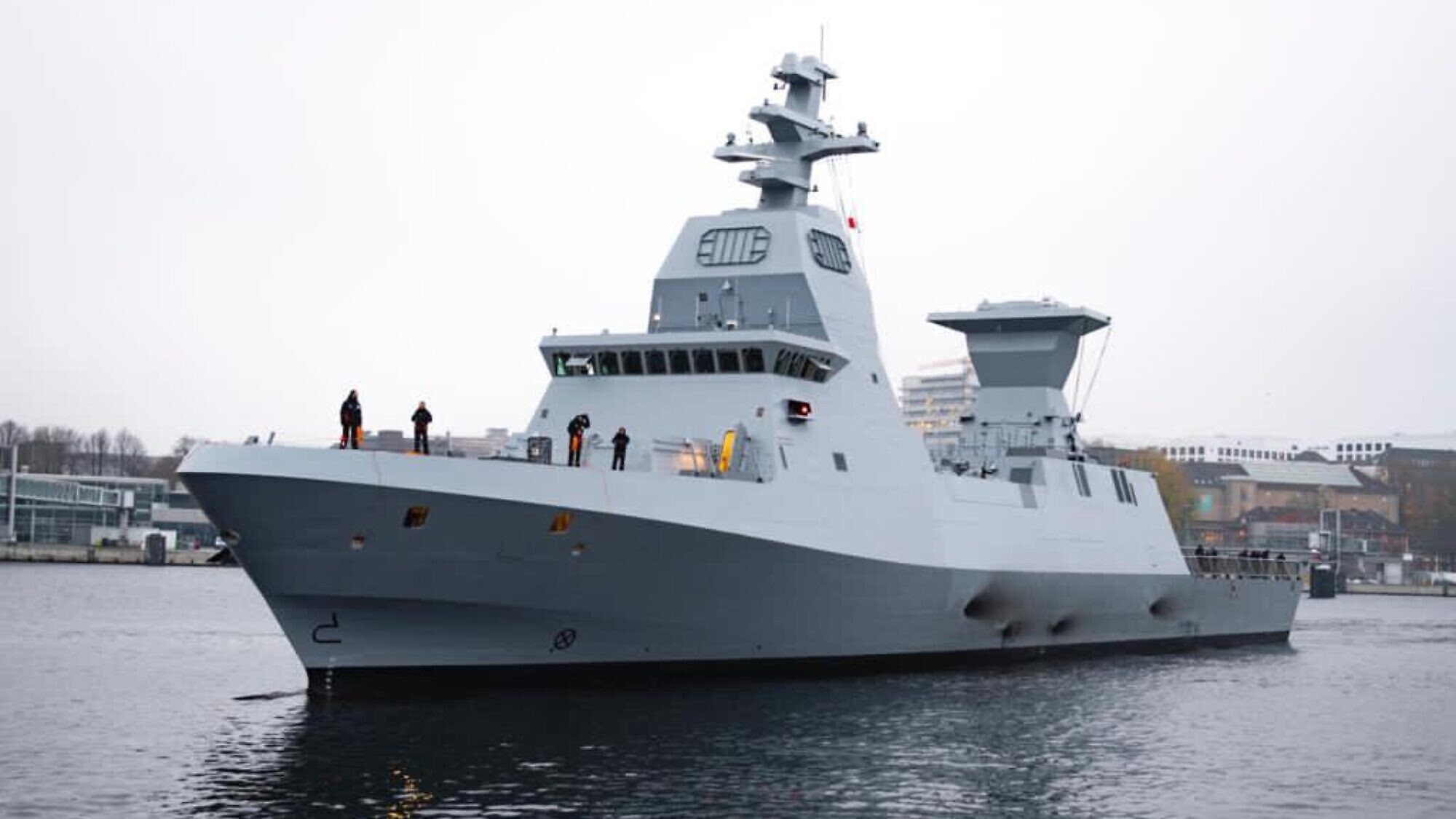 (November 23, 2020 / JNS) The first of Israel’s new Sa’ar 6-class warships, the INS Magen, is making its way from Germany to Israel, due to arrive at Haifa naval base at the start of December. Its arrival signifies a new stage in the evolution of the Israeli Navy both in its ability to defend critical national infrastructure and in its attack capabilities.

Israel is due to receive four Sa’ar 6 state-of-the-art Sa’ar 6 ships by November 2021 with each platform costing $400 million. The German government is footing one-third of the cost per ship.

The INS Magen held its Commissioning and Flag Raising Ceremony on Nov. 11, during which the German flag was exchanged for the Israeli flag. The ceremony was led by Vice Admiral Eliyahu Sharvit, commander of the Israeli Navy, and additional senior defense officials.

The corvettes are being produced by German shipyard Thyssenkrupp Marine Systems, which has worked closely with the Israeli Navy in terms of ship design.

Only after arriving in Israel will the ships’ mostly Israeli-made combat systems be installed before they become fully operational.

“The INS Magen—the first of four [new] corvettes of the Israeli Navy—will deal with future challenges of the naval theater in the most optimal way. The INS Magen, as well as the other three warships, is a great, optimal and versatile tool to defend Israel’s strategic assets in our economic waters,” Sharvit said at the ceremony at Kiel, Germany. “This is exactly the reason that we are here today, excited to hoist the Israeli flag to the top of the INS Magen’s mast, the symbol of an independent, sovereign, confident and prosperous country. The INS Magen will be armed with the best offensive and defensive systems with the most advanced technological military combat systems, the majority of them made in Israel.” 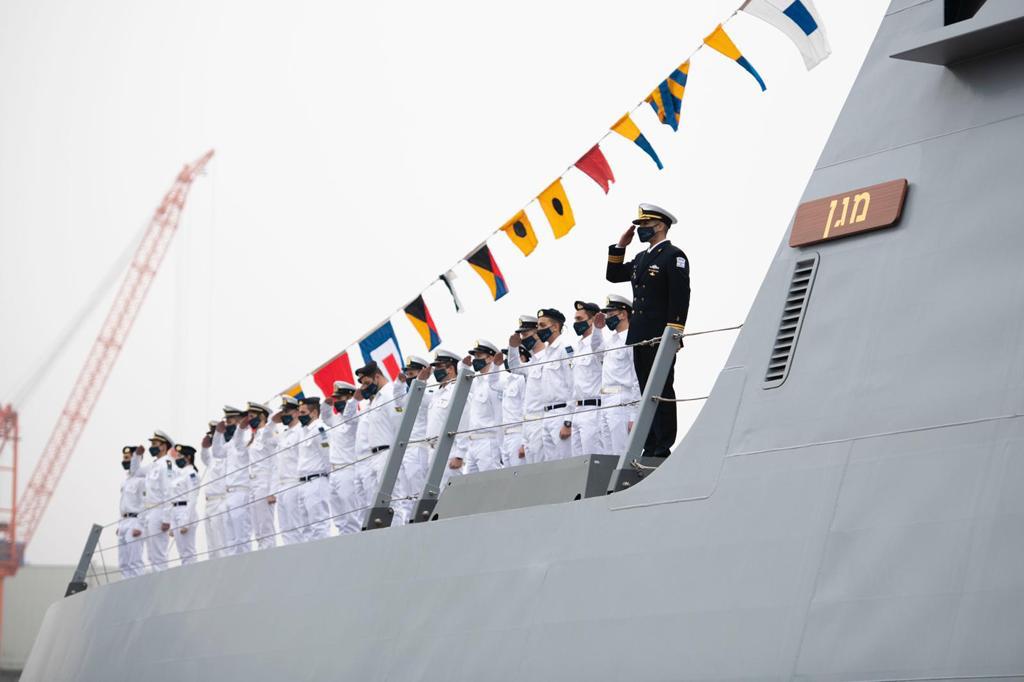 The corvettes are being produced by German shipyard Thyssenkrupp Marine Systems, which has worked closely with the Israeli Navy in terms of ship design. Credit: IDF Spokesperson’s Unit.

Their arrival reflects a deep change that is occurring regarding the role of the sea in Israel’s national security.

The ships represent a major change in the navy’s combat doctrine. In the 1973 Yom Kippur War, the navy fought a historic battle with Syrian vessels at the Battle of Latakia, representing the first time in naval warfare that missiles were used.

Back then, the navy’s doctrine was to use small, rapid vessels that carried short-range missiles and guns. The doctrine called for moving these towards enemy ships at full speed and getting into missile range before firing and sinking the targets.

Yet Israel’s enemies had longer-range missiles onboard—a fact that forced the Israeli Navy to employ Electronic Warfare and chaff to protect its ships. The Latakia battle ended up being a decisive victory for the Israel Navy, and the doctrine proved itself.

That event shaped the navy’s philosophy on how to build up naval force for the next 30 years. “We invested in ships that have defense as well as attack capabilities. But they were built for blue water (open sea) ship-to-ship combat,” a naval official stated in recent weeks. 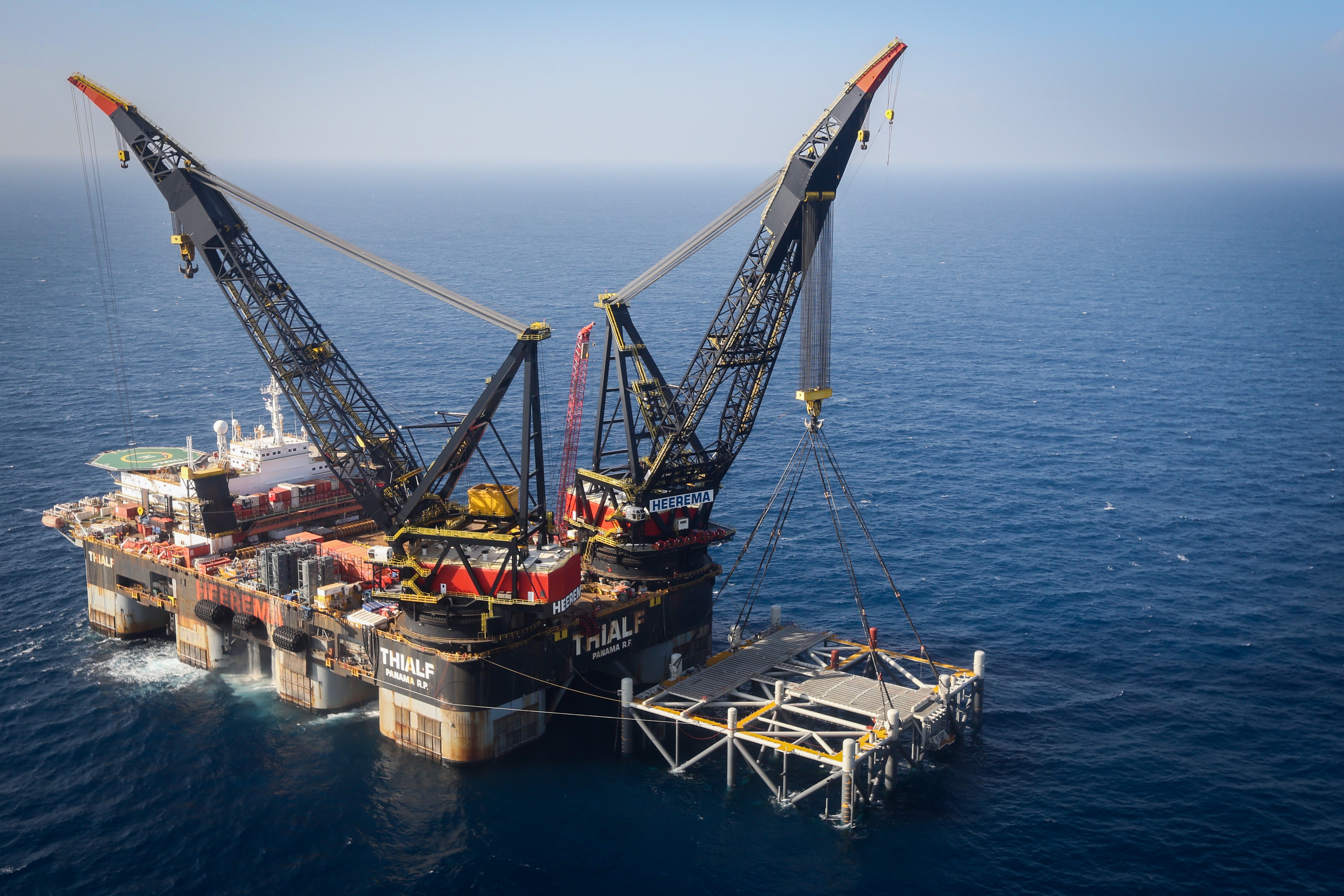 The Israeli Leviathan gas-processing rig near the city of Caesarea, on Jan. 31, 2019. Photo: Marc Israel Sellem/POOL.

In the 2006 Second Lebanon War, an Israeli Naval Sa’ar 5-class missile ship, the INS Hanit, was struck by a Hezbollah land-to-sea missile, and the navy realized that it was time for a new doctrine.

“What has changed is basically an arms race,” said the navy source. “We understood that Hezbollah and other terrorist organizations have achieved precision-guided missile or rocket capabilities in order to hit targets in Israel on land as well as at sea.” The evolution of surface-to-surface missiles meant that land-to-sea missiles had also become more deadly.

Hamas in the Gaza Strip has built naval commando cells designed to raid the Israeli coastline and is digging naval tunnels to give them covert access to the sea.

“Our enemies are building a sophisticated array of land-to-sea missiles,” said the source.

According to media reports, Hezbollah is in possession of the supersonic Yakhont anti-ship cruise missile, which is likely the fastest and most advanced available today, and has a range of 300 kilometers.

Meanwhile, the presence of great powers at sea has only grown in the region.

The result, explained the official, is the creation of a new naval doctrine called “brown water warfare,” meaning the capability of fighting very near to the shore, and “having the capabilities to defeat our enemies on land.”

The value of these capabilities receives an added significance when Israel’s position as a virtual island nation is taken into consideration. Almost all of the imported goods arrive via sea lanes. Some 50 percent of Israel’s freshwater comes from desalinated seawater.

Some 90 percent of wheat is imported via ships, and 300,000 new vehicles arrive on cargo ships to Israel every year. The list of raw materials that arrives via ports is lengthy.

And 70 percent of Israel’s electricity consumption is today based on the liquified natural gas that arrives at Israel’s power plants from the offshore rigs.

“We understood the only way to achieve protection of gas rigs is by using ships,” said the naval source.

That’s where the Sa’ar 6 ships come in. The ships will be fitted with advanced air-defense systems. Each one will have Rafael’s C-Dome naval Iron Dome, a version of the famous land-based Iron Dome system, as well as Israel Aerospace Industries Barak 8 air- and missile-defense system.

A powerful radar, made by IAI-Elta, dubbed Adir (“mighty”), will control all of the onboard combat systems. It is able to detect and track a whole range of airborne threats. 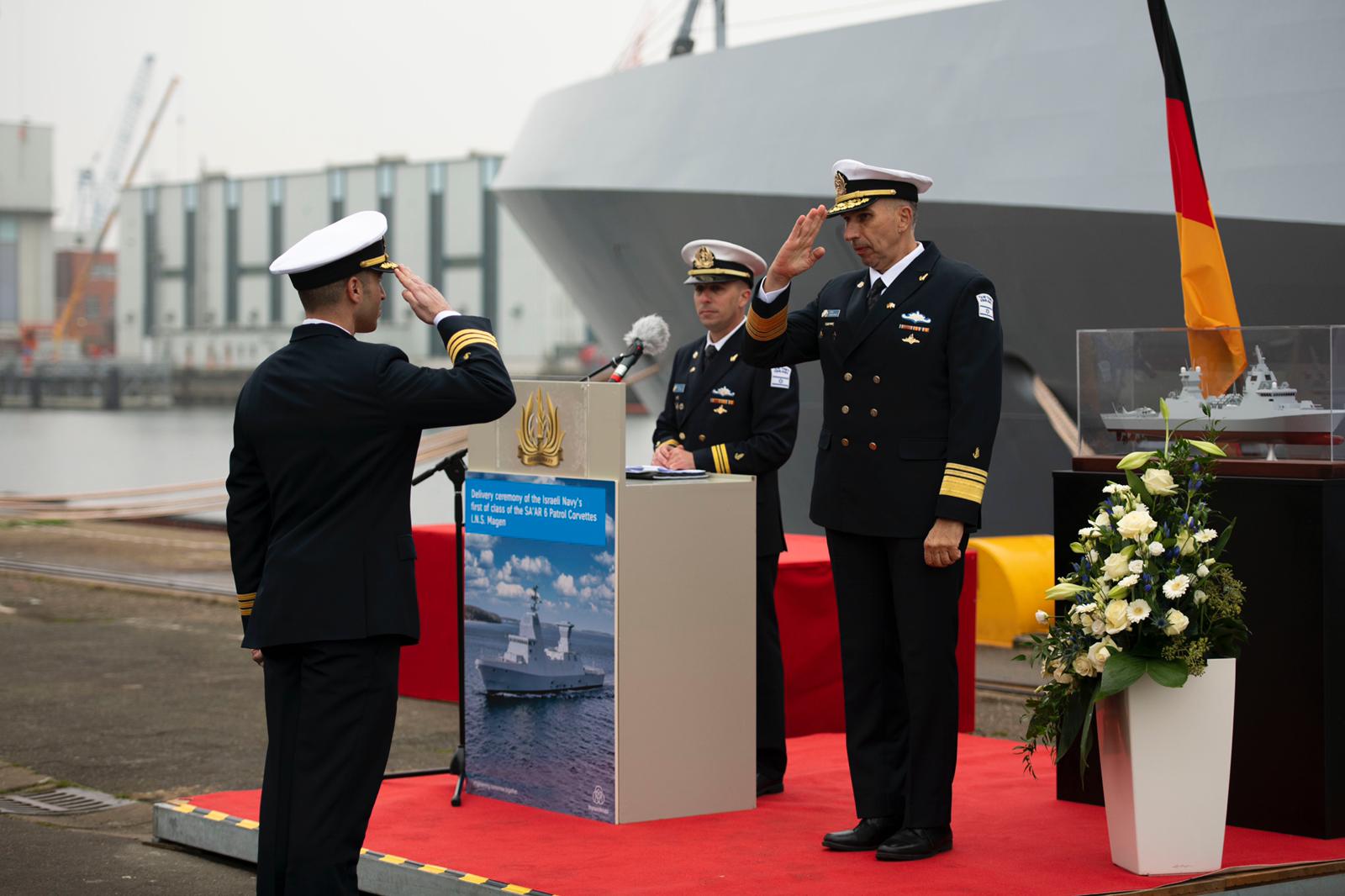 The INS Magen held its Commissioning and Flag Raising Ceremony on Nov. 11, during which the German flag was exchanged for the Israeli flag. Credit: IDF Spokesperson’s Unit.

“The problem with gas rigs is that only takes one hit to get the potential damage that you want to achieve. We as a navy cannot allow any missiles, ballistic threats, cruise missiles or unmanned aerial vehicles (UAVs) to get through us and strike any gas rig,” said the official. “It’s like building an iron wall.”

Electronic Warfare systems on board the ships will also act to disrupt enemy missiles.

Meanwhile, the ships will be connected to a national air situation picture, meaning that they can share target data with the air force.

Altogether, the source said, these capabilities will enable the navy to defend Israel’s economic waters, secure Israeli sea routes and conduct other assignments.

The close cooperation between the Israel Navy and the Thyssenkrupp German ship makers was a key element in designing the ships, according to the official. “That collaboration is very good. We received a vessel that is tailor-made to our needs,” he said. This includes a stealthy design that lets the ships evade radar detection.

Ultimately, the navy believes that flexibility is key to managing a changing environment with new threats. “This boat should handle the threats, and it should do that for the next 40 years,” said another official. “What we know now won’t be relevant in five years.”