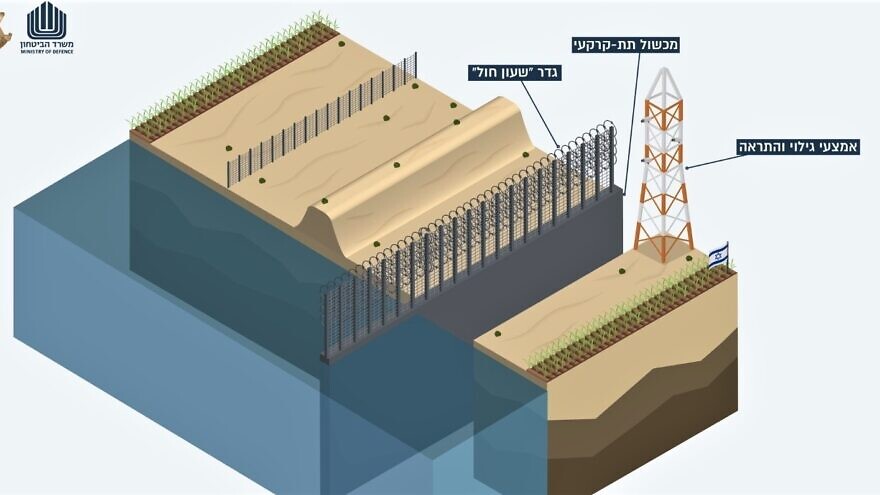 (December 7, 2021 / JNS) After three-and-a-half years of construction, the Israeli Ministry of Defense announced on Tuesday the completion of a 65-kilometer (40-mile) underground and overground border barrier with the Gaza Strip.

The barrier “includes an underground component with sensors, an above-ground fence, a naval barrier, radar systems and command-and-control rooms to prevent infiltrations from the Gaza Strip into Israeli territory,” the Defense Ministry said in a statement.

Israeli Defense Minister Benny Gantz said “the barrier, which is an innovative and technologically advanced project, deprives Hamas of one of the capabilities it tried to develop and places an ‘iron wall,’ sensors and concrete between the terror organization and the residents of Israel’s south. This barrier will provide Israeli citizens a sense of security and will enable this beautiful region to continue developing and flourishing.”

He described routine life in southern Israel as “our victory,” calling such routine “the greatest threat to terrorist organizations.”

“We will continue to maintain our readiness to thwart any attempt to harm Israeli citizens with an emphasis on rocket attacks from Gaza. We will also prevent the transfer of Iranian know-how and technology to Gaza, and will continue thwarting any attempt by Hamas to operate its affiliates in Judea and Samaria or anywhere in Israel,” he said. “Their attempts have failed time and again.”

It took more than 1,200 workers to build it, in addition to six concrete-producing plants that were established along the border with Gaza.

The Defense Ministry and the Israel Defense Forces planned and built the barrier together.