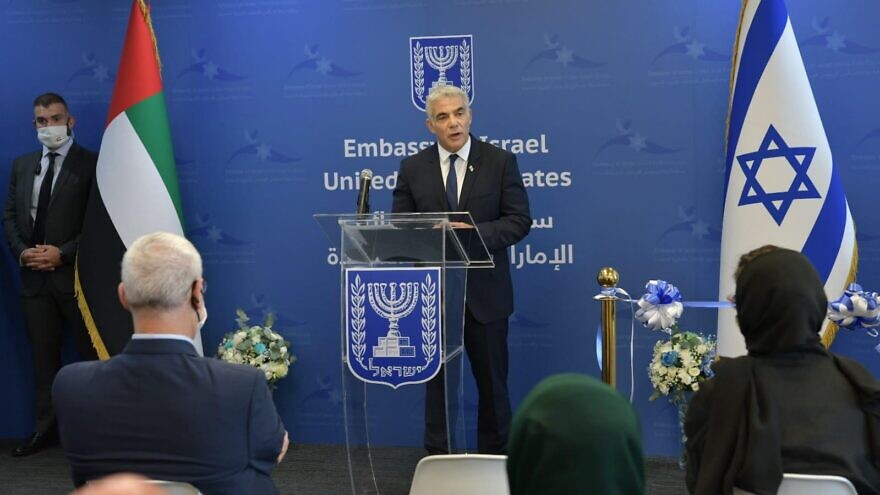 (June 29, 2021 / JNS) Israeli Foreign Minister Yair Lapid flew to the United Arab Emirates on Tuesday in a historic first official visit by an Israeli minister to the Gulf State.

“What we are doing here today isn’t the end of the road, it’s the beginning. From here, from this place, we are setting out on the road,” Lapid said at a ceremony inaugurating Israel’s Embassy in Abu Dhabi.

“Israel wants peace with its neighbors. With all its neighbors,” the foreign minister said. “We aren’t going anywhere. The Middle East is our home. We’re here to stay. We call on all the countries of the region to recognize that.”

The UAE, along with Bahrain, signed the Abraham Accords, a normalization agreement with Israel, in September 2020. It was the first agreement signed between Israel and an Arab state in 26 years, the last one in 1994 with Jordan. Later Morocco and Sudan also joined the U.S.-brokered deals.

Speaking after Lapid, UAE Culture and Knowledge Development Minister Noura Al Kaabi said that “it is essential that we prepare ourselves and our children toward a new world.”

Lapid was greeted in Abu Dhabi, UAE’s capital, by Ahmed Al Sayegh, UAE’s Minister of State and Chairman of Abu Dhabi Global Market, the international financial center in the capital.

During his visit, Lapid will also attend the inaguration of Israel’s consulate in Dubai. He will also visit Israel’s pavilion at the Dubai Expo 2020 trade fair.