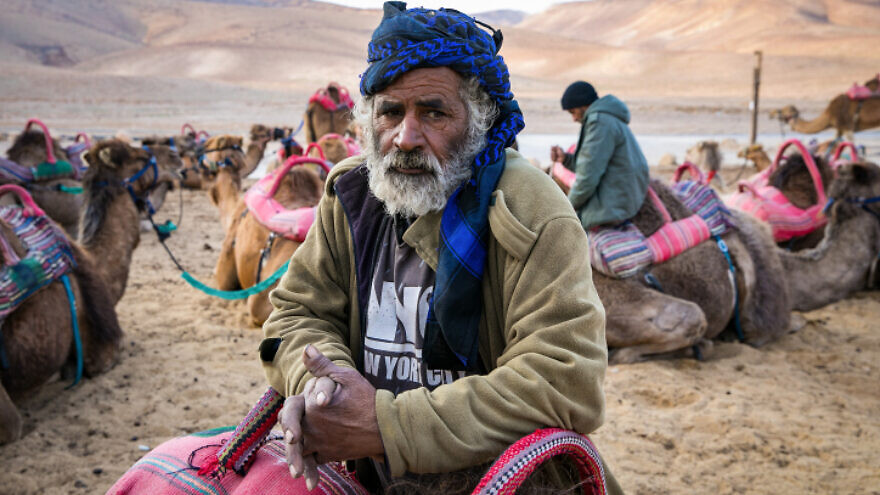 (November 3, 2020 / JNS) An Israeli Bedouin resident of the Negev desert was sentenced to seven months in prison this past week by the Beersheva Magistrates Court for practicing polygamy. The sentencing was welcomed by the Israeli NGO Regavim, whose mission is to preserve Israel’s resources, and which has been studying and monitoring the practice of polygamy in the Bedouin sector for years.

Naomi Kahn, director of Regavim’s International Division, told JNS that while polygamy has been illegal in Israel since 1951, the phenomenon has been ignored for decades “because it’s a delicate political issue, and due to cowardice, plain and simple.”

However, she said that in the past few years, things have started to change. Kahn explained that this week’s sentencing was the culmination of the work started by former Justice Minister (and current Knesset member) Ayelet Shaked, using Regavim’s research, who in 2018 was tasked by Israeli Prime Minister Benjamin Netanyahu with establishing a ministerial committee to work on this hugely problematic societal issue.

Shaked took to Facebook this week in response to the sentencing, explaining that under her watch “the Attorney General issued a directive to start enforcing [penalties for] the crime and indictments were filed.” She added that her committee had “published a memorandum of laws to cut benefits [for those who practice polygamy] along with a series of actions to empower the Bedouin women. … This ruling proves that some of our work bore fruit. Seven actual months of imprisonment.”

Kahn explained that the issue isn’t just the morality of taking multiple partners, but that polygamy also constitutes “a social and economic time bomb.”

The victims of the “criminal neglect” on this issue, she added, “are the Bedouin themselves—specifically, the women and children living in unbearable conditions, where the women have no voice and suffer from abuse and neglect.”

At the same time, many of the Bedouin men are marrying wives she says are being “imported” from the Palestinian Authority and the Gaza Strip, adding to the “radicalization of the community, which is the natural outgrowth of the education these mothers are giving their children.” Kahn said that the children from these marriages grow up hating Israel, don’t serve in the Israeli military or perform national service. “There is homegrown Bedouin terrorism, which we haven’t seen in the past,” she said.

In addition, she said that Israeli taxpayers are footing the bill for these polygamous families since “Israel’s National Insurance Institute hands out social welfare payments, knowing full well that they have created what are called ‘enlarged families,’ with stipends for every wife and child, as many of the women are listed as ‘single mothers,’ ” while in reality they are married. In fact, Kahn said, “70 percent of all Bedouin income in the Negev comes from government handouts.”

One of the tricks used by those seeking multiple wives while still being able to take advantage of government funding is phony divorces. In many cases, according to Kahn, a husband will carry out what is known as a “minor divorce,” in a sharia [Islamic religious] court, which becomes accepted as a full divorce by Israeli courts.

However, the reality of this custom is that the husband may take additional wives as this type of religious gesture in Islam isn’t considered a full-fledged breakup.

‘Where are all these women coming from?’

Meir Deutsch, director general of Regavim, told JNS, “Polygamy goes against everything we as a society should stand for: It is a backward, antidemocratic and abusive practice fueled by human trafficking. It exploits the most vulnerable members of society and creates a dark subculture of disenfranchised, neglected and radicalized Israeli citizens who are pawns in a scheme to milk the state for money, land and leverage. The government owes it to every one of us, but first and foremost to the Bedouin citizens of Israel, to put an end to this regressive and corrupting practice immediately.”

Deutsch said that the recent sentencing, along with a 2019 case in which another man convicted of polygamy was sentenced to community service, but who was then sent to jail after a District Court overturned the ruling, “are an important step in the right direction, but so much more must be done before this blemish on the face of the State of Israel is erased.”

Yossi Ben Baruch, a researcher with the Lavi NGO, which fights for civil rights and transparent leadership in Israel, agreed that much more needs to be done on the issue of polygamy.  He told JNS that he is currently investigating the money trail surrounding how women from P.A.-controlled areas are essentially being “sold” as wives to Bedouin men.

“Where are all these women coming from?” he asked. He said a recent query to Israel’s Police on the issue had not yielded results.

Referring to the recent arrests, he said that “it isn’t enough.”

“It can’t just be a show for the press. The police and the government have to deal with the groups in the P.A. behind these activities, and the National Insurance Institute has to stop with the payments. This [polygamy] is an enormous problem that has to be shut down at its roots.”