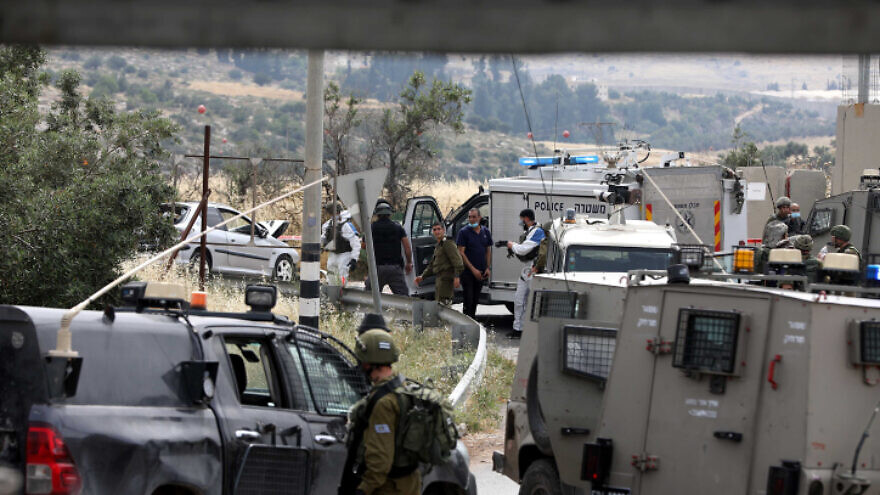 Israeli soldiers at the scene of what the Israeli military says was a deliberate car-ramming attack near the Hebron Hills in Judea and Samaria on May 14, 2020. Photo by Wisam Hashlamoun/Flash90.
Spread the word.
Help JNS grow!
Share now:

(June 25, 2020 / JNS) The Israel Police released video footage on Wednesday of a Palestinian vehicle ramming into a West Bank checkpoint and security forces shooting and killing the driver, identified as Ahmed Erekat.

Israel released the surveillance footage of the attack, which took place on Tuesday, to counter claims by the terrorist’s family that he would not have carried out such an attack, according to the AP.

Even after the release of the video, which showed the vehicle turn suddenly, accelerate and ram into the checkpoint booth, his family members expressed confusion.

“We know Ahmed,” said Hiba Erakat, the perpetrator’s cousin. “He had no reason to commit suicide. He was on good terms with his fiancée, his family and people in his town. We are wondering if he had any personal problems and wanted to escape.”

Another cousin tweeted that it might have been an accident.

The attacker is a relative of senior Palestinian official Saeb Erekat, who expressed doubt regarding Israel’s account of the incident, tweeting on Wednesday morning: “The car was going at less [than] 5 kilometers an hour. This is not the speed needed for an attack. We demand an int. Invistagotoon [sic].”

Tensions have been high in recent weeks in parts of Judea and Samaria due to the Israeli government’s stated intention to apply its sovereignty to parts of the territories beginning in July.