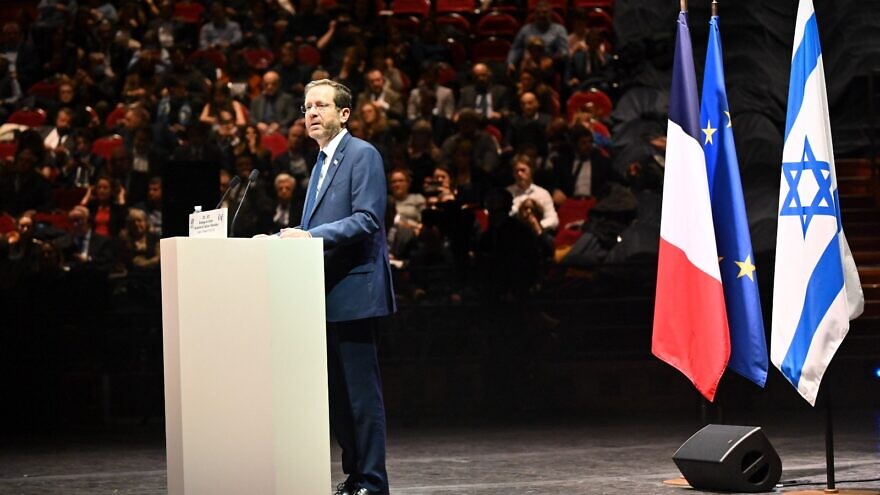 (March 21, 2022 / JNS) “The family of nations must stand together and not let Iran pour more fuel on the flames of hatred—before it is too late,” Israeli President Isaac Herzog told a crowd in Toulouse, France on Sunday.

“The State of Israel will not accept any attempt to dispute or threaten our basic right to exist, as a nation in our homeland,” he said.

Herzog was speaking at a memorial marking a decade since the 2012 Toulouse and Montauban terror attacks, which killed seven people, including three children.

He also used the platform to address growing rates of anti-Semitism.

“Brothers and sisters, we stand here today in order to say clearly: terror will not defeat us,” Herzog stressed. “Our mutual responsibility, our spirit, and our glorious heritage—these, no one can suppress.”

He said that anyone “searching for justification” for hate will not find it.

“There will never be any reason or justification for acts of terror, wherever they may be perpetrated,” he said.

The 2012 attacks, he said, had been motivated by “pure and bottomless hatred, motivated by an extremist and distorted version of Islam, which never misses an opportunity to attack Jews, and as we have seen, unfortunately, also Muslims and Christians.”

He then called on the French community to work at all levels—political, judicial and educational—to condemn racism and anti-Semitism.

Earlier in the day, the president held a working meeting with Macron.