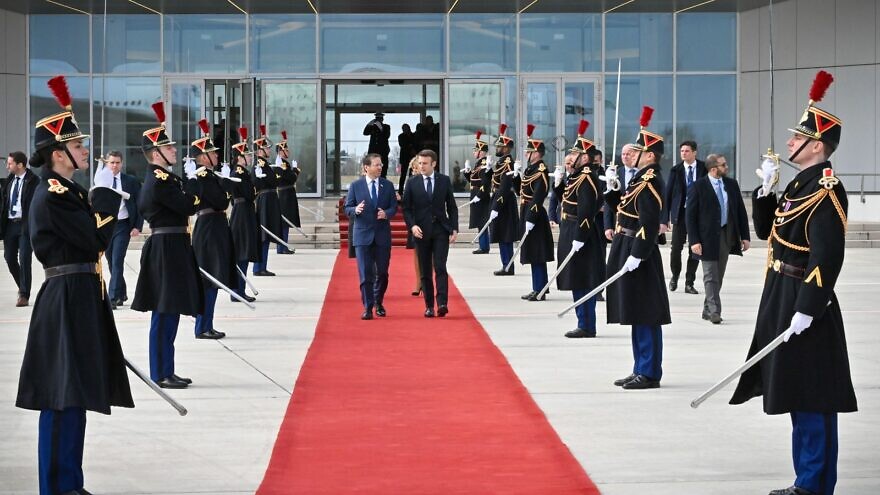 Israeli President Isaac Herzog began his state visit to France on Monday with a diplomatic working meeting with French President Emmanuel Macron, according to a statement from Herzog’s office.

At the start of their meeting, Herzog told Macron about the late Rabbi Chaim Kanievsky, who died at his Bnei Brak home on Friday and who was laid to rest on Sunday in a funeral attended by hundreds of thousands of Israelis.

The Israeli president, together with First Lady Michal Herzog, are in France to participate in a memorial ceremony marking 10 years since the deadly terror attack at a Jewish day school in Toulouse. Both Herzog and Macron are expected to speak at the event.

In addition to the memorial ceremony and his meeting with Macron, Herzog is scheduled to meet with Yaacov and Yaffa Monsonego, who lost their eight-year-old daughter Myriam in the terror attack at the Ozar Torah Jewish school (now called Ohr Torah).

Herzog was invited to the ceremony last year by Macron during a meeting he held with Israeli Foreign Minister Yair Lapid, according to the president’s office.

During their meeting on Sunday, Herzog thanked Macron for the warm welcome and stressed the importance of the visit to mark 10 years since the terrible terror attack, according to Herzog’s office.