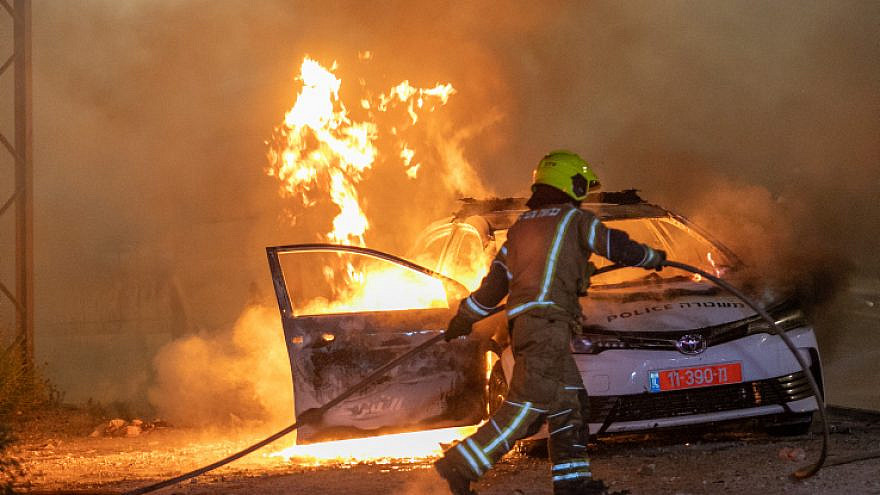 (September 11, 2022 / JNS) Israel’s planned national guard force, which is being created in response to the violence in mixed Arab-Jewish areas during the country’s May 2021 war with Hamas in Gaza, falls far short of what will be required should such a scenario occur again, a former senior police officer told JNS.

“The addition of extra police officers for the national guard in the format that was decided on is a drop in the ocean,” said Maj. Gen. Alon Levavi, a senior research fellow at the MirYam Institute and a former Israel Police deputy commissioner. “The state needs to allocate much greater resources to police stations in mixed [Arab-Jewish] cities and in Arab cities,” he added.

Police stations provide the first response to these kinds of emergencies, and have the ability to prevent the next incident, said Levavi, including the ability to “extinguish the flames when they are still small.”

The speed and intensity of the police response will determine the state’s ability to deal with the next wave of unrest, making investment in the relevant stations critical, he said.

“The Israeli Guard will be a skilled and trained force, which can act in a number of sectors simultaneously and deal with disturbances and emergency scenarios,” the police said.

The Guard will comprise three types of forces. The first will consist of conscripted and career Border Police officers, a force that has grown by hundreds of personnel this year. The second component will be 46 reserve companies, of which 20 currently exist and eight are being formed. Their equipment will be bolstered; it was found to be inadequate in 2021.

The third component will consist of volunteers, some on active duty and some in a reserve capacity. There are currently 8,000 volunteer reserve Border Police officers in the geographical periphery of the country, and this number will grow by another 1,500 by 2023. A new force, “Spearhead Companies,” will also be formed to provide 1,000 reserve volunteers by the end of 2022, and will grow to 2,000 personnel in 2023.

Finally, police stations will be reinforced by 3,500 personnel from the Israeli Guard.

At the time of the announcement, Barlev said the Border Police is the “first, immediate, and best answer to the issue of public security,” adding that the government had instituted a “revolution” in the force in the past year.

According to Levavi, the state needs to prioritize internal security just as it has done for defense against foreign rockets.

“The State of Israel built a multi-layered missile defense system that is unique in the world,” he said. “There is one layer that has been neglected over the years and not taken care of:  The layer on the ground.

“The incidents that emerged during ‘Operation Guardian of the Walls’ in the country, in mixed cities, on the roads, and in other areas, have proven that the State of Israel has to create an additional layer of defense to protect the Israeli home front, at zero altitude. Not against missiles and rockets, but against a popular uprising inside the country. Against the burning of cars, rock throwing, shooting attacks, arson attacks on apartments, and the blocking of roads,” said Levavi.

“The ‘Iron Dome’ that works at zero altitude is the Israel Police. It is the Israel Fire Service, Magen David Adom [paramedics] and ZAKA [search and rescue]. Israel’s security worldview has to include the domestic security agencies. These are agencies that have been a stepbrother to the military system over the years.

The uprising and rioting that took place during “Operation Guardian of the Walls” “reflected in a clear manner the massive gap between the state investment in the military and the insignificant investment in the police and domestic security agencies,” he warned.