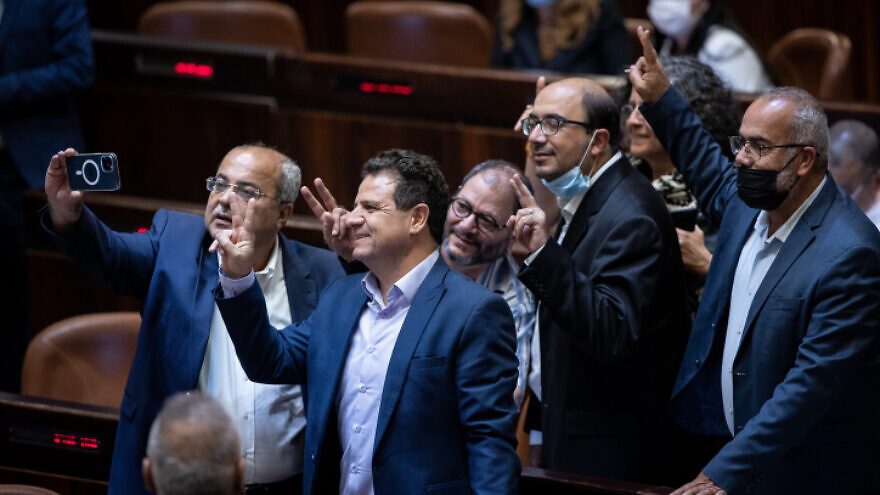 Members of the Arab Joint List take a selfie following a discussion on the "family reunification law", during a plenum session in the assembly hall of the Israeli parliament, in Jerusalem, on July 6, 2021. Photo by Yonatan Sindel/Flash90.
Republish this article
832 WORDS
Spread the word.
Help JNS grow!
Share now:

(September 28, 2022 / JNS) The Joint List, an alliance of three Arab parties—Hadash, Ta’al and Balad—disintegrated in dramatic fashion mere hours before the midnight deadline for parties to submit their final Knesset lists ahead of the upcoming election on Nov. 1. While there is debate about the reasons behind the split, analysts say the development likely will benefit opposition leader Benjamin Netanyahu in his bid to return to the prime minister’s chair.

Hadash-Ta’al will continue to run together, but Balad will run separately. The development puts Balad’s future in jeopardy, with a Channel 11 poll published following the split showing the smaller Arab party failing to garner enough votes (the minimum threshold is 3.25% of the total vote) to enter the Knesset.

“Presumably it improves the chances of a right-wing government,” Hillel Frisch, an Arab affairs analyst at the Jerusalem Institute for Strategy and Security (JISS), told JNS. “So far the polls have shown that the Joint List split raises the right-wing coalition from 57 seats to 60 seats. That is, however, still short of the 61-seat majority they need.”

Michael Milstein, head of the Palestinian Studies Forum at the Moshe Dayan Center at Tel Aviv University, told JNS that the breakup of the Joint List is a major development.

“Balad will get [votes equivalent to] maybe two seats, which means that they cannot get into the Knesset, because the limit is four seats. And it means that actually two seats are going to move to the right. So Balad is having a major impact on the whole political arena and the results of the election,” he said.

Milstein expects pressure to come to bear on Balad to pull out of the race so as not to throw away votes, with that pressure intensifying in the final weeks of the campaign. But he said it’s unlikely Balad’s leader, Sami Abu Shehadeh, will budge. He’s “hard-core and very ideological,” said Milstein.

While Frisch and Milstein agreed on the benefits to the national camp from the Joint List’s dissolution, they disagreed about the motives behind it. Both agreed that it was partly based on a practical argument over the No. 6 slot on the party list. The Balad member who occupied that spot, Mtanes Shahadeh, was moved to No. 7, Milstein said.

However, another possibility entertained by Israeli media—and which Frisch subscribes to—is that the main issue was ideological, with the Hadash and Ta’al parties warming to the idea of openly joining an Israeli government, something Balad resisted. While all three parties that made up the Joint List are “anti-state,” or anti-Zionist, Balad is considered the most extreme.

Hadash and Ta’al calculated it would be easier to make a deal with a center-left coalition without Balad, which would oppose such a move.

“Even if Balad leaders toed the line, their constituency is really radical and wouldn’t have let them,” Frisch said. “Balad is clearly caught in a bind because that constituency isn’t enough to push it past the electoral threshold.”

“Polls have shown that the overwhelming majority of Arabs not only want to endorse a government but also to become part of the coalition, as [Mansour] Abbas’s precedent showed,” Frisch added, referring to the head of the Ra’am Party, which had been part of the Joint List but broke away in 2021 to become the first Arab party in Israel’s history to join a governing coalition.

Lending further legitimacy to this version of events is that Ayman Odeh, the head of the Hadash Party, has in the past publicly entertained the idea of joining a government coalition.

However, Milstein rejects the theory, saying the “whole internal conflict” revolves around the order of candidates on the Knesset list.

“Many people here in Israel are trying to portray this event as an ideological one, [saying] that Ayman Odeh, the head of Hadash, and Ahmed Tibi, the head of Ta’al, are trying to find all kinds of ways to integrate into the political system, to promote dialogue with the Zionist parties like Yesh Atid and Gantz’s [Blue and White] party, but actually the reasons are very shallow, very narrow,” he said.

Milstein said the Joint List’s demise had been a complete surprise not only to him, but to the Arab public and even to the leaders of the party itself.

“Sometimes ego and emotional considerations are stronger than rational thinking,” he said. “I spoke with several Balad members and they all know they’re in trouble at the ballot box, but they say, ‘We are ready to fail but we will do so with pride and confidence.’ ”

Hadash-Ta’al and Ra’am also might fail to pass, he said, noting the low voter turnout expected from the Arab sector, which is fed up with its own parties. Milstein said that having no Arab representation in Israel’s parliament will exacerbate “Arab alienation” and could mark the start of greater tensions between Arab and Jews within the Jewish state.